Attempting to woo Minnie Mouse and other women whenever he can.

Mortimer Mouse is the secondary antagonist in the Mickey Mouse franchise. He is Mickey Mouse's pompous and egotistical rival, and he is also one of his generally more recurring enemies. Unlike Mickey's other rivals, like Peg Leg Pete or the Phantom Blot, Mortimer only specifically rivals Mickey for Minnie Mouse's affections (though, through different incarnations, he has had other antagonistic roles over the years).

He was voiced by Maurice LaMarche, who also voices Lrrr, Morbo and Leonardo da Vinci in Futurama, Father in Codename: Kids Next Door, Mr. Big in Zootopia, Alec Baldwin in Team America: World Police, The Brain in Animaniacs, and Yosemite Sam in the Looney Tunes franchise.

Mortimer is essentially a taller version of Mickey Mouse, and he seems a bit more human-like. Unlike his rival, Mortimer has whiskers, perhaps referencing how he has a ratlike persona. He has feet the size of Goofy's. Unlike most of the other mouse characters, however, you can see two large teeth close together, like a rat. He is usually wearing jeans and a shirt, but sometimes he also wears a hat. He always has got two large teeth, except in House Of Mouse, where he hasn't got two large teeth.

Mortimer is very obnoxious, argumentative, egotistical, arrogant, snooty and rude, so he is the total opposite of his rival. Mortimer is said in his youth to be Minnie's ex-boyfriend and she possibly left him due to his nature. While he claims he loves Minnie very much, he is shown to be an incredibly selfish narcissist, as seen in the cartoon "Mickey's Rival" where he leaves Minnie to be attacked by a bull that he provoked.

Not only that, he attempts to flirt with any female character on the screen which might also indicate the reason the relationship between him and Minnie was abolished. Mortimer can also be rather sexist and discriminatory, as seen in "Mickey's Rival Returns" where he feels that Minnie is only a prize to be won. It is unknown what he does but as well as being cocky and intransigent, he can also be rather annoying and vituperative.

In his first appearance, Mortimer was driving by and noticed Mickey and Minnie as they were having a picnic. Minnie is thrilled to see Mortimer once again. As soon as Mortimer walks up, Mickey already knows he is bad news just as Mortimer does not like Mickey at all so he attempts to humiliate Mickey and when Mickey shows Minnie how upset he is Minnie states that he is just jealous. Mortimer then tries to impress Minnie by annoying a bull that is over a fence. The plan works until the bull finds a way out. Mortimer rushes and drives away in his car and leaves Mickey to rescue Minnie who eventually remembers why she left Mortimer in the first place.

Mickey's Once Upon a Christmas

Mortimer makes a brief appearance in the direct-to-video film Mickey's Once Upon a Christmas. Here, Mortimer is the snooty, profound and wealthy owner of Mortimer's Department Store, and he speaks with a profound tone. Minnie Mouse and Daisy Duck are notable employees of the store, and judging by Minnie's low-budget lifestyle, he does not pay well. In his scene, Minnie hopes to earn the Christmas bonus for her extra-hard work, so that she may pay for a wonderful present for Mickey. However, Mortimer only gives her a fruitcake, leaving Minnie without money to buy the gift. He is voiced by Jeff Bennett.

In this series, Mortimer is once again the main antagonist along with Pete. Here, Mortimer is Mickey's neighbor and is still competing with Mickey to win Minnie Mouse's heart. In the series, Mortimer is apparently wealthy having far more advanced technology than his rival. One of Mortimer's most villainous roles was in the cartoon Big House Mickey where he accused Mickey of robbing his house having Mickey sent to prison. Mortimer made a guest appearance in the Pluto segment 'Pluto Gets the Paper".

Mortimer's first appearance in the series was the cartoon "Mickey's Rival Returns'. In this cartoon, Mortimer and Mickey compete with each other in volleyball. The winner gets to ask Minnie on a date. Originally, Mickey refused the idea being that it would be using Minnie as "some kind of trophy", but Mortimer's arrogance angers Mickey into competing. Mickey wins, but Mortimer reveals the competition prize to Minnie having her believe Mickey thought of her as a prize. Minnie instead leaves with Mortimer but at the date, he begins to harass her for a kiss. Fortunately, she is saved by Mickey who she forgives and has a beach dinner with. He was voiced by Maurice LaMarche.

In the television series House of Mouse, Mortimer gets a role as a recurring character. Mortimer appears many times as a guest and tries to trick Mickey or Minnie into breaking up. Despite his attraction to Minnie, in the series pilot episode, Mortimer appears but is seen flirting with Donald Duck's girlfriend Daisy Duck instead, implying that he tends to do this with most of the women in the club, which is confirmed in later episodes as he is seen also trying to flirt with Meg and the Ugly Stepsisters.

Mortimer proves to be hated by mostly all of the guests at the club, ranging from heroes to princesses and villains, despite Mortimer being one himself; it is even indicated in the episode "Pete's Christmas Caper" that the cruel Pete has a disliking towards Mortimer for his obnoxious behavior. The hatred Mortimer receives from the other guests likely comes from his rude failed attempts to woo various female gusts and from the lack of respect, he gives to the Club's hosts, particularly Mickey, as shown in "Everybody Loves Mickey", in which he makes various rude and unfunny jokes about Mickey on Open Mic Night and is booed and frowned upon by everyone in the club. Even Donald (who is jealous over the attention that Mickey's having) can't stand listening to Mortimer's jokes and literally throws him out of the stage, earning a lot of praise from the audience.

Arguably, Mortimer's most notable appearance in the series is "The Mouse Who Came to Dinner", in which he tricked Mickey and friends into believing he was a restaurant critic, and he forced them to treat him like a prince or he'd give them a negative review which could close the club. Mortimer is foiled when Lumière is revealed to be the actual critic and he is severely beaten by him, Gaston, The Giant and kicked out of the club during his "Celebrity Roast". He was voiced by Maurice LaMarche.

Mortimer appears in the CG animated series Mickey Mouse Clubhouse. He has a non-speaking role in Minnie's Birthday seen sitting beneath a tree, playing the guitar. In this appearance, Mortimer wears the orange shirt from Mouse Works with yellow polka dots, blue pants, and yellow shoes. He was also seen sleeping and sunbathing on the ground.

Mortimer makes his first proper appearance on the series in the special "Super Adventure!" as the main antagonist. Here, he has a supervillain alter ego named Megamort, who plots to take over the Clubhouse by shrinking all the landmarks and storing them within his zeppelin lair. During some time of plotting, Mortimer forced humble Pete to act as his minion, ordering him to go around and proceed with his bidding. When the problem reaches Mickey and Friends' attention, Professor Ludwig Von Drake creates a machine that transforms the clubhouse gang into a team of superheroes.

Successfully, they retrieve the shrunken landmarks but causes Megamort's blimp to go haywire in the process, putting Megamort in great peril. Mickey concocts a plan to save the villainous mouse, and Megamort, being eternally grateful, apologizes and redeems himself, revealing that his real name is Mortimer Mouse, and that he's the clubhouse newest neighbor. He was voiced by Maurice LaMarche.

In the Mickey Mouse shorts, Mortimer makes a brief cameo in the short entitled "No". In the short, when Mickey begins to realize that he quite literally can't say no to anyone, Mortimer takes advantage of the situation by asking Mickey if he can have his girlfriend and disappears before Mickey can respond. Later, as all of the people Mickey helped out return the favor, Mortimer, while using crutches, returns with Minnie and tells Mickey that he can keep her, implying that he was severely beaten by her.

He reappeared n "A Pete Scorned", when Pete thought that Mortimer took his place as Mickey's most hated bully, causing Pete to fall into a depressed state. Mickey tries to help Pete, but Mortimer sabotages Mickey's plans by continuing to bully him. When Mickey boasts that Pete is a better bully than Mortimer, Mortimer begins insulting Pete while continuing to pick on Mickey, causing Pete to angrily punch Mortimer into the sky, thus reclaiming his place as Mickey's archenemy.

In "The Brave Little Squire", Mortimer appears as a knight in the Middle Ages who chooses Mickey as his squire. However, it is then revealed that Mortimer is a coward who lets others do the work for him while taking all the credit. When a dragon appears and attacks the castle, Mortimer runs away, thus showing his true colors to everyone. He is then stripped of his knighthood while Mickey is knighted for driving away the dragon.

He was voiced by Paul Rudish in "No", and by Jeff Bennett in A Peter Scorned.

Mortimer was called Montmorency Rodent in many comics. In his first incarnation, he was called "Mr. Slicker" and appeared in the comic serial Mr. Slicker and the Egg Robbers. When Minnie Mouse's father, Marcus is in danger of losing his ranch eggs, Mr. Slicker offers aid financial return for Minnie's hand in marriage, and Mickey suspects him. In the end, Mickey proves it was Slicker who was behind the thefts. Mortimer sometimes teamed up with Pete the Bad and Sylvester Shyster, who, like Mortimer, also wants to win the love of Minnie. In some of the Disney Comics both out of state and the US it was shown that Mortimer is rich and lives in a mansion, and he can also fly a plane.

The cartoon short Mickey's Rival was also made into a comic book. In the comic book version, the story is different. Mickey goes over to Minnie's house to visit, only to be greeted by Mortimer, who is also visiting Minnie. After Minnie introduces him to Mickey, Mortimer proceeds to make Mickey look like a fool in front of her. Each day, he keeps pulling pranks on Mickey in hopes of getting rid of him. In the end, though, Mickey got the better of him and Minnie kicked Mortimer out.

Mortimer appeared in the GameCube game Disney Sports Soccer, Football and Basketball. He is also in Disney's Golf as a secret character.

Mortimer has not yet made any live appearances in the Disney theme parks. However, a mural with several classic Disney characters during the Disney California Adventure expansion was seen with Mortimer being one of the characters featured. Also at the park, Mortimer's namesake is featured in the shop Mortimer's Market which is located on Buena Vista Street.

Mickey and the Roadster Racers

Mortimer appears as a famous actor called Morty McCool, who acts as a hero on television. However, it is revealed that his heroic personality television was just an act, as he is actually selfish and arrogant. 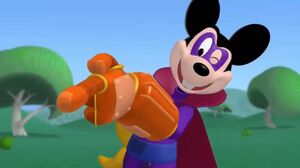 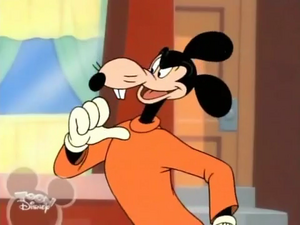 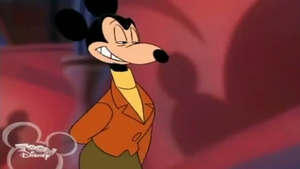 Mortimer in House of Mouse. 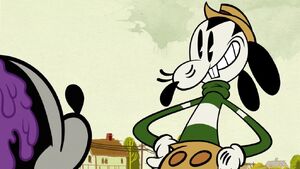 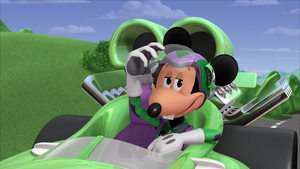 Mortimer as Morty McCool in Mickey and the Roadster Racers. 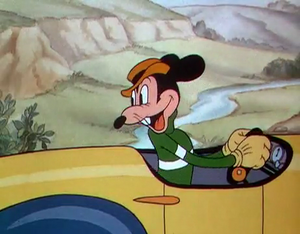 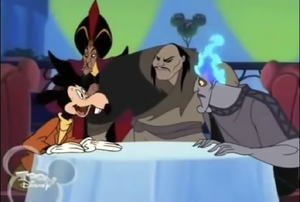 Mortimer Mouse with the Disney Villains, Jafar, Hades and Shan-Yu.
Add a photo to this gallery

Retrieved from "https://villains.fandom.com/wiki/Mortimer_Mouse?oldid=4194242"
Community content is available under CC-BY-SA unless otherwise noted.