Captain in the Dunwall City Watch

Drinking with his friends from the shooting club.

Successfully assist Delilah in taking over Dunwall (all failed).

Mortimer Ramsey is a villain in the 2016 videogame Dishonored 2. He is encountered in the first mission, A Long Day in Dunwall.

Ramsey is a member of the Dunwall city watch who, due to a grudge against the Empress for his family's fall from aristocracy, joins Delilah Kaldwin's conspiracy against Corvo Attano and Emily Kaldwin. Together with other corrupt watch officers, Ramsey assists Delilah in taking over Dunwall Tower and is eliminated by either Emily or Corvo.

He is voiced by Sam Rockwell who also portrayed Justin Hammer in Iron Man II and William Wharton in The Green Mile.

At the ceremony for the fifteenth anniversary of Empress Jessamine Kaldwin's death, Ramsey is the first one to welcome Jessamine's daughter and current empress Emily Kaldwin into the hall. He heralds her arrival to the men and women present for the celebration and, together with her father Corvo, accompanies her to the dais.

Before the ceremony can start, Ramsey announces a special guest, the Duke of Serkonos. When Duke Luca Abele and Delilah arrive moments later, Delilah reveals herself as the bastard daughter of Emperor Euhorn Kaldwin. She claims to be the rightful Empress and claims that Emily and Corvo are behind recent murders in Dunwall. Together with Ramsey and corrupt guards answering to him, Delilah then usurps the throne. Corvo rushes forward to defeat her. Emily is about to assist him but is held back by Ramsey. To get to her father, Emily smacks Ramsey in the face who in turn backhands her causing Emily to fall down the dais.

In the resulting struggle, Corvo is disarmed and Delila tosses his blade to Ramsey. Eventually, either Emily or Corvo is attacked by Delilah and turned to stone. The remaining one is taken down by Ramsey who is tasked to bring him or her to Coldridge Prison. On his way, Ramsey encounters Emily's loyal guard captain Alexi Mayhew who is unaware of the coup. Only seeing Ramsey carrying the wounded Corvo or emily, Alexi rushes forward to help but when she tries to do so, she is stabbed in the stomach by Ramsey.

Ramsey then delivers Emily or Corvo to their room where he is to lock them up until the chaos is over. Before he leaves, he recalls the legend of the Empress' safe room which is said to be filled with gold. Recalling that his family lost their status years ago and that he is now forced to wear a city watch uniform and to chase kids out of parks instead of drinking with his friends from the shooting club, Ramsey takes the Imperial Signet Ring from Corvo or Emily, which is the key to the safe room. He then leaves the room.

Emily or Corvo is able to escape through the window, arriving in a different part of Dunwall Tower. He or she attempts to escape the tower through the secret exit in the saferoom and, to be able to do so, needs to get the ring back from Ramsey. Meanwhile, Ramsey has returned to the throne room where he talks to the treaonous guards. He then starts searching Dunwall Tower where Corvo or Emily must defeat him. Ramsey can either be killed or be rendered unconscious and imprisoned in the safe room which is filled with enough water and food to keep Ramsey alive until the protagonist's return. If he is imprisoned, he will have been petrified by Delilah during the return of the protagonist. 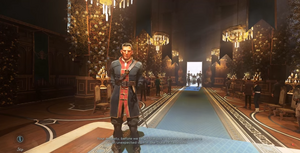 Ramsey announces the Duke of Serkonos. 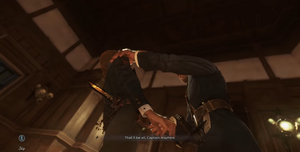 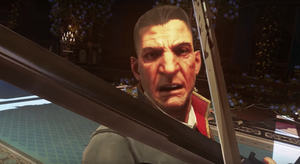