Searching for a source of power (Team Turbo).

Gain Connect-Tek to make himself stronger and immortal (first backfired, but then succeeded briefly).

Mortum is the main antagonist in Team Turbo and Team Turbo Fusion-Tek of the Max Steel franchise.

He was voiced by Scott McNeil.

At the beginning of the film, Mortum attacks N-Tek battleship Daedelus Platform, causing it to crash. Before anyone could escape, however, Mortum appears, announcing himself as their villain. N-Tek fights Mortum head on, but Mortum easily overpowers them. He then goes over to Jim McGrath, whom he defeated, and demands a device from him known as Connect-Tek. However, Jim refuses, as he chooses N-Tek's secrets to die with themselves. Mortum, on the other hand, proceeds to teleport himself and everyone away from the Daedelus Platform as it soon crashes, which Max soon discovers in its wreckage.

At Mortum's base, where he has all of the N-Tek agents in torturing chambers, Mortum contacts Toxzon, Extroyer, and the Elementors and forms a deal with them to raid N-Tek bases and find the Connect-Tek for him in exchange for the rest of N-Tek's technology.

Extroyer begins his raid at N-Tek base World 31, where Rayne is witnessing him salvaging the base and contacts Max Steel. Once Max arrives, he sees Extroyer talking to a projection of Mortum, informing him about Mikinian symbols that he has found and could not decipher. Nonetheless, Mortum orders Extroyer to continue his search, before ending their transmission. However, Extroyer soon ponders about keeping Connect-Tek for himself after realizing how powerful it is for Mortum to have it.

Mortum later discovers Max Steel entering the N-Tek base, Ice Box, as the Mikinian symbols lead him there. Mortum informs this to the Elementors and dispatches them. Once Max arrives at the base, along with Cytro, Rayne, and Alejandro, they discover Connect-Tek after fully deciphering the Makinian symbols. After learning about Connect-Tek's capabilities from a hologram of Jim McGrath, the Elementors soon arrive and begin their attack on the base. This prompts Max to use Connect-Tek on his allies, giving them Turbo based powers and forming them as Team Turbo. Team Turbo use their special abilities to fight the Elementors, which they gain the upper hand on them at first, but one of the Elementors managed to acquire Connect-Tek during the fight. The Elementors then defeat Team Turbo, but they soon fight over Connect-Tek, as they decide to keep it for themselves.

At his base, Mortum releases Connect-Tek from its case, as he begins his preparations with it. However, Team Turbo soon appear after they reveal a homing beacon inside the case to Mortum. Mortum, however, forms a barrier around N-Tek and sets his base to self-destruct. He then teleports while escaping, but not before Max could slice through Connect-Tek. Team Turbo soon stops the countdown and rescues N-Tek.

Mortum appears before his two protege scientists and tells them how he underestimated Max Steel, but congratulates himself for obtaining Connect-Tek. As one of his scientists ask Mortum why the device leaks, Mortum becomes shocked to discover it damaged. Suddenly, Connect-Tek goes out of control as it releases its energy. Mortum's two scientists flee from the scene while Mortum continues to hold Connect-Tek and cries in pain.

Following the events of the previous film, Mortum is buried within the ground until he resurfaces as a zombie with Connect-Tek embedded within his head. He then comes across two people wandering by and drains their brain energy, turning them into zombies while replenishing himself.

Mortum makes his way to his base, where he transforms many of his associates into zombies and then encounters his two henchmen from the last film. The two are shocked to discover Mortum has survived before one of them is transformed into a zombie by Mortum, who replenishes himself with his brain energy. Mortum explains to his remaining protege that he becomes stronger whenever he absorbs brain energy and thus plans to transform the whole population into zombies.

Team Turbo soon encounters Mortum's zombies in Copper Canyon and battles them. While fighting, Team Turbo witness the zombies stop and send out energy flowing from their bodies that head to a commonplace. After acknowledging that the zombies can transform humans into them, Steel scans the zombies in their process to create brain shields to protect Team Turbo. Team Turbo then follows the zombie's brain energy to Mortum's location.

At Mortum's base, Mortum is seen absorbing the brain energy into his mouth. He then proceeds to feed on his final lab assistant, much to his horror, until he is stopped by the arrival of Team Turbo, whom seemingly destroys Mortum with ease. Team Turbo manages to save Mortum's associate, who is forced to tell them about Mortum's origin.

The scientist explained that he once worked with Mortum, who was a brilliant scientist, but he saw his mortality as a limitation to his genius. When he heard about Connect-Tek, he planned to connect it to his brain to turn himself into an immortal. However, once he acquired Connect-Tek, his plan backfired and transformed him into a “soulless monster.” After knowing this, Steel realized that since Mortum is now composed of Connect-Tek, he now has the ability to recreate himself in endless combinations, in which Mortum then reappears in an arachnid-like appearance. Team Turbo takes him on again, but Mortum overpowers them in his new form. He then proceeds to drain their brain energy until Steel finally manages to form brain shields around their heads. However, Mortum soon discovers Steel and captures him before he destroys his base while leaving Team Turbo there.

At a local mountain, Mortum with his army of zombies witness the military, ordered by Commander Kilgore, plan an aerial assault on Copper Canyon, much to his amusement. He then rises a temple from the ground while announcing his plan about how he will change the world and the future. His zombie hoard then presents Steel to him, who mocks at Mortum. Mortum continues to proclaim his plan to Steel, but then stutters as he automatically glitches, in which Steel taunts that there is a hole in his bucket. Mortum explains to Steel that he cannot contain the brain energy he absorbed for long, so he then begins to dissect him to find a solution to it.

After Team Turbo escaped Mortum's fallen base, they withdraw at Rayne's old family house. Once Max regains consciousness there, he informs his teammates that he can sense Steel in danger through a mental connection between them. Just then, one of Mortum's zombies suddenly approaches Alex and attacks him from behind. Team Turbo fight the zombie, but are unable to activate their modes due to Mortum's interference. Luckily, they are still protected by the brain waves that enables them to defeat the zombie.

Once they capture the zombie, they head to an underground laboratory where they strap in the zombie to learn the about Mortum's whereabouts. However, a zombie hoard approaches outside the house, forcing Team Turbo to fight them off with blasters while Cytro is offline and connected to the zombie. Team Turbo soon struggle as the hoard comes nearer into the lab until Cytro finally locates Mortum's coordinates and flies them there.

Once they arrive at Mortum's temple, they are shocked to discover Steel dissected. As they ask him where Mortum is, Mortum suddenly appears from the ground, telling them he is everywhere. Team Turbo fights him to no avail again, this time Mortum now learns information from Steel about their techniques and abilities, in which he uses the knowledge to deactivate Cytro. He then buries Alex and Rayne and prepares to feast upon of their brain energy. Though they were protected by brain shields, Mortum also uses his knowledge from Steel to destroy it from them. He then detains Max and unveils his plan is to reform the planet and transform everyone into zombies. He leaves Max as the last person to remain, as he declares himself as the last thing he ever sees. However, Kilgore's men initiate their attack as they drop a nuclear bomb above Mortum's sanctuary. In spite of that, Mortum projects a massive energy shield around him, protecting him from the explosion. He then fires an energy beam at the military plane, destroying it. After he discovers Max had escaped with Steel, he orders Team Turbo to resurface as his zombies, now with new powers and modes, giving them the task to find Max Steel.

Max retreats to Copper Canyon as he repairs Steel. There, he discovers Team Turbo as zombies and with new abilities. Team Turbo tells Max to either join them in Mortum or be destroyed and then chased him in the sewers. Once Max reconciles with Steel, he uses his Turbo mode to fire darts at each team member's head, freeing them of Mortum's control and allowing them to keep their new powers, though they are also linked to Max's mind as to what he was about to say.

Team Turbo returns to Mortum's sanctuary while he is feasting upon every mind on the planet, giving them the chance to attack him. However, Mortum rebuilds himself again in enormous form, now compromised of zombies. As Team Turbo takes cover from him, Steel explains to them that Mortum built himself a brain bank to contain all his brain energy. They also learn that striking Mortum in the chest where a sphere of energy is stored will expose the brain bank. Mortum unleashes his zombie hoard upon Team Turbo while he faces Max Steel in the final battle. Realizing their mental link, Rayne shares her new mode and powers with Max, inspiring the rest of Team Turbo to do the same, empowering Max and enlarging him to Mortum's size. In his new form, Max uses Team Turbo's abilities to continue fighting Mortum. As Mortum tries to fight back by firing his energy at him, Max closes in on him while he shields himself. He then strikes Mortum in his energized chest, exposing Connect-Tek and the brain bank from him which Max then destroys with his Turbo energy, ending Mortum once and for all, and reverting every person back to normal. 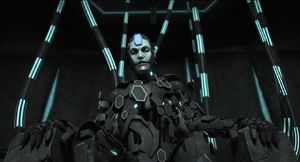 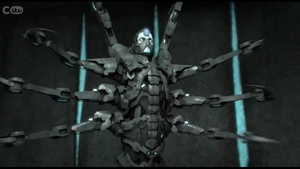 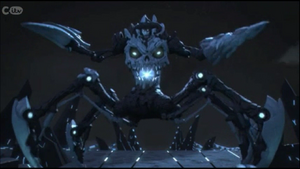 Turbo Scorpion Mode
Add a photo to this gallery 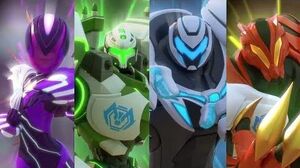 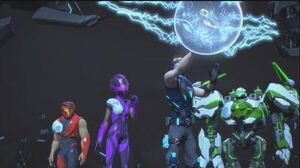 Retrieved from "https://villains.fandom.com/wiki/Mortum?oldid=3774602"
Community content is available under CC-BY-SA unless otherwise noted.