Villains Wiki
Register
Don't have an account?
Sign In
in: Partners in Crime, Cartoon Villains, Movie Villains,
and 28 more

Redeemed Minions
Morty and McGurk are supporting antagonists in the 2012 computer-animated film adaptation of The Lorax. They are a twin set of bodyguards who work for their boss Aloysius O'Hare.

Morty was voiced by Jeff Bennett, while McGurk had no voice actor.

Morty and McGurk seem to lack any evil personality at all and are bulky characters. They are very kind, loyal, sincere, respectful, and understanding to O'Hare until the end of the film.

Morty and McGurk are never differentiated and were only mentioned by name once, by O'Hare himself while he tries to take the seed from Ted's house. However, Morty's glasses' lenses are square-shaped, whereas McGurk's are circular.

They do not speak that much (though Morty grunts and says "Ooh.", when he bumps into O'Hare with the O'Hare van).

In the end, even Morty and McGurk turn against O'Hare, with McGurk ejecting their former boss out of town by way of his rocket helmet. He is also the one O'Hare is seen with most frequently and perhaps is preferred over the other. 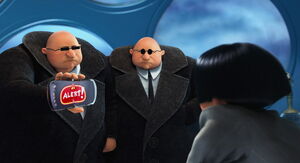 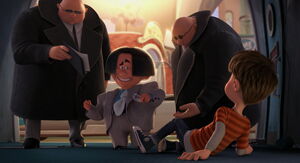 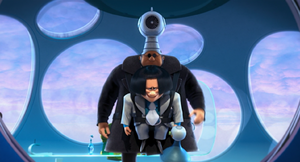 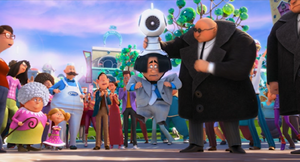 O'Hare's defeat: Getting launched out of Thneedville by his henchmen.