Tracking down other demons for him to absorb.

Destroy Inuyasha and his friends and Naraku.

Moryomaru was a demonic construct in Inuyasha, and therefore was not an incarnation of Naraku. He first appeared in chapter 339 of the manga and episode 165 of the anime. He is specifically created to work against Naraku by The Infant.

He was voiced by Ross Douglas.

When The Infant began plotting to betray Naraku, he needed a protective armor of sorts, prompting he and Hakudoshi to construct one. They stole haku from demons, the part of the soul that enables movement, to give it sentience, and used their flesh to create the armor. Naraku was seemingly unaware of the plot at the time, and knew that his enemies had discovered that The Infant was his heart, so he stole the Fuyoheki in order to conceal his heart's demonic aura. The Infant was then placed inside the newly-constructed golem. Much like Naraku, he was able to absorb others and gain their strength, and the first he did this to was Goryomaru, a demon-slaying monk. Hakudoshi told Kagura to release Goryomaru, whom she had presumed dead, and successfully guessed that Hakudoshi planned to betray Naraku. She discovered The Infant's plot and betrayed them, and Hakudoshi was killed in the ensuing battle. He goes off on his own to collect Kohaku's shard and discovers that he had recovered from his amnesia.

After Hakudoshi's demise, Moryomaru sought to increase his power by absorbing demons. His first targets were Koga and Sesshomaru. Although he failed at absorbing both, he is responsible for breaking the latter's sword, Tokijin. His first successful absorption was that of a turtle yokai named Meioju, gaining its armor. He allows Inuyasha to strike him with his Adamant Barrage, absorbing the crystals into one of his arms.

Having achieved his final form, Moryomaru eventually makes his move to destroy Naraku by devouring him, but the latter counters by devouring the construct instead, thus killing both The Infant and his protective suit. 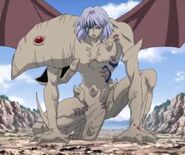 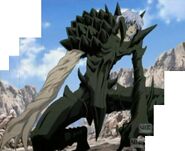 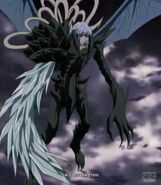 Retrieved from "https://villains.fandom.com/wiki/Moryomaru?oldid=3728309"
Community content is available under CC-BY-SA unless otherwise noted.