Hoodwinked Too! Hood Vs Evil

Brutish Troll
Moss is a minor antagonist in Hoodwinked Too! Hood vs. Evil.

He was voiced by David Alan Grier.

Moss is first introduced when he growls at Red on his bridge. Red is slightly scared and nervously greets Moss, who then asks Red if she thinks she can deliver her basket of goodies across his bridge, and after Red says "yes", the angry troll says that there is no way she can cross his bridge and orders Red to leave. However, Red then challenged Moss to a fight. Moss then laughed evilly and grew two extra arms holding weapons. He tried to hit Red with his weapons and hands. Red lost her basket, which fell of the edge of the bridge, but recovered them after she used her hood as a bungee cord, which was tied to Moss. Red made it back and began to leave and cross the bridge, but Moss started taunting her. Moss said that her granny would be ashamed of her of just retreating. Red gets so angry and comes back and started hitting Moss very hard. However, unknown to Red, her basket fell off the bridge right after Red finished off Moss. Moss fell to the ground, in a dazed state, and started muttering out random things. It was found out that it was a training exercise when a Sister Hood member came out from the mist and told Red that she failed. Moss was actually one of the tutors for the Sister Hoods. Moss was then carried away by the Sister Hood members as he probably heads to the infirmary.

It is unknown what has happened to him afterwards, as he is not seen again for the rest of the film.

Moss is known for being a sadistic and competitive brute. He is a giant troll who kills anyone who tries to cross his bridge. However, in one scene in the sequel, when Moss tried to kill Red in a fight, Red was able to defeat the massive troll with her Kung Fu moves and then crossed the bridge.

Moss is a giant, overweight green troll with four arms. He wears white wristbands and a white loincloth. He often carries a big club and hammer. 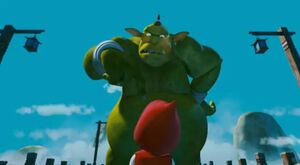 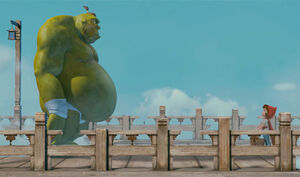 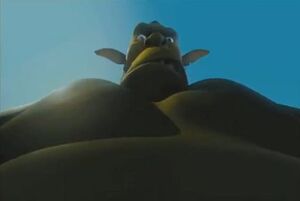 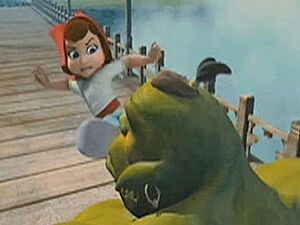 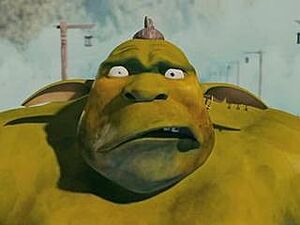 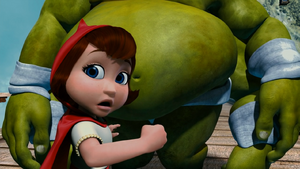 Retrieved from "https://villains.fandom.com/wiki/Moss_(Hoodwinked)?oldid=3895283"
Community content is available under CC-BY-SA unless otherwise noted.