Owner of the second robot factory

Power-Mad AI
Mother is the main antagonist and final boss of the Nitrome browser game Toxic 2. It is an AI who leads the army of robots in the game.

Mother appears as a cylinder with a transparent, possibly glass semi-circular head. Its body consists of rock and is attached to the ground via connecting pipes. The inner edges of its body have been partially destroyed, making a C shape.

At an unknown part of time (possibly after the destruction of the first robot factory), Mother either built the second robot factory or assisted in its building. It is unknown how she obtained the factory to herself nor is it known what events took place between the two Toxic games. Hazmat Hero teleported to the factory with the intention of destroying it. Once Mother found out about this, she banned the computer person who had been backing up the protagonist from communicating with him in certain levels and possibly toyed with the player character, allowing him to survive the onslaught of robots before he makes it to the final level.

Once confronted, the Mother starts a battle with the Hazmat Hero whom she tries to take down by shooting lasers, making debris fall and firing rockets. However, Hazmat Hero manages to take advantage of Mother's C parts and pink heart to destroy Mother and the factory. 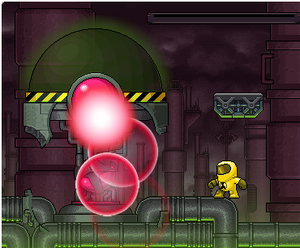 Mother blowing up after all health is lost.
Add a photo to this gallery

Retrieved from "https://villains.fandom.com/wiki/Mother_(Nitrome)?oldid=3513303"
Community content is available under CC-BY-SA unless otherwise noted.