Overseer of life in the Algol Solar System

Terraforming and controlling all aspects of the environment

Rid Algol of it's native inhabitants.

Mother Brain is the main antagonist and final boss from Phantasy Star II.

The Mother Brain is a supercomputer, originally introduced into the planets of the Algol Solar System with the apparent intent of making life better for all it's inhabitants, though nobody had any idea who exactly built it. Her core was set up in the space colony Noah, which communicate with the planets through station towers spread on the planets. Thanks to the Mother Brain, The planet of Palma was turned into a futuristic utopia, while the once arid planet of Motavia was terraformed and became lush with grasslands and oceans. The only planet where Mother Brain isn't introduced is on Dezoris, since the Dezorians had a general distrust of machines, which made the planet become isolated and the Palmans who resided there to migrate back to Palma and Motavia.

With time, Mother Brain started to fulfill it's true, unknown purpose. After a accidental collision between two spaceships, all space travel was banned, cutting off all communication between the three planets. Years later, biomonsters would start to plague Motavia, so the Commander of Motavia sends the protagonist Rolf to investigate the Biosystems Lab, which Mother Brain used to breed new life, and discover why was it producing biomonsters. Rolf is joined on his mission by other people who hear about his mission.

Retriving a data card from the lab, Rolf learns someone has tampered with the Climatrol, a structure which controlled the climate on Motavia. Once there, he learns a newman (artificially engineered human) called Neifirst was responsible. Once Neifirst is defeated, however, Climatrol goes haywire, pouring all rain water over the planet and threatening to flood everything. Rolf and his friends are blamed for the incident, so Mother Brain sends an army of robot minions to capture him. They're captured while trying to open the dams to stop the flooding and taken to the Gaira satellite. Mother Brain hijacks the satellite's systems, making it plunge on a crash course with Palma, and though Rolf and his friends are rescued by a space pirate, the satellite falls down on Palma, destroying it.

Returning to Motavia, Rolf uses the only remaining spaceship there to travel to Dezoris, where he meets with Lutz, one of the heroes from the first game who had been in cryogenical sleep. Lutz transports Rolf and his group inside of Noah, where they finally confront Mother Brain. Upon destroying it, they meet with the Earthlings and learn they created Mother Brain with the intent of making Algol's inhabitants weak and cathartic, after which they could easily get rid of them and conquer the entire system for themselves. The destruction of Mother Brain would cause a long period of decline known as the Great Collapse, where the population would get drastically reduced and technology returned to a more primitive state. 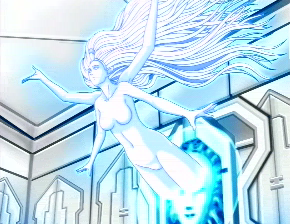 Add a photo to this gallery
Retrieved from "https://villains.fandom.com/wiki/Mother_Brain_(Phantasy_Star)?oldid=2940747"
Community content is available under CC-BY-SA unless otherwise noted.