Bring other demons to Earth (failed)

The Mother Demon is the main antagonist of Doom 64. She only appears in the final level The Absolution. After she is killed, the Marine decides to remain in Hell to ensure no demon ever rises again.

The Mother Demon appeared in an old relay satellite, battered by neutrons and quarantined by massive levels of radiation. When her presence was made, the satellite activated and sent a message to Earth. Her presence came with many monsters and though their energy signatures were caught, the Mother Demon used the radiation levels to escape detection. She has rejuvenation powers and whenever she walked by a corpse of a monster, it was systematically brought back to life. It also made them stronger than before.

The Mother Demon leaves three trails of flames at her opponent whenever they hit her. She may use her tail to launch them into their air. She prefers to simultaneously fire four homing projectiles. They are more fatal than a single rocket. Despite her large size, she is able to move quickly by levitating her body. She has the ability to summon other demons. They will aid her in battle. Despite her strengths and abilities, she is vulnerable to the BFG 9000. A few precise shots can easily destroy her. The Mother Demon's attack consists of powerful flame trails, followed by a set of 4 homing fireballs which split up when they hit something. She is the fastest demon in Doom 64.

There is a possible reference to the Mother Demon in Doom 3: when the marine opens the PDA after obtaining an audio log in the Dig Site, there is a mention of a demon that is said to have given birth to all other demons, though the demon is actually never seen in the game.

In Doom (2016) in the main room with the tanks filled with demons and in the room behind Dr. Olivia Pierce's office where the Soul Cube (which is unusable) can be found and the hologram of the Doom Slayer's tomb along with his suit, there is a fetus version of what looks similar to the Mother Demon. These creatures are located in the tank closest to the Soul Cube but does not move or attack as she is not fully grown. These appear to be immature versions of the gremlin or the Abaddon pilot seen in the Art of Doom, but those creatures especially one form of the Abaddon pilot look to be inspired by Doom 64 Demon Queen.

A monstrosity in her own right, the Mother Demon appears as a large demonic larva with dead black eyes with red irises, four arms, a skull-like face and small mouth filled with many long, sharp teeth. It has no wings, yet moves by floating around above what appear to be vestigial legs. She makes a cry of discovery upon being roused, a ghastly snarl when moving about and a shriek like a banshee when she is damaged. 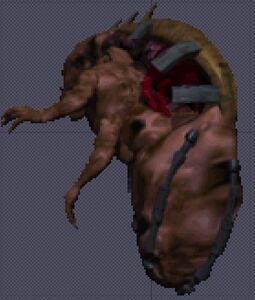 Side of Mother Demon. 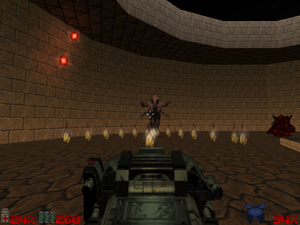 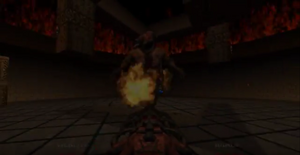 Second Fetus
Add a photo to this gallery

Retrieved from "https://villains.fandom.com/wiki/Mother_Demon?oldid=4132269"
Community content is available under CC-BY-SA unless otherwise noted.