Mother Gothel (Once Upon a Time)

Leader of the Coven of the Eight

Tending to her garden

Plotting human genocide
Ruling the Coven of the Eight

To escape the Tower (succeeded).

To assist Drizella (formerly).
To eradicate all of humanity (failed).

Attempted genocide and multiple others

Mother Gothel is the main antagonist of Season 7 of ABC's Once Upon a Time. Mother Gothel is an evil witch, who is the leader of the Coven of the Eight and the mother of Alice.

She is portrayed by Emma Booth.

Gothel is a Tree Nymph who is destined to take the mantle of Mother one day. One day, she meets Isla , Seraphina and two other women, who claim they are fine with her having magic and invite her to Lord Adriel's ball that night. Despite Mother Flora's warnings for her to stay away from the humans, claiming they are irrational creatures, Gothel attends the ball anyway.

After Isla takes Gothel and the others to an abandoned greenhouse so Gothel can teach them magic, Gothel magically makes a flower bloom. Just then, Isla reveals her true colors by stepping on the flower and having the two other women hold Gothel. Not only that, but she also dumps mud on Gothel, mocking her for being an abomination, before stealing her key and leaving with the others, though Seraphina regretfully looks at Gothel before leaving.

Gothel later returns to the tree nymps' home to find that Isla had let other humans there and that they killed all of the tree nymphs. After sharing a final moment with Flora, she returns to the ball and murders Isla by snapping her neck with roots.

Once Seraphina reveals that she has magic too but hid them in fear of being persecuted, Gothel permits Seraphina to join her. She then kills all of the humans in the realm, revealed to be the Land Without Magic, and leaves to the New Enchanted Forest with Seraphina, vowing to get her revenge on humanity once they come back.

Thousands of years later, when Rapunzel is caught stealing vegetables from Gothel's garden, Gothel imprisons her at the top of a tower. However, Rapunzel manages to escape by using her extraordinarily long hair, and uses some of Gothel's own magic to trap her in the tower instead.

Some time later, when Captain Hook climbs the tower looking for magic to imprison Rumplestiltskin, Gothel disguises herself as Rapunzel to seduce him and become pregnant. Magically speeding up the pregnancy, Gothel gives birth to a baby girl who she abandons in the tower so as to become free herself. Forming a coven of powerful witches, Gothel frees Rapunzel's wayward daughter Drizella from a spell that trapped her as a statue.

Drizella joins Gothel's coven, and together they magically poison Henry Mills so that her mother Regina is forced to cast the Dark Curse that sends everyone to Hyperion Heights, Seattle. Victoria Belfrey keeps Gothel prisoner at the top of Belfrey Towers. Victoria wants Gothel's help to revive Anastasia, but when Gothel refuses and threatens her, Victoria gathers herbs to appease her and acquire her help in uprooting Lucy's belief.

However, Gothel is secretly in league with Victoria's daughter Ivy, and helps her awaken Regina from the curse. When Rogers discovers that Victoria is involved in the case of the missing "Eloise Gardener", he tracks her down and discovers Gothel captive. Rogers rescues Gothel, and has Victoria arrested for kidnapping her. Victoria manages to evade imprisonment and successfully revives Anastasia, only for Gothel to trap Victoria in an underground prison so that Anastasia can be indoctrinated into Gothel's coven.

Gothel then betrays Ivy by having Anastasia steal her magic, before Gothel imprisons Ivy with her mother. Gothel later tries to use a ressurection amulet to sacrifice Ivy's life for Lucy's only for Victoria to take her place instead. After Anastasia leaves the coven upon making amends with Ivy, Gothel indoctrinates Tilly, Alice's cursed counterpart, in it instead, planning to use her to cast a spell that will exterminate all of humanity.

After the Dark Curse is broken by Henry when he gives true love's kiss to Regina, Tilly stands up to her mother, declaring that while Gothel chose hate, she chooses love. An infuriated Gothel attempts to kill Tilly with an energy blast, but Tilly counters it with her own energy blast and strikes Gothel instead. Gothel is transformed into a tree, and Tilly sympathizes with her before creating hyanith flowers on the roots of the tree, promising to do better than her.

Mother Gothel, like all witches, has the ability of Witchcraft and has been described as "very powerful and dangerous.". She has the ability to glamour her real identity to deceive others, cast a confinement spell that prevents exiting a certain area (such as a tower) and accelerate the growth of plants. Also she is so far the only practitioner of magic to have retained her powers at Hyperion Heights, although very limited. Once the curse is broken, all of her magic returns.

Gothel is a deceitful and manipulative person with an intense hatred for humanity. She is always looking for young girls with magical powers finding their emotional weakness, and manipulate it until she has a new pawn. She is also very cruel, demonstrated by her willingness to abandon her newborn daughter to starve to death. She calls herself "mother" because she claims she tends to people's needs like a mother would do. Gothel is controlling, deceitful, evil, manipulative, and murderous. In the distant past Gothel was simply one of many nymphs in the grove, she was as sweet, kind, and nurturing as she could be. 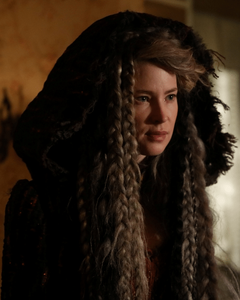 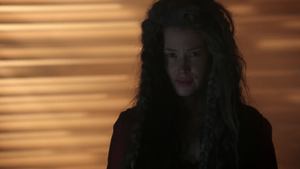