To get children to love her by any means necessary (failed).

Mother Mae-Eye is a villain who first appeared in the episode of the same name of the Teen Titans animated series that aired on Cartoon Network based on the DC Teen Titans comics. She is an evil witch and "love vampire" as she is called on the Teen Titans Season Four DVD "Know Your Foes" feature. Mother Mae-Eye is a powerful spellcaster who used a magic wooden spoon to conjure mind controlling pies called "love pies", she used these pies to brainwash her victims into her "children" whom she kept to herself to grow off of their love.

She was voiced by the late Billy Hayes.

Mother first appears sealed in a love pie at a gypsy's magic store called "mystical items at reasonable prices", Cyborg entered the store, and, after being given the choices of either buying the pie, a monkey's palm, (a reference to fairy tales where a monkey's palm can be used to grant wishes with bad side effects) and a brain in a jar, bought the pie. Cyborg took the pie back to Titan Tower, where, after the titans each ate a piece of it and fell under her spell, she was released and began feeding them more and more pies to feed off of their love for her. Once her victims start to eat her pie they see her as a tubby rose-cheeked red and white dressed blue-eyed woman with a very sweet and sugary voice, instead of her true fat ugly green skinned grey haired three eyed wart nosed haggish witch form. Starfire suffers a head trauma that snaps her out of the spell and she sees her true form. Mother Mae-Eye turns the Titans Tower into a gingerbread themed house with rainbows and cute animals. She tucks them into a pie in an oven as well as bake them alive. Starfire attacks the witch and Mother Mae-Eye punishes her by feeding her more pies. Starfire frees the other titans from the spell as well. The Teen Titans than defeated the evil witch and her mass-produced gingerbread man army and trapping her back into the pie. Knowing that eating the pie frees her, the Titans leave the pie at the base of the H.I.V.E Five who eat the pie and free her. They subsequently fall under her spell too,

In the short special "Mayhem at First Sight" she and Mumbo Jumbo fight the Titans together and fall in love, so they have a wedding party with other villains as guests. The Titans get placed inside a giant wedding cake, but Raven can free Robin. Before Mumbo can say "Yes" to the question if he wants to marry Mae-Eye, he and she get knocked out by Robin, destroying the illusions. 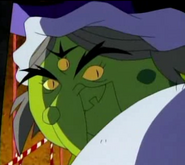