To make her customers eat her pies

Cannibal
Traitor
Hypnotist
On & Off

Mother Mae-Eye is a major recurring antagonist from Teen Titans Go!. She is an evil old lady, who runs a pie restaurant. She hypnotizes her own employees and bakes them into pies, which she later serves to unsuspecting customers.

She was voiced by the late Billie Hayes.

Mother Mae-Eye debuted in "Pie-Bros", where she ran her pie store, while the Teen Titans ate there. At first, there was no ill tension going on between the two, because Mother Mae-Eye was behaving and just working at her restaurant. Unbeknownst to them, Mother Mae-Eye was cooking up trouble, by hypnotizing her employees and bringing them back into the kitchen, where she would later cook them into pies.

Later in the episode, Beast Boy got hired to work at her restaurant, so he could make money to buy Cyborg a birthday present.

At the end of the episode, Cyborg celebrated his birthday at Mother Mae-Eye's pie store and he and Beast Boy got into a huge fight. Cyborg was mad that Beast Boy was working during his party and Beast Boy was mad that Cyborg didn't understand he was trying to make money to buy him a present. Meanwhile, Mother Mae-Eye hypnotized Robin, Starfire, and Raven to come to the kitchen with her. Cyborg and Beast Boy didn't even notice. Cyborg and Beast Boy eventually resolved their argument, when Beast Boy showed Cyborg his real present, which was a drawing that came from the heart. The two reconciled and ate some newly made pies, which resembled their fellow Titans. Robin, Starfire, and Raven showed up later, completely butt naked and partially balding, next to Mother Mae-Eye, who was tied up in ropes and beaten, implying that Mother May-Eye was only able to cook their clothes and hair before the Titans beat her up and stopped her evil deeds.

Mother Mae-Eye would return in "Grandma Voice", where she fought with the Teen Titans. Mother Mae-Eye would use grandmother-themed weapons and attacks on them and act as though she was punishing her kids, who misbehaved, making comments like "That's what happens to naughty kids!" and "Mother told you to be nice! Now you all get a spanking!" Robin said that she was a really tough grandma, but Cyborg disagreed, saying that his own grandma was way worse. He then did an imitation of her, which all the Titans laughed at. Cyborg would tell them about how his grandmother would "smack some sense into you" if you misbehaved and demonstrated this on Mother Mae-Eye, which led to the latter's defeat.

The Teen Titans became sick of listening to Cyborg's grandma voice, so they needed a plan to knock some sense back into him. They got Mother Mae-Eye to kidnap them and attempt to cook them into a pie so that Cyborg would come and fight her. During their grandma-themed fight, Mother Mae-Eye knocked some sense into Cyborg, setting him back to normal. After doing this, Mother Mae-Eye attempted to escape on her flying propellor spoon, before Cyborg blasted her to death with his missile launcher and saved his friends.

Mother Mae-Eye made a cameo during a montage in "The Streak", robbing a truck full of money before the Titans busted in and beat her up. This was done as part of their beating-up-villains streak.

Mother Mae-Eye is a short little old lady, who wears a big red mushroom-shaped hat with light pink spots on it. The biggest and foremost spot on her hat can transform into a giant yellow eye, with a spindly, snake-like pupil in the center. She can use this eye to hypnotize people. She also has a white bow, tied around her mushroom hat. She has white hair, pink blush, and yellow eyes. She also wears a red dress with a white collar and a black button in the middle of the collar. She wears a white apron with a red picture of an eye on it with three eyelashes on the top and three eyelashes on the bottom of it and lastly, she wears black shoes.

When she's not being evil, Mother Mae-Eye is just a sweet old lady, who runs a pie store and bakes pies for her customers. However, further investigation will show that behind this peaceful facade, she's not all sunshine and lollipops. She is actually a cruel and sinister mistress who hires people to work at her pie store only to hypnotize them into coming back into the kitchen with her so that she can cook them into pies. She then feeds said pies to her unsuspecting customers, possibly because of some cruel and unusual fetish.

Mother Mae-Eye has on occasion, acted as though she was the mother of The Teen Titans. It is unknown if this is a sarcastic way of patronizing them or if she's actually delusional enough, that she feels the need to act like an abusive maternal figure to the people she despises. Either way, she mistreats and tortures The Titans for fun and has also tried to cook them into pies to kill them, and when The Titans fight back, she acts as though her "children" are misbehaving and she either spanks them or knocks some sense into them, during their battles. 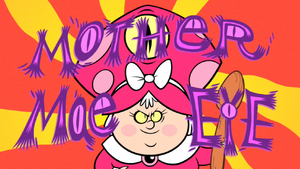 Mother Mae-Eye gets a proper introduction. 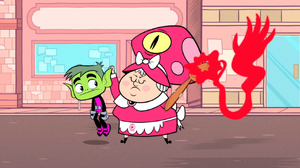 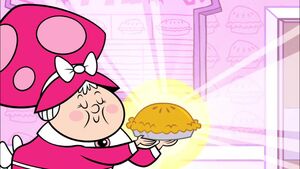 When she's not being evil, Mother Mae-Eye works at a pie store, making delicious pies for everyone. 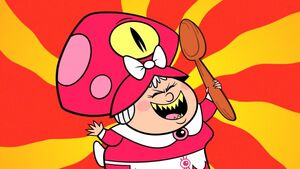