Feeding on the psychic energy produced by their victims' interaction through "dreams".

Latching onto hosts and put them in such euphoric state.

Alleviate the pain and suffering felt by the sick or by the dying.

Keep their victims trapped in a dream-like state while feeding off their life force until they eventually expire.

Matris Ater Clementia, also known as Mother Mercy, is an alien life-form that is the creator of the Black Mercy plants.

Used by Mongul, and the new Green Lantern for sector 2261. She initially created them to find people who are suffering and dying to ease their pain, which created a symbiotic relationship with her However, the first Mongul discovered the plants and used them to spread his evil, even mutating some of the Black Mercys into giving their victims suffering. However, Mother Mercy kept her sentience hidden from Mongul.

Her abilities to both ease and create fear gave her both a Green Lantern Corps ring and a Sinestro Corps ring to choose from. The Green Lantern ring, which she ultimately chose, came from the recently deceased Bzzd.

Since ancient times, there has been a Mother Mercy on the Black Mercy Planet. Matris is the first birth of mercy, as such she is the planet and the planet is her, they are both one in the same being. Eons ago, Matris was a creature living under the waves providing sustenance to all the wildlife there, she is shown as a spore-like being connected by many plant-like roots and tendrils to the environment.

At an unspecified point in time, an alien vessel crashed into the waters of her world and the alien escaped his sinking ship to the shoreline, but mortally wounded. Matris sensed his arrival and his pain via her telepathy, and removed herself from the planet's core. It is in this encounter that she found out she was capable of tapping into the aliens center of thought and transmit its personal images of desire and joy so the creature could visualize them within his subconscious. In turn the aliens body released a constant stream of chemicals, neuro-dampeners, that influenced his perception of pain. Realizing what this meant, Matris knew that she has the ability to induce a state of pure bliss upon other living beings.

When the aliens body finally died, Matris detached herself from him and found that she could hear the cries of pain from the entire galaxy. She has become an empath on a galactic scale, and upon the realization of her possible role in the universe she planted herself in the ground and began her destiny to ease the pain and suffering of others. She then created a race of empathic children that she hoped would one day be discovered on the surface of the Black Mercy Planet and then spread through the galaxy to help ease the pain of millions. Her dream was they would bring peace of mind to the sick and dying.

Upon maturity she would send them among the stars on their mission, but she forgot one part of her plan, with raising a family of millions how would she feed them. It is not until after a long struggle to determine how to fix this problem, she realised that she, as literally a part of the planet, she could manipulate its gravity, and bring food down to the surface herself. She sent a call to the remnants of organic matter to feed her children which caused a cloud of dead bodies to accumulate around the planet.

Some time afterwards, Mongul I arrived on the planet, at the time Matris decided against revealing her sentient nature as to go along her mission required that no one knows of her existence. Because of this she would allow Mongul from time to time to come and take some of her children so as not to disrupt all she was trying to achieve. Until he stopped coming all together, then his son came with the Qwardian Power Ring and used its powers to transform her children from dreamweavers to fearmongers. When a contingent of Green Lantern Corps members came to the Black Mercy Planet in search of Arisia and Sodam Yat, two Lanterns who had been kidnapped and brought to the Black Mercy Planet and forced to experience the full horror of the manipulated Mercy plants, they were caught in a fight with Mercy who attempted to stop them burning her children.

Upon being injured by Sodam Yat, she began to telepathically grieve and sob for her children, prompting Soranik Natu and Kyle Rayner to stop their fellow Lanterns killing her. Once she explained everything of her origins however, Mongul attacked them from behind. He then threatened Mercy with her and her children's destruction if she didn't devour the Green Lantern bodies. Ignoring his threat,she freed them and Mongul was defeated in the ensuing battle, her using her gravity manipulation to pull him down into a pit of her children when the Lanterns defeated him.

It was upon the death of a Sinestro Corps member and Bzzd, the Qwardian Power Ring and the Green Lantern Power Rings respectively tried to recruit Matris, as she had both the ability to overcome great fear and the ability to instill great fear. She in turn chose to follow the path of a green lantern and blasted off the vine holding the Qwardian power ring. The lanterns welcome her to the corps and she in turn tells the lanterns she was sorry for their loss, and relayed they should not concern themselves with mongul anymore as the pieces of his body were being digested to feed her children. 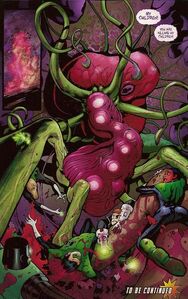