Administrator of a children's orphanage

Mother Superior is a major antagonist of Silent Night, Deadly Night. She is a sadistic and abusive head nun at an orphanage who is obsessed with divine punishment. She believes a firm hand and physical abuse can solve all problems with children, which creating two serial killers in adulthood. She also appears in the sequel Silent Night, Deadly Night Part 2 once again as a major antagonist.

When young Billy Chapman is sent to his room as punishment for drawing a violent picture of Santa and his reindeer getting killed in class, Sister Margret, one of the nuns under Mother Superior's authority, tries to defend Billy, saying that his behavior is a result of his parent's murder around Christmas time by a man dressed as Santa Claus. Mother Superior ridicules her and says that she will take care of Billy's problem behavior.

Mother Superior is retired now and has suffered a stroke. She lives in a house all alone. Christmas Eve night, Billy's brother, Ricky, comes to kill Mother Superior and exact revenge on her for his brother. After a long chase, Mother Superior tries to talk Ricky down with firm words. However, Ricky ignores her words and cuts off her head. In the end, Mother Superior dies by the hands of the very monster she created. 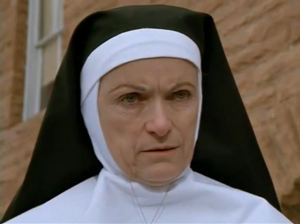