Clan Mother and Leader of the Nightsisters

Great Mother of the Frangawl Cult

Preserve the culture of the Nightsisters (somewhat succeeded).

Retrieve her long lost son Maul (succeeded).
Seek revenge against Darth Sidious and the Sith for their betrayal (failed).

Mother Talzin is a neutral character who sometimes acts as an antagonist in the 2008-2020 animated TV series Star Wars The Clone Wars. She is the manipulative leader of the Dathomirian Nightsisters and the Frangawl Cult and the mother of Darth Maul and Savage Opress.

She was voiced by Barbara Goodson who also voiced Rita Repulsa in Mighty Morphin Power Rangers.

Mother Talzin was a manipulative witch who showed different aspects of her personality depending on who she interacted with. As the Shaman of the Dathomir Witches, Talzin taught them to be loyal to no one but themselves and their sisters and, as their leader, they obeyed her without question. Acting as a mother figure she was very sympathetic with Asajj Ventress aiding her and giving her hugs. Although showing she had a compassionate side, Mother Talzin was quite deceitful, lying to Ventress to further her own goals by helping Savage Opress after he betrayed her and sending him on a quest to find his brother. Ultimately, Talzin's greatest attachment was to her "beloved son" Maul. She loved him very deeply and ultimately sacrificed herself to save him from Emperor Palpatine and his minions.

She acted boldly when the Confederacy invaded her home and fought for her clan, but when she saw the massacre was wiping out the witches she fled. Talzin is also sexist, who believed females were dominant and the men, the Nightbrothers, were below them. She also displayed a snarky and dismissive side when confronted by Mace Windu, sarcastically telling him that she was a "simple witch" and beneath his attention. In her lust for power she was also willing to sacrifice innocent Bardottans including Queen Julia, in order to enhance her own powers and regain her corporeal form. Above anything and anyone else, Talzin longed to be the most powerful being in the galaxy.

Mother Talzin was a dark and powerful witch and mistress of the dark magic able to wield spirit ichor that flowed from the depths of Dathomir. She had a strong different connection to the dark side of the Force. Talzin employed supernatural tactics to advance her shrewd plans and wields enormous dark powers. Shaping green mystical energy into weapons, and at one point later bring her son Darth Maul back from the edge of madness. As Clan Mother she led the Nightsisters when they cast incantations when they transformed Savage Opress and made Ventress into a Nightsister and the spell that disguised the Sisters and Ventress invisible. She had mind power as well being able to put someone to sleep with the touch of her finger. She could do divination able to locate anyone by looking into her crystal ball. Talzin could do voodoo using her powers to torture Count Dooku on a far away planet. Talzin displayed the ability to dematerialize her body, transforming into smoke and appearing from wisps of green mist before Savage when he returned.

Using her magic, she was able to repair Darth Maul's damaged mind and created a fully functional set of new legs formed from scattered droids. When fighting Talzin could create a protective bubble and launched green Force lightning while holding the shield. She could produce her own version of a lightsaber from magick and spirit ichor and held her own against both Mace Windu and Darth Sidious, showcasing that she is a skilled duelist, though she is not trained like one. Mother Talzin could use telekinesis able to lift objects such as her crystal ball and levitate herself. She could create items and incinerate them such as the silver orb and set things on fire as shown with the cauldron that contained the voodoo doll and conjured a drinking cup of black root for Dooku when he visited.

Talzin's magic was the mightiest when she remained on Dathomir but when she went off world she could vanish and appear into the spirit realm just by walking such as she did when she traveled to Zardossa Stix. Talzin for a time survived without a body. In the Nightbrother village in a secret lair stood a single stone column which was said to be the heart of her power. It was there that her spirit possessed Dooku, draining his life energy to regain her lost bodily form, but upon the stone's destruction she died.

Mother Talzin's speech was both deep and eerie backed by an otherworldy echo. She spoke spells and other manipulative sentences to gain her way. 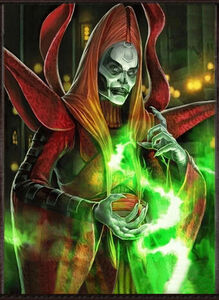 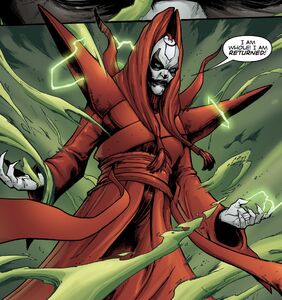 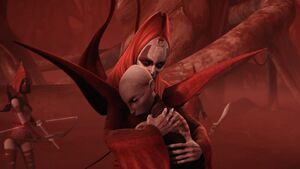 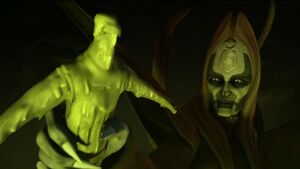 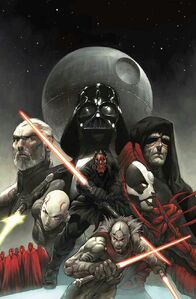