Hitler with a Tail
The Omen with Whiskers

Defend his territory from the Smuntz brothers (formerly).

The Mouse is the main antagonist of the 1997 DreamWorks film Mouse Hunt.

He is a small mouse that the Smuntz brothers, the movie's protagonists, try to get out of a mansion they wish to sell. Though harmless he looks, as the movie progresses, the mouse shows more and more wit and dexterity, outsmarting all the traps the brothers set. It is interesting to note that the audience can either side with the brothers, who need the house sold to get out of a precarious situation, or with the mouse that is merely defending himself and his territory from many attempts to kill him.

Lars and Ernie Shmuntz inherit an old mansion after their father's death and discover it is worth a great deal of money, being the last creation of a famous artist. They started renovating the place, which is already inhabited by a tiny little mouse. Having lost his job at a restaurant because of a cockroach, Ernie makes a priority to get rid of the parasite.

The Mouse, however, is incredibly intelligent and cunning, making all the brothers' attempts to kill it backfire at them, in a Tom & Jerry-like fight. From putting mousetraps to shooting with a rifle, from buying a monstrous cat (trapped in a dumbwaiter) to hiring an eccentric exterminator (tortured and yanked out of the mansion by his own equipment), the brothers and their allies are always the only ones injured, the Mouse taking advantage of his small size and knowledge of the house to sabotage their efforts. The battle gets more and more aggressive along the film, and the mansion gets more and more devastated as a result.

The brothers manage (accidentally) to knock the mouse unconscious, but in a comical change of heart, cannot bring themselves to kill him. They put him instead in a box that they mail to Fidel Castro. However, the box is sent back due to insufficient postage. After an ultimate chase, the Mouse is seemingly killed, but the mansion falls in pieces. The brothers are left homeless and penniless and go to a string factory they also inherited from their father.

The Mouse survived, however, and follows them. Having no home either and sees the brothers are in vein, it decides to pacify with them by making the factory produce string ball-shaped cheese, which becomes a success. The brothers and the Mouse become partners. 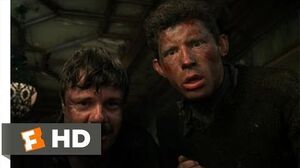 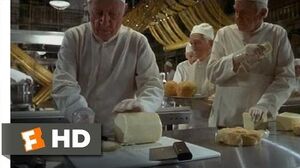