Magic (in some versions)

Turn the prince into a nutcracker to take over his kingdom.

Anthropomorphic Monarch
The Mouse King (also known as the Rat King in some versions) is the main antagonist in the novel and ballet adaptation The Nutcracker. He is an oppressive ruler who wishes to rule over a magical kingdom where he comes from. He becomes successful as he transformed the prince into a nutcracker and overthrew him. The prince, however, still rebels against the Mouse King, as the story introduces the Mouse King and the Nutcracker Prince waging in a battle against each other, which soon brought the attention of the story's protagonist.

On Christmas Eve, a girl named Marie is visited by her godfather Drosselmeyer who persent Marie a nutcracker as her present. Marie enjoys the gift, but then her brother Fritz accidentally broke it when he wanted to play with it. Marie becomse upset and takes the nutcracker away from Fritz, as she promises to take care of it.

Marie's slumber is disrupted by the grandfather clock chimeing, and Marie belives Drosselmeyer is sitting on top of it. Around that time, the Mouse King and his army invades Marie's house. The Nutcracker soon comes alive and leads an army of toys into battle against the Mouse King. The battle is first in favor of the dolls, but they are soon overwhelmed by the Mouse KIng's army. Noticing the Nutcracker about to be taken captive, Marie throws a slipper at the Mouse King, fainting afterwards (cutting her arm on the toy cabinet's glass door in the process).

Marie wakes up in her bed the next morning with her arm bandaged. She tries to tell her parents about the battle between the mice and the dolls, but they don't believe her, thinking that she has had a fever dream caused by the cut from the glass. Several days later, Drosselmeyer arrives with the nutcracker after he fixed his jaw, and he tells Marie the story of Princess Pirlipat and Madame Mouserinks, also known as the Queen of the Mice, which explains how nutcrackers came to be and why they look the way they do.

The Mouse Queen tricked Pirlipat's mother into allowing her and her children to gobble up some lard..... that was supposed to be used in the King's sausage dinner! The King, furious about the now ruined dinner plans, had his court inventor, whose name happens to be Drosselmeyer, create traps for the Mouse Queen and her children.

The Mouse Queen, angered at the death of her children, swore that she would take revenge on Pirlipat. Pirlipat's mother surrounded her with cats which were supposed to be kept awake by being constantly stroked. However, the nurses who did so fell asleep and the Mouse Queen magically turned Pirlipat ugly (With a large head, a wide grinning mouth, and a cottony beard like a nutcracker.) The King blamed Drosselmeyer and gave him four weeks to find a cure. At the end, he had no cure, but went to the court astrologer.

They read Pirlipat's horoscope and told the King that the only way to cure her was to have her eat the nut Crackatook (Krakatuk). The nut had to be cracked and handed to her by a man who had never been shaved nor worn boots since birth, and who must, without opening his eyes, hand her the kernel and then take seven steps backwards without stumbling. The King sent Drosselmeyer and the astrologer out to look for both, charging them on pain of death not to return until they had found them.

The two men journeyed for many years, with no luck finding either until finally they returned home to Nuremberg and found the nut in the possession of Drosselmeyer's cousin, a puppet-maker. Luckily, the son turned out to be the young man needed to crack the nut Crackatook. After the nut was found, The King promised Pirlipat's hand to whoever could crack it. Many men broke their teeth on it before Drosselmeyer's nephew finally appeared.

He cracked it easily and handed it to Pirlipat, who swallowed it and immediately became beautiful again. However, after Drosselmeyer's nephew's seventh backward step, he stepped and tripped on the Mouse Queen, so the curse fell on him. (Giving him the same large head, wide grinning mouth, and cottony beard as her, affectively making him a nutcracker.) The ungrateful and unsympathetic Pirlipat, seeing how ugly he had become, refused to marry him and banished him from the castle.

Marie, while she recovers from her wound, hears the Mouse King (who is the son of the dead Madame Mouserinks), whispering to her in the middle of the night, threatening to bite the nutcracker to bits unless she gives him the sweets and dolls she got. For the nutcracker's sake, she sacrifices them, but the greedy rodent wants more and more until finally the Nutcracker tells her that if she will just get him a sword, he will end The Mouse King right then and there. She asks Fritz for one, and he gives her one from his toy hussars. The next night, the nutcracker comes into Marie's room bearing the Mouse King's seven crowns, hinting that he killed the Mouse King.

The Mouse King appears in Act 1 of the famous play. The beginning is mostly the same, with Marie receiving the Nutcracker, and Fritz damaging it's jaw.

During the night, after everyone else has gone to bed, Clara returns to the parlor to check on her beloved nutcracker. As she reaches the Nutcracker's bed, the clock strikes midnight, and she looks up to see Drosselmeyer, perched atop it! Out of nowhere, mice begin to fill the room and the Christmas Tree grows to a huge height. The Nutcracker also grows to life size, and before she knows it, Clara finds herself in the midst of a battle between an army of gingerbread soldiers and the mice, led by their king!

The Mice begin to attack and feast on the crunchy cavalry, with the Nutcracker leading the soldiers, who are joined by tin soldiers and dolls, the latter serving as doctors to carry away the wounded. As the Mouse King advances on the still-wounded nutcracker, Clara throws her slipper at him, distracting him long enough for the nutcracker to stab him. The Mouse King falls over dead, while his infantry retreats.

Barbie in the Nutcracker

Main article: King of the Cats

The Nutcracker in 3D

Nutcracker and the Four Realms 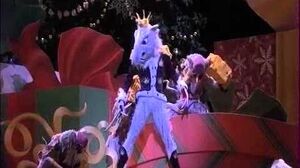