Crown Prince (before he became a king)

To take revenge to Nutcracker for the death of his mother

A long time ago, there was a party at a royal castle to celebrate the prince's birthday, which was interrupted by the arrival of the three-headed Mouse Queen and her spoiled brat son, who both behaved very rudely and refused to leave or improve their manners. In exasperation, the king entered a chamber to obtain a poison against the mouse queen, but was locked in by the mouse prince. The mouse prince then started harassing the queen and the baby prince, and when the prince hit the mouse prince, its tail got stuck under the cradle and was hurt. In retaliation, the vengeful Mouse Queen had cursed the baby prince, turning him into a nutcracker, just before she was vanquished by the king. The king and queen were devastated, and the entire hall was petrified while the mouse prince escapes, taking his mother's crown with him. As he is now crowned as the Mouse King, he declares revenge on the Nutcracker. Eventually, the nutcracker came to be hanged as an ornament on the Christmas tree within this house.

After the nutcracker has finished his story about his past to a girl who found him, mice soldiers began to appear in the hall, followed by Mouse King. The soldiers tried to get the nutcracker, but the girl stopped them, leading the mouse king to use his magic crown to shrink and capture her. The nutcracker started to bring the toys around the Christmas tree to life, and use their help in the war between them and mice. At first, nutcracker managed to save a girl, but victory was not for long. Mouse King banged his staff against the ground, which managed to return all toys back on the Christmas tree and fix up his army. The nutcracker is captured, bound and about to be whipped to pieces by the Mouse King. A girl couldn't see it, so she throwed her wooden clog at him, knocking off and smashing the iron crown, the source of the mouse king's powers and his life. The mouse king's magic backfires, making him vanish in a puff of green smoke which also decimated his army the moment they inhaled it and started to sneeze to death. 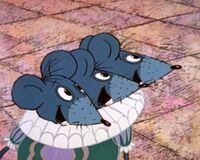 Mouse King, as he was young.
Add a photo to this gallery 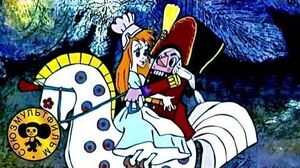 Новогодние мультфильмы - Щелкунчик
Add a photo to this gallery
Retrieved from "https://villains.fandom.com/wiki/Mouse_King_(The_Nutcracker_1973)?oldid=2107144"
Community content is available under CC-BY-SA unless otherwise noted.