Mother
Mumsy (both by her son)

Take revenge on Hans for breaking her curse (succeeded).

The Mouse Queen is the posthumous overarching antagonist in the 1990 Canadian animated holiday film The Nutcracker Prince. She was the mother of the Mouse King and the one responsible for cursing the Nutcracker.

She was voiced by the late Phyllis Diller, who also voiced Mask Scara in The Powerpuff Girls.

The Mouse Queen appeared as a small, elderly, female anthropomorphic mouse with red lipstick and green eyeliner. She wore royal gloves, a robe and a crown which was inherited by her son upon her death.

The Mouse Queen hated humans, having no qualms with stealing from them or putting curses on them, and was also abusive towards her own son, who she believed to be stupid for believing in brute force and doubting her mystic abilities. However, she did care for her subjects, as she shared her feasts with them and swore revenge when they were captured.

As queen of all mice, she had complete authority over her subjects. She was also skilled in magic, as she inflicted curses that turned people hideous or into inanimate objects.

The Mouse Queen lived long ago in Germany, living in the castle that housed the country's royal family, alongside her brutish son and their army of mice. One day, on the human king's birthday, the human queen was making a large cake made of blue cheese for her husband. But then the Mouse Queen appeared along with the rest of her clan, devouring most of the cake. When the king found out, he became furious and ordered the Mouse Queen's death, but when the human queen pointed out that she had to be caught first, he then ordered his royal clock-maker and magician, Elias Christian Drosselmeier and his nephew, Hans to do something about it. Thus, Drosselmeier invented dozens of mouse traps. As a result, all of the mice in the castle were captured save for The Mouse Queen herself and her son, who swore revenge for this. The Mouse Queen's son wanted to fight them head-on, but the queen hushed him, as she had another idea.

That night, the queen and her son infiltrate Princess Pirlipat's chambers while she slept, managing to sneak past the chambermaid and her cat, who were also sleeping. As her son watched, the queen climbed the princess's bed and approached her foot. She then chanted a curse and bit Pirlipat, turning her ugly, then escaped with her son before that cat could catch them. Blaming Drosselmeier's failure to catch the Mouse Queen for her daughter's condition, the king ordered him to be beheaded, but the human queen convinced him to give Drosselmeier enough time to find a cure. After much research, and after seeing how the princess loved nuts, Drosselmeier found that the curse can be broken by eating the mystical Krakatuth Nut, which had to be cracked open first by a young man's teeth. And so, the king ordered that any nobleman who can crack the nut will marry his daughter and become prince of the kingdom.

Noblemen came from across the kingdom to try their luck in cracking the Krakatuth Nut and win the princess's hand in marriage, only for most of them to end up breaking their own teeth while the others ran away. The Mouse Queen and her son were present and secretly watched. The queen laughed as many of them failed, while the prince voiced his low opinion of his mother constantly relying on magic. When the last one left without success, Mouse Queen gloats while also abusing her son for ridiculing her earlier. Desperate to save his uncle, however, Hans breaks the nut successfully and feeds it to the princess, curing her curse, much to the Mouse Queen's dismay. Her son gloats about how he was right, but the queen states that she wasn't finished yet.

She then approaches Hans while casting another curse. Drosselmeier sees her and attempts to warn his nephew, but is too late as she bites him on the heel, transforming him into a inanimate nutcracker doll. Just before being transformed, however, Hans falls and unintentionally knocks over a column holding a bust, causing a domino effect on other columns that the Mouse Queen and her son run away from. As the final column falls over, the queen's son's tail gets caught under it, causing it to become permanently injured. Upset by this, he blames his mother for causing the incident, but is then shocked and saddened to see her lifeless body crushed beneath the column as well. He then briefly mourns for her, but then laughs as he takes the crown for himself and christens himself as the new Mouse King. He rejoices at his new position and once again mocks her for her reliance on magic, which led to her own demise.

Though the Mouse Queen was dead, the effects of her spell on Hans did not lift. Drosselmeier mourns for his nephew, but the ungrateful princess and king show their disgust to Han's new appearance and banish both him and his uncle from their kingdom forever, and then leave to celebrate the princess's returned beauty. Drosselmeier vows to restore his nephew, but the new Mouse King swears revenge on him for crushing his tail, swearing that he will build a mighty army and then return one day to destroy Hans. 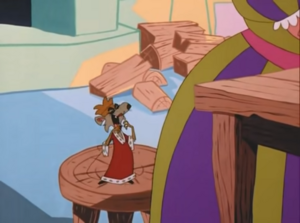 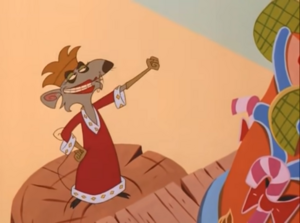 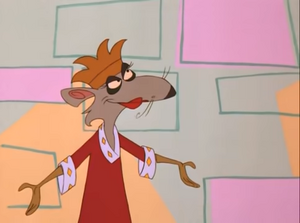 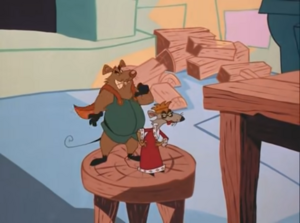 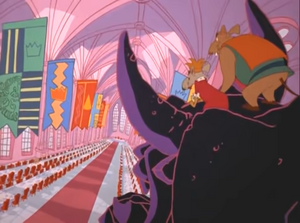 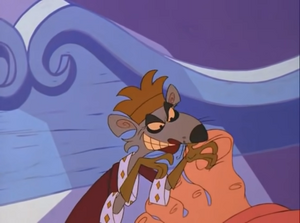 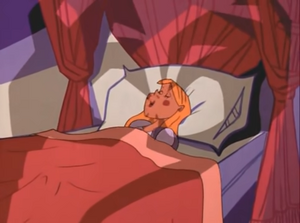 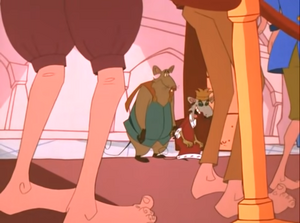 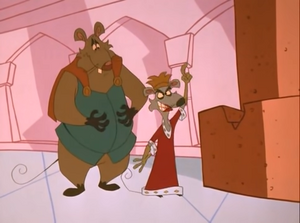 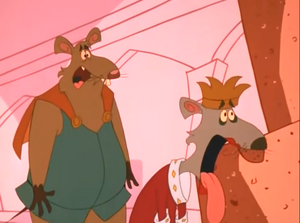