Member of the 8 Bit Club

Defeat Mario and his allies (failed).

Mouser is the secondary antagonist of Super Mario Bros. 2 and Super Mario Advance. He is one of Wart's generals and a recurring boss in both games.

Mouser made his debut in Yume Kōjō: Doki Doki Panic. Mouser helped his king, Wart, to invade the secret world of a storybook with their bombs. He is fought three times in the game in World 1-3, World 3-3 and World 5-3, with a powerful white Mouser exclusively appearing in the latter level.

In Super Mario Bros. 2, Mouser appears twice: once in World 1-3 and the other in World 3-3. The fight in World 5-3 of Yume Kōjō: Doki Doki Panic was deemed too difficult, and was replaced by Clawgrip. In battle, Mouser throws bombs at the player, which will explode after a short amount of time. In order to injure Mouser, players need to grab one of these bombs and throw them back at him so that it explodes near the rat; doing this several times will defeat him. Both Mouser fights give him a slightly different color each time, and the second fight takes more hits than the first. In Super Mario Advance, a new boss, Robirdo, took his place in the third world and Mouser replaced Tryclyde as the boss of World 6. Tryclyde remained the boss of World 2.

In BS Super Mario USA, Mouser, Birdo and Wart have returned to Subcon to invade it again. Mouser is found in World 1-3 as the main boss of the world. He is no different than in the original game. However, like Wart and Birdos, he could cast his own magic spell; such as turning enemies and objects into bombs, throwing giant bombs out of nowhere.

In The Super Mario Bros. Super Show!, Mouser appears as a member of the Koopa Pack and as the second-in-command of King Koopa.

In Nintendo Comics System, Mouser is said to have been the leader of similar looking rats called Mice, before defecting to King Koopa.

A Mouser in the Houser

In the Nintendo Comics System issue "A Mouser in the Houser", it is revealed that the Mice once had a prosperous society, having dug the Transport Tube system and hidden all the treasures they found in it. Eventually, the society of the Mice began to crumble when their king, Mouser, abandoned them and joined the forces of King Bowser Koopa.

In the aforementioned comic "A Mouser in the Houser", several Mice abduct Princess Toadstool after she becomes lost in the Transport Tube system. After kidnapping the princess, the Mice reveal their origin to her and offer her the position of their queen, saying that if she agreed to this proposal, she could have a map of the Transport Tube system, as well as dozens of ready troops to help her defeat Bowser. Princess Toadstool eventually rejects the offer of becoming queen of the Mice when they refuse to help her aid Mario, who was being attacked by Mouser.

Though several Mice appear on the alternate cover of another Nintendo Comics System comic entitled "Bedtime for Drain-Head", no Mice actually appear in the story.

Mouser makes an appearance as a sticker in Super Smash Bros. Brawl that increases arm attacks for any character, and as a grab-type primary spirit in Super Smash Bros. Ultimate. His spirit battle is against Pikachu on the Battlefield form of the Mushroom Kingdom II stage where only Bob-ombs spawn.

Mouser is a large, humanoid mouse who wears sunglasses, gloves, and boots. He is a resident of Subcon, the land of dreams. Not much is revealed about Mouser, though it is mentioned that he is prideful and utilizes his bombs to destroy good dreams. He is not to be confused with the Little Mousers, which what seem to be small versions of Mouser, but derived from their Japanese name, are completely different. 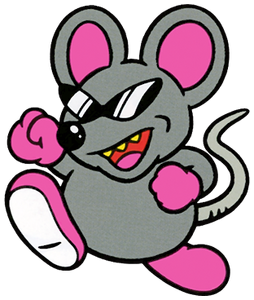 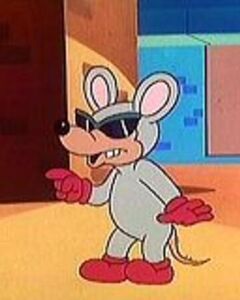 Mouser as he appears in The Super Mario Bros. Super Show!.