Lieutenant of Mordor
Messenger of the Dark Lord

Carry out Sauron's messages (both failed).

The Mouth of Sauron, or the Black Lieutenant, is a minor antagonist in the high fantasy novel The Lord of the Rings and in the Special Extended Edition of The Lord of the Rings: The Return of the King; he does not appear in the theatrical version of the film. He is the messenger of Sauron, and was one of the Black Númenóreans, and led Sauron's forces during the Third War. When Gandalf and Aragorn went to the Black Gate, the Mouth of Sauron gloated that they should surrender.

In Peter Jackson's film trilogy, he was portrayed by Bruce Spence and voiced by the late Alan Howard.

Rankin/Bass's Return of the King

Known as the "Voice of Sauron" in Rankin/Bass's 1980 adaptation of Return of the King, he seems a mere flunky and flees back behind the Black Gate when his terms are rejected. Sources are unclear as to his voice actor, placing either Don "Scooby-Doo" Messick or John "Mr. Slate" Stephenson in the role. In fact, both regularly did so many roles for Rankin/Bass and Hanna-Barbera productions, records kept at that time are hard to verify, and minor roles often went wholly uncredited.

The Lord of the Rings: The Return of the King

He appears in live action in Peter Jackson's Return of the King but only in the Extended Version, and was portrayed by Bruce Spence. When the armies of Gondor and Rohan reach the Black Gate, the Fellowship ride towards the gate and it opens a little for the Black Lieutenant to come out.

He welcomes them but is rebuffed by Gandalf who orders him to have the armies of Mordor disband. The Mouth of Sauron then takes out Frodo's Mithril vest that he acquired from the orcs making the Fellowship believe that Frodo was dead. Neither the fellowship or the Lieutenant knew of Frodo's escape from Cirith Ungol and he taunted the heroes, saying that Frodo suffered greatly before dying and that he'd failed his quest to destroy the One Ring. Aragorn then rode up to him and the Lieutenant taunted him saying it must take more than Isildur's sword to become a king of Gondor. The Lieutenant is then beheaded and killed by Aragorn. Afterward, the entire orc army marches out of Mordor.

The Return of the King (video game)

The Black Lieutenant also appears as a boss in the Return of the King games for Gameboy Advance and consoles respectively. In the Gameboy game, you fight him if the player chooses Aragorn, Legolas or Gimli for the missions. His sword poisons the player if stabbed and several orcs come out of the gates and must be fought off as well. Once the Lieutenant is killed, the quest is over and the game is completed. In the video game, he is the first boss in the Black Gate mission. You can play as Aragorn, Legolas, Gimli or Gandalf and you fight him. Once he is defeated, the gate opens and several orcs march towards your area and you must fight them off.

After getting 1,000 studs (which is the only way to finish the bonus level), the level will be completed and then your reward will be the unlocking of the playable characters: Mouth of Sauron and Sauron. The Mouth of Sauron will also come out as a new lego mini-figure in the new Lego Lord of the Rings Set 79007 Battle at the Black Gate.

The Mouth of Sauron in the Special Extended Edition of The Lord of the Rings: The Return of the King.

The Mouth of Sauron confronting Gandalf. 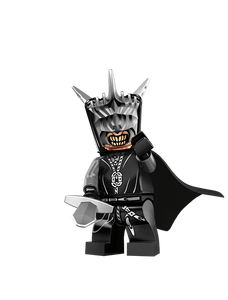 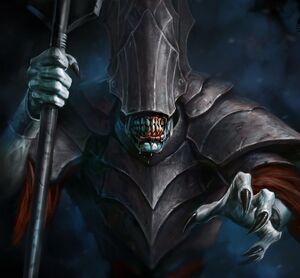 Retrieved from "https://villains.fandom.com/wiki/Mouth_of_Sauron?oldid=3811040"
Community content is available under CC-BY-SA unless otherwise noted.