The Simpsons: The Joy of Sect

Movementarian Leader (aka The Leader)

Brainwash and dominate the will of Movementarians (in this case, Springfielders) to take their money.

The Movementarians are a villainous cult that appeared in The Simpsons episode "The Joy of Sect".

They are first seen at Springfield Airport inviting people to spend a free weekend at their community compound, during which they convince them to resign their possessions and join the Movementarians to work in their community farm, all of this with the help of brainwashing films and songs, group therapy sessions (referred to as the "Circle of Judgement"), low-protein gruel, and the promise of taking them to the planet of Blisstonia in a spaceship which is kept inside of "The Forbidden Barn". The head of this organization is a mysterious man known as "The Leader", who is responsible for the spaceship and the mission involving it.

When the Simpson family moves to the Movementarian compound, Homer is the only of them convinced, but eventually the kids are converted as well. Marge bravely escapes and recruits Reverend Lovejoy, Groundskeeper Willie and Ned Flanders to help her rescue and de-programme her family. Once they are back to normal, Homer returns to the farm to show the Movementarian community there is nothing in the Forbidden Barn, but it turns out there actually is a spaceship on the inside. However, as it flies away while the Leader tells Homer that his lack of faith has doomed mankind, its outer layer falls apart, revealing a human-powered helicopter which the Leader is using to take all the money with him, but it quickly crashes down onto Cletus' house, who takes the money by threatening the Leader with a shotgun. 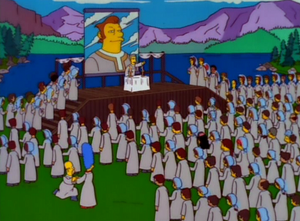 Retrieved from "https://villains.fandom.com/wiki/Movementarians?oldid=3967262"
Community content is available under CC-BY-SA unless otherwise noted.