Mother (by Eagle One)

Manipulate Cole into finding John White and the Ray Sphere.

Moya Jones is a major antagonist in the 2009 video game InFamous, and main antagonist in the InFamous comic book series issued by DC Comics. She is an DARPA agent who seeks the Ray Sphere for the government to use, and manipulates Cole to find John White and recover the sphere.

She was voiced by Kymberli Colbourne.

Not much is known about Moya's past, but she became an agent of DARPA, and according to Zeke Dunbar, was a member of the DEFENDER Program.

Before the events of the game, Moya worked with Kessler during the development of the Ray Sphere and was unaware of his true intentions. One day, Moya was with Kessler when he showed her one of his test subjects named David Warner, and was disgusted by what she saw. After the blast that caused the quarantine of Empire City, Moya decided to arrest Kessler for his crimes, but he killed the soldiers with his powers. Moya questioned Kessler, but he revealed that the Ray Sphere was with NSA agent John White. After the confrontation, Moya tried to track down John to give the Ray Sphere to the government.

After the quarantine, Moya decided to use Cole MacGrath to track down John, and pretended to be an FBI agent to convince him. In addition, Moya made a deal with Cole, telling him that he could leave Empire City if he found John. Cole agreed to the deal, and collected John's dead drops, tracking down contracts for Moya, while also dealing with the Reapers and Dust Men. After Cole learned that Moya was lying about her relationship with John and affiliation with the FBI, he ceased contacting her. When Moya realized that Cole knew the truth, she attempted to justify her actions and tried to convince Cole to help her find the Ray Sphere for the government. Later on in the game, Moya contacted Cole and told him that DARPA escalating things since she was losing control of the situation.

After Cole defeated Kessler, Moya contacted and told him that the military were clearing the streets of Empire City to prepare for a ground invasion. While the military were preparing for the invasion, her men managed to capture the conduit Alden Tate and sedated him for an autopsy. Additionally, Moya had gathered several test subjects to use against Cole as an contingency plan, and later had her men capture Sasha so they use her black tar to capture Cole. Since the Ray Sphere was apparently destroyed, Moya decided to use her resources to capture Cole to study the effects of the sphere. As Moya's troops invaded the city, she was informed that another conduit was attacking Cole and the police, and realized that David Warner survived Kessler's experiments.

While Warner attacked Cole, Moya ordered a scientist to send the test subjects into the battlefield. The scientist refused, however, stating that they would die by the time they came out of their tubes. Moya then contacted Cole and told him to leave a building that he was in with Warner, as the military were preparing to bomb it. After succeeding in bombing the building, Moya decided to have Cole capture by using Sasha's tar, and the operation was successful. Cole was taken to a military ship at a harbor, and Moya tried to convince Cole to work for the military and help replicate the Ray Sphere's effects.

When he refused, Moya threatened to plant a device into skull that would give her full control him, but the police arrive to save Cole. While dealing with the police, Moya realized that both Sasha and Cole escaped, and battled the former. Moya was nearly killed by Sasha, but military soldiers came to her rescue, and the conduit made her escape. Afterward, Moya returned to the bridge and killed the military general when he threatened to shut down her operation, and had the test subjects released to aid Cole in his battle against Warner. Once Cole defeated Warner, Moya attempted to capture him before the ship started to sink, and she was trapped inside. Though Cole attempted to save her, Moya told him to leave before he died, and drowned in the ship.

After the incident, DARPA and the military's actions were revealed to the public, and Moya took most of the fall. 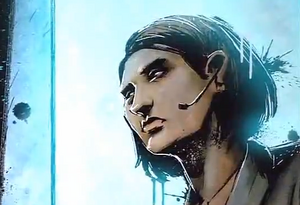 Moya in a cutscene of InFamous, meeting with Cole.

Moya's death in the comics.