Get extra money out of the children they adopt (succeeded).

John & Patricia Vale are posthumous major antagonists in Batman: The Telltale Series. They are a married couple who were the foster parents of Vicki Vale, who later revealed her true identity as Lady Arkham. It is soon revealed that they brutally abused Vicki in a hidden chamber underneath their basement. As such, they are ultimately the ones responsible for Vicki's fall into villainy.

John and Patricia Vale got married at some point and adopted Vicki Vale some time after Thomas Wayne murdered her birth parents. They then brutally abused her in a hidden chamber beneath the basement of their house, turning it into a torture chamber as they ruthlessly beat her with belts and shackles. At one point, Vicki tried to climb up the walls to escape, but was unsuccessful. After she somehow got out, the Vales adopted a boy decades later, and started abusing him too to the point where he was traumatized and bruised. It turns out that the Vales adopted these children to receive extra money via monthly stipends from Gotham Social Services.

After Vicki Vale fully adopted her Lady Arkham persona, she decided that she didn't need the Vales to hide this anymore, and returned to their house to kill them, both to gain hold of her foster father's company and to extract revenge on them for the torture they inflicted on her. Patricia tried to fight back against Vicki with a knife, but only managed to slice off part of her hair. Vicki then brutally killed her by injecting an even more potent version of her drug into her bloodstream before stabbing her eyes out. John arrived sometime after this, and Vicki took off his belt and beat him with it to the point where he was bleeding out. Following this, she hung him in the kitchen pantry with his belt, but the blood loss killed him before the hanging did.

After getting out of Arkham Asylum, Batman tracks Vicki Vale to her foster parents' home address and finds the Vales having been brutally murdered; Patricia Vale was drugged to death and had her eyes gouged out, and John Vale was beaten and hung with his own belt. While gathering evidence, Batman concludes that Lady Arkham didn't need her foster parents around to support her old identity as Vicki Vale, as well as seeing that John's company warehouse provided the perfect hiding place for her drugs.

Batman also finds a young boy, the Vales' adopted son, who hid during the attack, who, if Batman was gentle and compassionate towards the child, informs the vigilante that the attacker mentioned drugs and attacking the police. But if Batman was intimidating and stern, the boy will feel frightened towards the vigilante and become afraid of him, thus he won't tell him anything (though he will presumably tell the GCPD about what he heard following the scenario off-screen). Batman and the boy were then attacked by a drone sent by Penguin but were able to destroy it before either of them are harmed.

After Alfred was kidnapped by Lady Arkham, Batman goes back to the Vales' house and finds a secret room underneath their basement. It is revealed that Alfred managed to get into the underground chamber and leave a sign for Batman to find his (and Lady Arkham's) location. However, the chamber also revealed that Vicki Vale was abused with belts and was chained there for what could have only been days and nights. Batman concludes that Vicki is consumed by hatred and vengeance because it's all she's ever known and that Lady Arkham was born in that room from her parent's abuse.

If Batman brings up her foster parents in front of her and asks how she could've survived the torture she was forced to endure, Lady Arkham states that she only survived the abuse by thinking how she would exact revenge on them one day.

It is unknown why the Vales abused their foster children in such a horrific way, reasons range from possible insanity/mental illness or the likelihood that they were just depraved and sadistic. Regardless, they are ultimately the reason for Lady Arkham's existence. 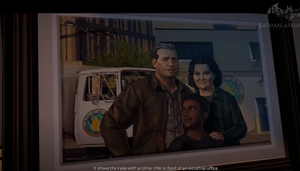 A picture of the Vales with their adopted son. 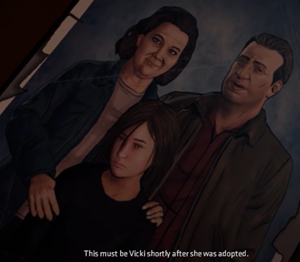 An old photograph of the Vales shortly after they adopted Vicki. 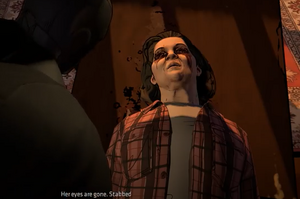 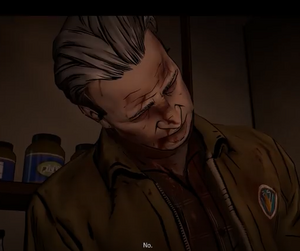 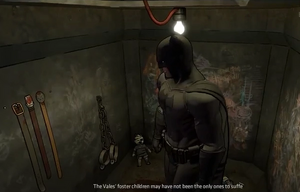 The chamber where Vicki Vale was abused.