One of Hell's Leaders

Reclaim his creation known as Black.

Murdering other drivers in Twisted Metal

Mr. Ash is an antagonist in the Twisted Metal video game series.

Mr. Ash is a dark and powerful being. Even though Mr. Ash appears to be human, he is a demon. In fact, he is one of Hell's leaders. Mr. Ash is responsible for creating powerful demons.

Minion was one of Mr. Ash's strongest demons. One day, a man named Calypso was sent to Hell after crashing into a wall. Mr. Ash pitted Minion against Calypso in a demolition derby. Calypso managed to survive and won the demolition derby. In the process, Calypso also managed to acquire Minion's ability to grant wishes.

Later, Calypso met Satan who is a big fan of demolition derbies. Satan noticed Calypso's ability to grant wishes. He offered Calypso an opportunity: collect the souls of the most skilled drivers. In return, Satan would return Calypso to Earth. Desperate to leave Hell, Calypso accepted the offer. He returned to Earth and created Twisted Metal as a way to fulfill his part of the offer.

Mr. Ash didn't know about the event or he didn't care. He wasn't even bothered about Calypso stealing Minion's ability to grant wishes.

Years later, Calypso stole Black who belonged to Mr. Ash. Black was powerful enough to destroy the entire Earth. He planned to send Black into an alternate universe and kill a darker version of himself. Before Calypso had a chance to send Black, Mr. Ash arrived after winning Twisted Metal. Despite Calypso's pleas, Mr. Ash reclaimed Black and returned to Hell. Calypso's plan was completely destroyed. Despite the loss of Black, Calypso continued to run Twisted Metal.

Mr. Ash appears in Twisted Metal III as the first boss of the game. He has no ending and he isn't a playable character. The manual states that Mr. Ash is in the contest to simply be an obstacle to other contestants. 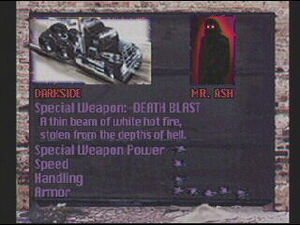 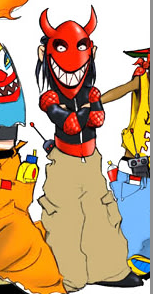 Jimmy Ash.
Add a photo to this gallery 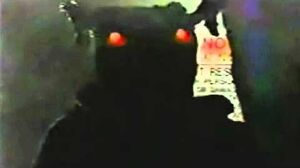 Retrieved from "https://villains.fandom.com/wiki/Mr._Ash?oldid=3890903"
Community content is available under CC-BY-SA unless otherwise noted.