Manipulating people into using up their charge cards and turning them into mannequins.

Pay off his debt to the Devil.

Keep his customers turned into mannequins forever.
Kill Jughead for refusing to buy his products (all failed).

He is a businessman and the general manager of Mallhalla, which he uses to lure teens in so that he can use them to pay his debt to The Devil. He is also the archenemy of Jughead Jones.

He was voiced by Brian Blessed, who also played Cecil Clayton in Tarzan, El Supremo in Freddie as F.R.O.7., and the Nekross King in Wizards vs Aliens.

At first, Mr. Avericci appeared to be an affable businessman who was willing to help his clients find what they were looking for to shop and buy. However, in reality, he is a selfish man who would do anything to satisfy his greed. It was also indicated that he was willing to renounce his humanity by selling his soul to the Devil to satisfy more of his greed and collect the souls of missing teens to pay off his debt, as his true form was that of a demonic creature.

Aside from wishing to repay the Devil so that he would not have his soul taken by him, it is also indicated that he had a fondness for mannequins, as he would transform his victims into them prior to giving their souls to his employer.

Starting off as a normal human being, Avericci grew to become a greedy shopaholic, later describing himself as the "most selfish shopaholic that ever lived". When he ran out of money, he sold his soul to the Devil (implied) for more, eventually becoming a demon himself. As part of the deal, Avericci was tasked to open and run a new business mall called Mallhalla in Riverdale in order to lure greedy teens so that he can turn them into mannequins in order to collect their souls and pay off his debt.

Avericci first appeared greeting Archie Andrews and his friends when they arrived to Mallhalla. Giving out special charge cards as they are short on money, he encouraged the kids to use their cards to buy the mall's products. Due to the majority of Riverdale's teens shopping at Mallhalla, many local businesses are being forced to close up shop, including Pop Tate's Chock'lit Shoppe, much to Jughead's dismay.

As days passed by, Avericci took the opportunity to turn the teens into mannequins after their cards have maxed out. He also casted a spell through the mall's speaker systems to make others forget in case they would notice and lure them back into the mall for more shopping.

After collecting the souls of Archie and his friends, Jughead was the last one to go. Avericci tried to convince him into using his card to buy some food at the mall's buffet, but remembering Pop Tate losing his business, Jughead angrily refuses, eats Tate's burger, and rips up his card. Jughead's defiance then caused the spell to be broken, making him realize Avericci's true colors and plans. Jughead then vows that he will never let Avericci use his friends to pay off his debt.

Enraged by this, Avericci reveals his demon form in an attempt to kill Jughead, but the latter escapes and manages to free Archie and the other kids from captivity by ripping up their cards. As the kids finally escape from Mallhalla before its doors closed shut, Avericci pathetically begs for them to come back, just as the mall finally crumbles down and sinks into the Earth.

With Mallhalla destroyed, all local businesses are booming back to normal (including the Chock'lit Shoppe), and it can be implied that Avericci is sent to Hell for his failure to settle his debt with the Devil. 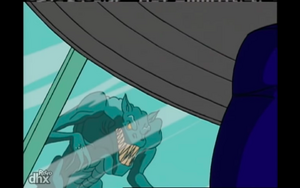 Demon Avericci in the mirror 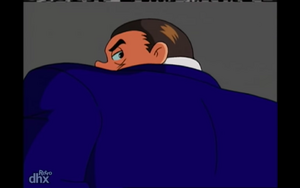 "I couldn't help but overhear". 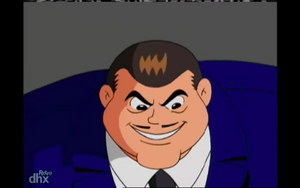 "Allow me to introduce myself". 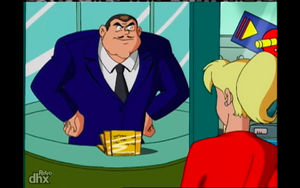 "Indeed".
Add a photo to this gallery

Retrieved from "https://villains.fandom.com/wiki/Mr._Avericci?oldid=4022064"
Community content is available under CC-BY-SA unless otherwise noted.