The Servant with the Glass Eye

Kill Tony Vivaldi and take over his estate (succeeded).

Kill Jack Slater and Danny Madigan (failed).
Use the magical ticket he stole from Danny Madigan in order to bring the infamous villains such as Freddy Krueger, Dracula, King Kong, Hannibal Lecter, Rosemary's Baby, and Adolf Hitler from the cinematic world to our world (failed).

Mr. Benedict is the main antagonist in the 1993 action-comedy film Last Action Hero.

He was portrayed by Charles Dance, who also played David Carlton in Ali G Indahouse, Sardo Numspa in The Golden Child, Tywin Lannister in Game of Thrones  the Master Vampire in Dracula Untold, and Alan Jonah in Godzilla: King of the Monsters.

Mr. Benedict starts out to be one of the villains in the film-within-a-film Jack Slater IV and tries to kill Arnold Schwarzenegger's character Jack Slater. Jack Slater IV is a film that the young moviegoer Danny Madigan goes to see at the cinema. Danny is then given a magic ticket that transports him inside the film, thus making it become real.

Mr. Benedict works for the mafia boss Tony Vivaldi and later comes to know about Jack Slater and Danny working together to stop him; after a face-off with the two, he manages to steal the magic ticket and travel from the movie world into our world, though not before having killed Vivaldi.

Jack and Danny run after him, and soon find out that Benedict has been watching and entering different films. He soon extracts an old enemy of Jack from Jack Slater 3, The Ripper, and gives him the direct order to kill actor Arnold Schwarzenegger so he cannot play Jack anymore. The Ripper fails when Jack arrives in time to stop Schwarzenegger's murder.

Later, Benedict confronts Jack on a rooftop and announces his plan to bring an army of villains to our world, such as Dracula, King Kong, Freddy Krueger, Adolf Hitler, Hannibal Lecter, and even Rosemary's Baby. He then shoots Jack in the chest, but Danny disarms him. Benedict them pulls a knife and begins to wrestle with Jack, but with Danny's help Jack grabs Benedict's revolver and then kills Benedict by shooting him in his glass eye, detonating the explosive inside it and blowing him to smithereens.

On the film Jack Slater IV, Benedict was a suave and charismatic henchman hired by Tony Vivaldi and he also has one glass eye. He was cold-blooded, manipulative, greedy, obnoxious, ambitious, and cruel as the main villain of the film.

Benedict also has high intelligence and advanced skills as an assassin, making him dangerously unpredictable. 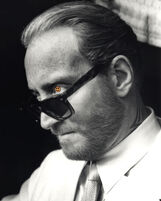 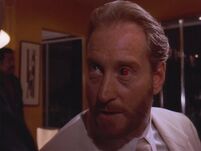 Benedict and his henchmen.

Mr. Benedict's death
Add a photo to this gallery

Retrieved from "https://villains.fandom.com/wiki/Mr._Benedict?oldid=4268097"
Community content is available under CC-BY-SA unless otherwise noted.