Make and sell as much illegal drugs as possible, as well as defeat Max Power and Hit Man (failed).

Mr. Big is the main antagonist and final boss of the 1988 arcade game NARC.

Mr. Big is a wealthy businessman and head of the Mr. Big International. He acts as the leader of K.R.A.K, a criminal cartel involved in the production and smuggling of illegal drugs as well as being involved in other illegal activities, his company acting as a front for K.R.A.K's operations. In order to take down Mr. Big and his criminal empire, the NARC sends two officers, Max Power and Hit Man, to clean up the streets of K.R.A.K's drugs and arrest it's goons.

The NARC officers uncover and dismantle much of K.R.A.K's operations, eventually coming into the Mr. Big International office to arrest Mr. Big himself. He awaits at the top floor of the building, fighting the heroes in a motorized wheelchair with guns. After he is defeated, he strangely transforms into a giant disembodied head (though it's very likely that he went into a giant robot shaped like his head since he was very human-like before this fight began) which is fought in a dark room. After taking enough damage, the giant head's skin falls off to reveal a large skull. Once the skull is destroyed, the NARCs enter Mr. Big's vault and confiscate all of his money.

Mr. Big appears as the main villain in the Power Team cartoon, which features characters from games published by Acclaim. It is never explained how Mr. Big and the other characters got out of their games into the real world, though Mr. Big is shown to possess a device capable of creating portals in and out of the games. In this appearance, Mr. Big never uses his wheelchair and also loses his mustache. The cartoon also makes no mention of his drug empire from the game and turns him into a more common gangster, with his plots involving mostly theft and extortion. 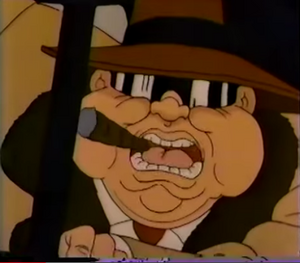 Mr. Big in The Power Team. 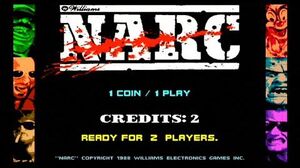 Narc - Arcade Playthrough - Williams 1988 - HD
Add a photo to this gallery
Retrieved from "https://villains.fandom.com/wiki/Mr._Big_(NARC)?oldid=3550895"
Community content is available under CC-BY-SA unless otherwise noted.