Get Professor's Lab Back

Mr. Big Eye is a one-time villain from the 2016 reboot of the Cartoon Network original series, The Powerpuff Girls, only appearing in the episode "Rebel Rebel". He is a giant eyeball monster, created by Professor Utonium, while under the influence of The Beaker Boys.

In "Rebel Rebel", The Beaker Boys tricked Professor Uotnium into creating a giant evil eyeball monster. The Professor created Mr. Big Eye in his lab and he broke through the ceiling and started running amok all over The City of Townsville. Professor Utonium realized he just got played and accused The Beaker Boys of making him create that monster so it would destroy The Powerpuff Girls. The Beaker Boys insisted that the real reason they created it was because they wanted to steal his lab, which they promptly did.

Mr. Big Eye wreaked havoc on The City of Townsville, smashing buildings with his tentacles and blasting things into explosions with his laser eyes. The Powerpuff Girls went up to fight with him. Buttercup used her focused energy aura to make a giant finger to poke him in the eye. However, Mr. Big Eye kept blinking to block her shots. Eventually, Mr. Big Eye got sick of playing with her and whapped her away with one of his tentacles, knocking her down painfully into the pavement below, creating a gaping crater of defeat.

Bubbles came up and started to blast him with her laser eyes but Mr. Big Eye fought back and blasted a giant laser at her. The two of them fought with their laser powers but eventually, Mr. Big Eye overpowered her and blasted her back into the building behind her, asserting his dominance as the master staring contest starer.

Lastly, Blossom dumped a truckload of Hoot Sand all over Mr. Big Eye, smothering his exposed eyeball with sand, leading to him getting painfully knocked down to the ground, with his eye now closed in pain and covered in sand. Blossom thought all was well and dusted her hands off in the feeling of completion but she would soon learn that she celebrated a bit too early, when Mr. Big Eye rose behind her and opened his disgusting, bloodshot eyeball filled with millions of grains of sand, stinging his sclera to a hideously bright shade of red and soaking it with an abundance of gruesome puddles of blood. Mr. Big Eye was understandably very angry with Blossom and he launched a giant blast of laser straight into her, causing a massive explosion that could be seen all the way from an establishing shot of the city.

Mr. Big Eye knocked downtrodden The Powerpuff Girls down to the road and prepared to go in for the kill. Just then, Spongey plummetted from the night skies above, cawing out a heroic warcry, as he hurled down toward Mr. Big Eye. Mr. Big Eye gazed up at Spongey in shock just before he was crushed to oblivion underneath him. When Spongey arose from the ashes of the explosion he had committed, he would reveal that he was now killed with Mr. Big Eye, who's eye was boking through his face hole and his tentacles were coming out all of his side holes. However, now Spongey was in full control of the new body and he became a happy, giggling, good guy, who vowed to protect The Powerpuff Girls and serve The Professor, just like a real hero should always do.

At the end of the episode, Mr. Sponge Eye went down to the new location of The Beaker Boys, picked up their laboratory, shook them out of it, and lept off into the skies to return their stolen laboratory back to The Professor. 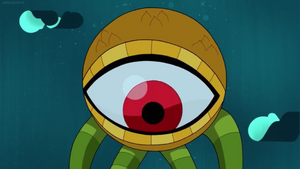 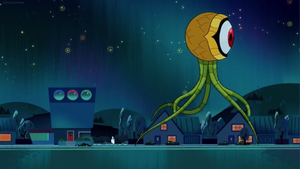 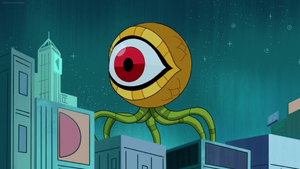 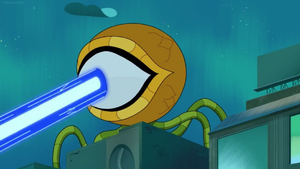 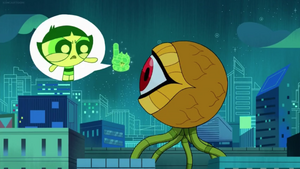 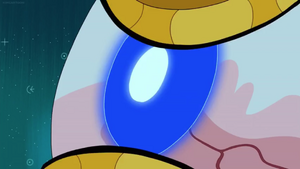 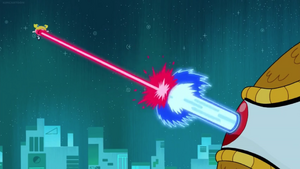 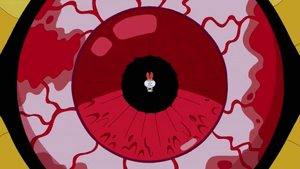 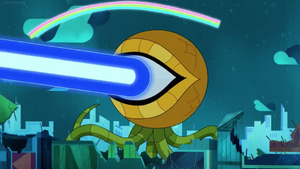 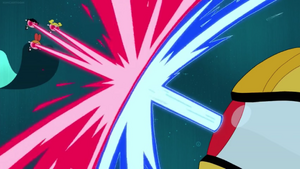 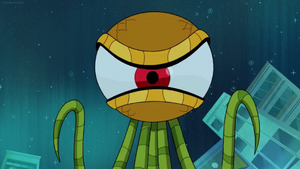 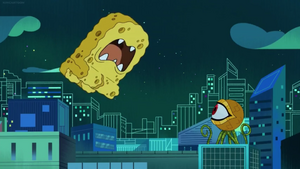 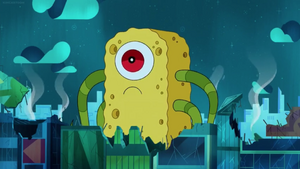