Mr. Black is the secondary antagonist in the Klay World: Off the Table.

He wears a red tie with brown dots but otherwise looks like a generic Klayman. He has a notably short temper. Some examples of his temper can be seen with his interactions with Pick, where he often reacts violently to Pick's mishaps.

He was a normal Klayman, but known as the smartest Klayman alive, but not saying much since most Klayman is incredibly stupid. He was told by Smiling Gary that they had been contacted by aliens. He announced it to everybody and decided that they would build a truck and leave the house in search of the aliens. The way to go, along with Pick and Smiling Gary.

Mr. Black would do anything to find Brown and get his revenge. Chip says he will tell Black where Brown is if he lets him come, Black reluctantly agrees. In the days before the adventure, Black is hostile to Chip and treats him poorly. He also refuses to let Rick come because there "isn't enough room" even though Rick coming was part of the deal. Then they set off in search of the aliens. At some point, they reach a meadow, where Mr. Black admits he has no idea what he's doing.

Chip is outraged by this, and calls Mr. Black a "woman". Mr. Black freaks out and threatens to kill Chip before jumping in the truck with Pick asleep on it and tries to run over Chip, but he misses and the truck falls into a ditch, severely injuring him and barely hunting Pick. Chip and Gary rush over to find Mr. Black in bad shape and dying. Before his death, he tells Chip that they must go back to the house and get Brown's time machine and stop this from happening then he dies.

Much much later, Rick tries to steal the time machine to make sure that Klay World loses against the aliens that they had just destroyed, but Pick rams him with the truck and he falls to his death, destroying the time machine in the process, meaning Black would stay dead forever. 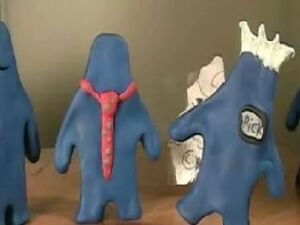 Mr. Black at the meeting board.
Add a photo to this gallery

Retrieved from "https://villains.fandom.com/wiki/Mr._Black_(Klay_World)?oldid=3440272"
Community content is available under CC-BY-SA unless otherwise noted.