Send all of his employees' children to Pluto.

Get rid of the Toiletnator and win the Villain of the Year Choice Award.
Capture the Macaroni art painting of Rainbow Monkey Lisa before Numbuh 3 gets it (until Numbuh 13 lost balance trying to give it to her and accidentally shattered it on her causing her to scream in rage)
Eliminate the Kids Next Door (all failed).

Mr. Boss is a fat, greedy villain and a major antagonist from the show Codename: Kids Next Door. He is Father's right hand. He is Numbuh 3's arch-nemesis and Numbuh 86's father.

Despite the fact that he has not fought with any weapons or technology, Mr. Boss is the #2 greatest enemy of the Kids Next Door, and unsurprisingly, it is Father and the Delightful Children From Down the Lane who top the list. He always has a cigar in his mouth. He is the leader of the Villains who are adults, and has no control over the children villains (either Father has control at least over few of them or they work alone).

As second-in-command of the adult villains, he is also the minor leader of all the common-appearing villains. His three most supportive henchmen are Crazy Old Cat Lady and Mr. Wink and Mr. Fibb. Later, it is revealed in Operation: D.A.D.D.Y. that Numbuh 86 (Fanny Fulbright) is actually his daughter, and that Mr. Boss loves his children, and still cares about them a lot even if they're in the Kids Next Door, including one of his sons Numbuh 85.

His biggest plan before was to transport all girls, then the boys to planet Pluto, but was stopped by Numbuhs 3 and 4. Numbuh 1 calls him Sector V's most biggest enemy, but he was fought only four times. He is a "boss" because Numbuh 3's mother and Numbuh 4's father work for him as boss.

Mr. Boss is a greedy, corrupt, obnoxious, argumentative, and child-hating executive who is president and CEO of a company and acts as the de-facto leader of the KND's rogue's gallery. He loves money and likes adults running things (especially profitable ones). Mr. Boss prefers to have smart and very competent allies to accompany him in his plans as; he disapproves of Toiletnator's help because of how gullible and reckless he is.

Mr. Boss likes making children's lives miserable and has a huge dislike towards Sector V (especially Numbuh's 3 and 1) for ruining most of his evil plans. Despite his vituperative and hateful nature, he loves his own children very much and doesn't mind if they are in the Kids Next Door.

He shows concern if his children are endangered and will do anything to protect them. He even shows remorse if he goes too far when he realizes his actions has emotionally hurt his children. 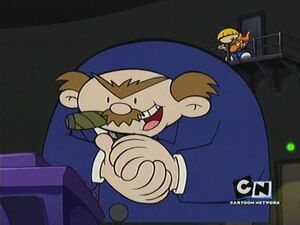 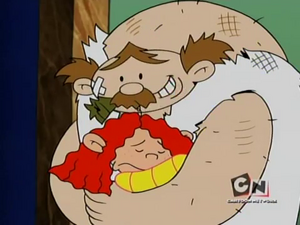 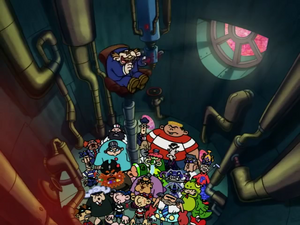 Mr. Boss and his league of Villains. 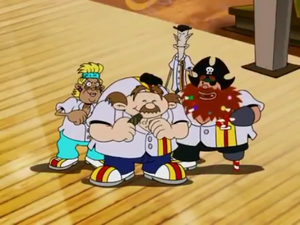