Later in the film it is revealed that Mr. Brown got shot in the head by a police officer, which blinds him but does not immediately kill him. Mr. Brown, Mr. White, and Mr. Orange get into a car to escape the area, but they crash because Mr. Brown was shot in the head and  loosing conciousness. He tries to reverse the car but the getaway car has crashed into a parked car and cannot move eventually stalling the engine. 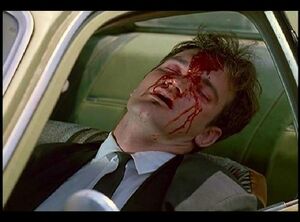 Mr. Brown's death
Add a photo to this gallery

Retrieved from "https://villains.fandom.com/wiki/Mr._Brown?oldid=3820172"
Community content is available under CC-BY-SA unless otherwise noted.