Mr. Bumble (no first name given) is an antagonist from Charles Dickens' 1837 novel Oliver Twist, which has been adapted into many movies and stage-plays. In the musical Oliver!, he has been made famous for singing the title song. Mr. Bumble is an example of truth in fiction as many Victorian noblemen like him abused orphans and the poor during this time-period, though Oliver ultimately escaped his life of misery. He has been played by many actors, including Francis L. Sullivan in David Lean's 1948 film adaptation, Jeremy Swift in Roman Polanski's 2005 version, and by British comedy entertainer Harry Secombe in the 1968 film.

Mr. Bumble was a parish beadle and a respected upper-class man of his town in Victorian Britain. As the church-appointed law enforcer, he was tasked with overseeing petty crimes and violations, and also with looking after paupers and orphans that would otherwise be put out on the streets. When Oliver is born to a homeless mother who dies, Bumble names him according to his system, and entrusts him to a corrupt matron for nine years before taking him to live in the workhouse where he would work for a living, although the workhouse staff only did the bare minimum when it came to childcare.

The children were only served a small amount of cheap food (as opposed to the feast that was served to the visiting governors) that barely kept them alive and the only true care Mr. Bumble and his staff provided was that which was necessary to prevent death, he cared little for psychological or emotional well-being and was not beyond cruelty to children in his care (a trait that was, sadly, all to common in his time-period).

When Oliver picked up the courage to ask for more food Mr. Bumble was quick to take offense and had his staff bring Oliver to him before he went into a gruesome account of the inhuman punishments he had in store for Oliver as a deterent to any other children foolish enough to question his authority.

Later, after taking Oliver to the well fed governors, who decide that Oliver must leave the workhouse,  Mr. Bumble would opt to sell Oliver into child-labor - which would pave the way for the rest of the now famous story when Oliver is finally sold to an Undertaker called Mr Sowerberry. After he gets into a fight with Mr. Sowerberry's apprentice Noah Claypole, Oliver is locked in a coffin by Mrs Sowerberry, who asks Noah to get Mr Bumble due to what she thinks is madness. Mr Bumble states that "it's not madness it's meat" after Oliver picks up the courage to to stand up for himself.

Mr. Bumble is eventually revealed to have ambitions to wealth, when he visits Mrs. Corney, the widow who now owns the workhouse, and openly flirts with her, hoping to marry her and live in her comfortable home and be master of the workhouse. Mrs. Corney, a woman almost greedier and spiteful than Bumble, agrees to marry him, making him head of the workhouse. A few months afterwards, however, Mr. Bumble regrets his choice, when his new wife proves domineering and bad-tempered, and he misses his days as a beadle when he could command fear and respect from the paupers and orphans. Despite being head of the workhouse, he is not actually in charge as his wife is the one that truly in control as she often humiliates him in front of the paupers and order him around. Eventually, he even admits how cheap he himself is when he sold himself to gain very little from the marriage that supposed to give him better wealth and position of power.

When Oliver's new guardian Mr. Brownlow discovers the circumstances of Oliver's birth, he summons the Bumbles to give evidence. Two elderly female paupers reveal that Mrs. Bumble stole a locket from the nurse who delivered Oliver when she died and kept it, instead of using it to find Oliver's true identity. The couple faces prosecution for this.

Mr. Bumble is further horrified to realize that he will be held responsible for his wife's thievery, as the law will assume his wife acts under his command. Bumble's harassing response to Mr. Brownlow & constables is "If that's the eye of the law, then the law is a bachelor. And the worst I wish the law is that his eye may be opened by experience!"

Eventually both the Bumbles are ruined by their crimes and reduced to poverty, living in the very workhouse they once terrorized the orphans and paupers in. Bumble's only small comfort is being separated from his wife, as workhouse regulations required men and women to be separated.

Mr. Bumble is described by Dickens as "a fat man, and a choleric.". He represents the greed and hypocrisy of many upper-class law enforcers and businessmen who speak in high-minded moralism, but use their air of superiority to dominate and oppress poor people. He is fond of telling his associates stories about the poor people he deals with, describing them as greedy, corrupt and ungrateful when they ask him for better food, heat or a better means to bury a loved one. In a similar way, he describes Oliver as a 'villain' for asking for more food, instead of being grateful to the workhouse for feeding him in the first place.

In his speech to Mrs. Sowerberry, he shows he views the paupers and orphans as barely human. He believes feeding Oliver meat allows him to develop a spirit, "What have paupers to do with soul or spirit? It's quite enough that we let 'em have live bodies.".

Though his own behavior is hardly moral, Mr. Bumble enjoys chastising people for the very things he does himself. Just after his open flirtation with Mrs. Corney, he comes across Noah and his girlfriend Charlotte about to kiss. He bursts in on them, breaks them up and orders them to their rooms for their "immoral" behavior, which he himself was just then engaged in. 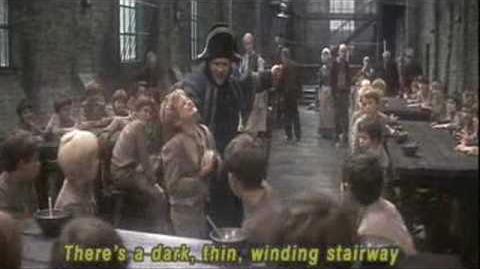 Oliver! - Oliver, Oliver
Add a photo to this gallery
Retrieved from "https://villains.fandom.com/wiki/Mr._Bumble?oldid=4333526"
Community content is available under CC-BY-SA unless otherwise noted.