Charles Montgomery "Monty" Burns, often known as Mr. Burns or simply Burns, is the main antagonist of The Simpsons. He is the founder and chairman of the Springfield Nuclear Power Plant and Homer and Waylon Smithers' leader and boss.

He had a very difficult childhood and has a large desire of various goals. He is Homer Simpson's boss, the main protagonist of The Simpsons.

At some points, Mr. Burns has done non-evil plans. He rewarded Homer for saving his life from a water fountain just to retrieve a penny, he paid for Homer's emergency liposuction in "King Sized Homer" as a reward for saving the city from a nuclear meltdown, and achieved his goal of winning a snowboard competition, which he always wanted to do as a child.

Mr. Burns is rarely shown to have a 'human' sense of feeling however he has been shown to miss things such as his teddy bear Bobo who he lost during his childhood. However, the way he must get Bobo back alternates back to his usual self when he tries to steal the teddy bear back from Maggie Simpson who has grown attached to him. In the end when all hope seems lost Maggie gives Bobo back to Mr. Burns and is later shown being tucked into bed with Bobo by Mr. Smithers. Here, Mr Burns. says he will never let Bobo out of his sight again and drifts off to sleep and a scene begins set sometime in the distant future when humans are replaced by robots and Mr. Burns and Mr. Smithers are both robots themselves. It shows the robot Mr. Burns telling Bobo once more that he will never let him out of his sight again.

Homer sometimes accidentally called Mr. Burns on the telephone and Burns didn't know it was Homer, such as Lisa's Date with Density and Bart Star. He is voiced by Harry Shearer (originally Christopher Collins AKA Chris Latta AKA G1 Starscream and Cobra Commander).

In many episodes of the Simpsons, Mr. Burns is shown to be a villain particularly in Treehouse of Horror episodes. In one particular episode Treehouse of Horror IV, Mr. Burns was a vampire and no one but Lisa knew the truth. However Lisa and Bart find Mr. Burns' secret lair however when Bart is enticed by the 'fun slide' he gets turned into a vampire and when the family find out they are worried he will get worse, and decide that they must killed the head vampire, Mr. Burns. Homer takes a stake and after many fails kills him (while getting fired by Burns), however it is revealed at the end when all seems again that the head vampire is Marge Simpson.

He makes a brief cameo in The Simpsons Movie, where he is first seen getting his toothbrush filled with toothpaste from help by Smithers, then he is seen at the Springfield Church, later his assistant Smithers was in the angry mob (but Burns wasn't in the mob) planning revenge on Homer for causing the Environmental Protection Agency to imprison the city in a strong unbreakable dome. His most notable appearance in the movie was when Apu, Police Officer Wiggum, and Dr. Hibbert asked for electricity and Burns asked for reasons. Dr. Hibbert said he needed the electricity to perform an operation. Wiggum said he needed it to power up the electric chair so they could execute a convict (Burns seemed he was about to cooperate with that one). However, Apu ticked him off (by trying to appeal to Burns' conscience) and Burns pushed a button that released the hounds (telling them "first door on the right"). He was last seen hoping and relieved that the explosive bomb left the dome area of the city. After the credits, it is shown that his mansion has been ransacked, and sits on the staircase with Smithers and says, "Smithers, I don't believe in suicide, but if you try it, it might cheer me up to watch." 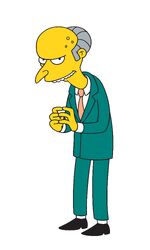 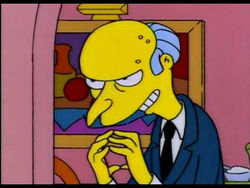 Add a photo to this gallery
Retrieved from "https://villains.fandom.com/wiki/Mr._Burns?oldid=956796"
Community content is available under CC-BY-SA unless otherwise noted.