Carnio/Canio the Clown
The Clown

The Clown at Midnight

Kill Ms. Gibby and the volunteers.

Harlan Caruthers is the main antagonist of the 1998 horror film The Clown At Midnight. He is an insane but devious serial-killer who successfully evaded detection until near the end of the film, framing a number of other people (dressed as clowns) for his crimes while continuing his long crusade of death in an opera house where years previously he had killed his love-interest due to her rejecting his advances: he then began murdering anyone he came across with the use of elaborate death-traps.

He was portrayed by Christopher Plummer, who also portrayed General Chang in Star Trek, and voiced Charles F. Muntz in Up, Barnaby in Babes in Toyland, 1 in 9, The Grand Duke of Owls in Rock-A-Doodle, Arthur Case in Inside Man, and King Herod in The Star, while stunts were done by Rick Skene.

Harlan Caruthers was the owner of an opera house, where he became obsessed with an opera singer named Lorraine Sedgewick. But Lorraine rejected his advances, because she was in love with her co-star Lorenzo Orsini and the two were gonna get married. After a performance of Pagliacci, Caruthers dressed in Lorenzo's clown costume and killed Lorraine in her dressing room. He was never caught and instead everyone blamed Lorenzo, who was rumored to have fled to Europe. However, Caruthers hid Lorenzo in the opera house, effectively ruining his life.

Seventeen years later, a group of high school kids were tasked by their teacher, Ms. Ellen Gibby, with cleaning up the opera house, as she was reopening it. For some reason, Mr. Caruthers decided to dress in the clown costume and murder Ms. Gibby and the volunteers.

After killing off Gibby, Caruthers trapped the volunteers inside by chaining the doors and cutting the phone lines. He went after the volunteers and killed them one by one, until Kate Williams and George Reese were the only survivors. Lorenzo eventually came out from hiding and tried to warn Kate of Caruthers, but she mistook him for the killer. Kate climbed up on the catwalk to get away from Lorenzo, but ran into Caruthers who claimed that Lorenzo was the killer and beckoned Kate to come to him. Lorenzo followed Kate up on to the catwalk where he tried to take revenge on Caruthers, who tossed him off, killing him. Caruthers, then knocked out Kate after she had told him to stay away.

While Kate was unconscious, Caruthers dressed her like the leading lady and tied her to a plastic tree on the stage. After explaining his motives, Caruthers attempts to get Kate to reenact Pagliacci with him. However, George shows up dressed up like Carnio and the two get into a brief scuffle. While they're fighting, Kate works at the rope around her wrists. Caruthers wins the fight and grabs the dagger, attempting to get Kate to sing for him. She doesn't and tells him to kill her already. When he goes to stab her, Kate wriggles free from her binds and crawls away. Caruthers grabs her dress, but she manages to knock over a music stand that held a screwdriver. Kate then stabs Caruthers in the eye and runs to the levers that activate trap doors on the stage. Too distracted from the pain, Caruthers realizes too late that he's standing over one of the trap doors. Kate pulls the lever and sends Caruthers plummeting into the basement where he lands on and is impaled through the abdomen by an assortment of weapons, which kills him and finally ends his reign of terror. 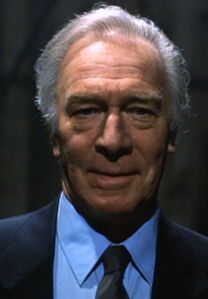 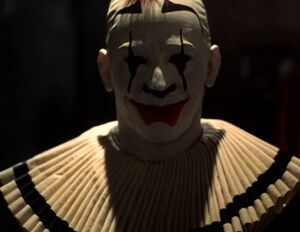 One of Caruthers' many evil grins. 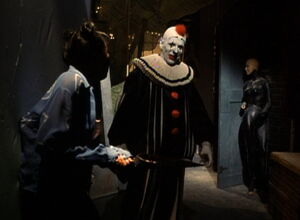 Caruthers walks out from behind the stage after stabbing Monica. 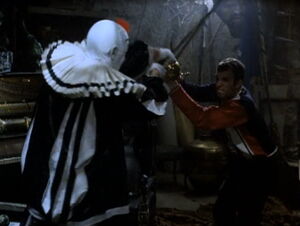 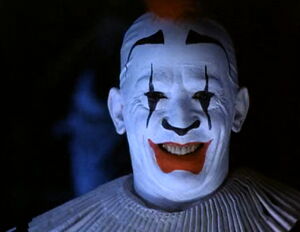 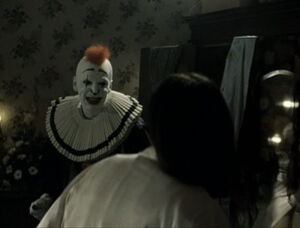 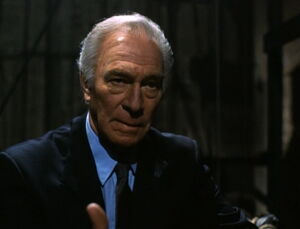 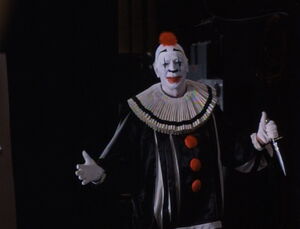 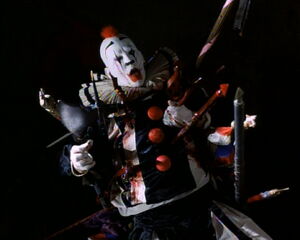 Caruthers' demise.
Add a photo to this gallery

Retrieved from "https://villains.fandom.com/wiki/Mr._Caruthers?oldid=4080626"
Community content is available under CC-BY-SA unless otherwise noted.