In the Masters of Horror segment/short film The V Word, two teenage boys and childhood friends Justin and Kerry go to a morturary out of boredom. There, they encounter the vampiric Mr. Chaney who initiates the conflict.

Kerry and Justin head towards the funeral home on the cue that they would be admitted by Justin's cousin James. But when they get there, they find that James doesn't respond. The two enter and find that James and the entire staff is dead, introduced by the scene of an iPod covered in blood. Suddenly, Mr. Chaney appears and attacks them. Kerry is caught behind and Justin flees, abandoning Kerry to be bitten and transformed by Chaney.

Justin's attempts to contact his parents or the authorities is undercut by their personal affairs and Justin's past history of making prank calls. Kerry appears at Justin's house and eventually reveals him wound to Justin. Under the pretense of being "so thirsty", Kerry then bites and transforms Justin. This leads to further complications as Justin tries to hide this fact but is approached by Kerry who then tries to encourage Justin to act out as a vampire. The two find Justin's father whom Kerry kills when Justin refuses.

In the park, the two come across Chaney, now identitied to be a former grade school teacher and pedophile, who desires to lead a new group of vampires. His intention is to force Justin into accepting his new vampiric existence by trapping Justin's younger sister Lisa on a slab in the mortuary. At the slab, Justin refuses to give in to his new appetites and attacks Chaney, helped when Kerry briefly overcomes his vampiric nature to aid his friend. The two manage to free Lisa and decapitate Chaney with a sawsall, putting an end to the threat. Sadly, the two are still left as vampires-Justin chooses to commit suicide via exposure to heavy sunlight while Kerry moves on, deciding to embrace the vampire lifestyle. 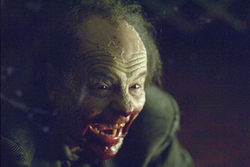 Mr. Chaney in his vampire form.
Community content is available under CC-BY-SA unless otherwise noted.
Advertisement