Shoving Brand X onto store shelves, hating all other brands

Mr. Clipboard is one of the antagonists of the widely panned 2012 animated movie Foodfight!.

Mr. Clipboard was a seemingly mentally crazy man that arrived to Marketropolis six months after Sunshine Goodness, Dex Detective's girlfriend, disappeared. Mr. Clipboard attempted to convince the store owner, Mr. Leonard, to start stocking detergents and other products from a huge parent company called Brand X. When Leonard notified to Clipboard that there wasn't enough room for those items, Clipboard stated that he could make room, and he takes a potato chip bag, and crushes it under his foot. He then leaves the store, and the store owner mentioned that there was nothing wrong with those chips.

Later on in the film, Dex and his friends chase down Mr. Clipboard, and the film reveals that he was actually a robot the entire time. It's also shown that Lady X was the mastermind the whole time, thus making her the film's true antagonist. After her defeat, the Mr. Clipboard robot was most likely destroyed. It is currently unknown how X had acquired the machine. 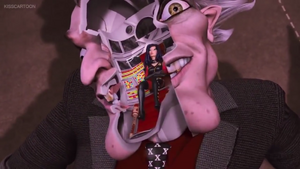 Retrieved from "https://villains.fandom.com/wiki/Mr._Clipboard?oldid=2939323"
Community content is available under CC-BY-SA unless otherwise noted.