Something Wicked This Way Comes

Leader of the Autumn People

Having people joining his forces.

Dislikes getting discovered and caught.
Hates it when people are not cooperating.

Destroy everyone by granting their wishes.

G.M. Dark, better known as Mr. Dark and also known as "The Illustrated Man" and "The Illustrated Marvel", is the main antagonist in the Ray Bradbury novel Something Wicked This Way Comes and its 1983 supernatural mystery Disney movie of the same name. He is a sinister man who is the leader of the Autumn People and he bears tattoos all over his body; one for each person successfully tempted into joining the Dark's Pandemonium Carnival he founded and runs. Mr. Dark initially holds sway over the other main characters, but his power weakens when Charles uses positive emotions against him, something he cannot comprehend or withstand.

He was portrayed by Jonathan Pryce, who played High Sparrow and Elliot Carver.

Dark's background is a mystery, although he refers to being raised in a strict religious upbringing. When asked if he reads the Bible, he replies, "I've had every page, line and word read at me, sir!" Another, perhaps more fitting interpretation of the Bible sequence, given his dismissive nature to Charles and his array of books, would be that he is mocking Charles' belief that the Bible would have any sort of effect in either repelling or hurting him. This would indicate that Dark is not a devil or demon in the Christian sense of the term. He died by getting zapped by the lightning and aging rapidly when he was on the magic carousel.

After Will and Jim purchase a Lightning Rod from Tom Fury, a mysterious train arrives in the town of Greenhill, Illinois, and magically sets up Dark’s Pandemonium Carnival, a twisted carnival. Upon visiting the carnival the next day, Will and Jim sneak into a mysterious carousel (which can magically alter the age of any person who rides it either backwards or forwards) and try to ride it, only to be caught by Mr. Cooger, and Mr. Dark appears in front of them. He gives the two boys each a free ticket.

Later that night, Will and Jim return to the carnival, and discovered that Mr. Cooger was riding the carrousel backwards, and reverts into a little boy thanks to Mr. Dark. The next night, Will and Jim discover Tom Fury being tortured by Mr. Dark, demanding the secret of the next lightning storm. Upon being discovered, Mr. Dark and the Dust Witch summon an army of spiders to attack the two boys, but were saved from the lightning rod.

The next day, Mr. Dark and his freaks marched into town as a search party for Will and Jim. Will warns his dad, Charles, that Mr. Dark is looking for them. Charles then confronts Mr. Dark. 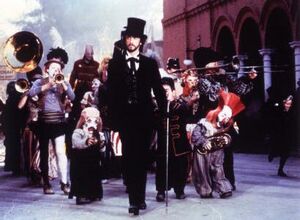 Mr. Dark marching with the Autumn People parading across town. 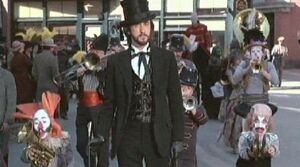 Mr. Dark joins in with the Autumn People's parade celebrating the arrival of Dark's Pandemonium Carnival. 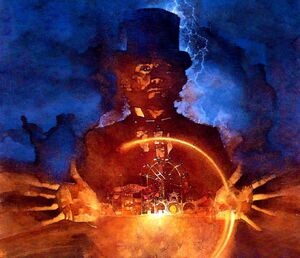 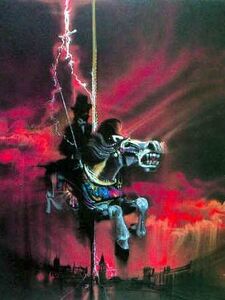 An artwork of Mr. Dark riding on a carousel horse. 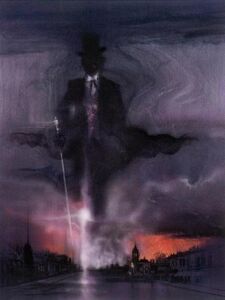 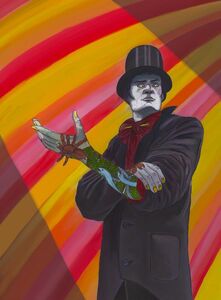 The Illustrated Marvel aka Mr. Dark. 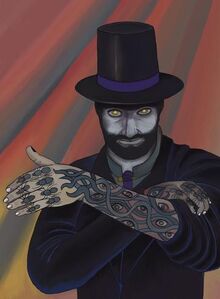 The Illustrated Man aka Mr. Dark. 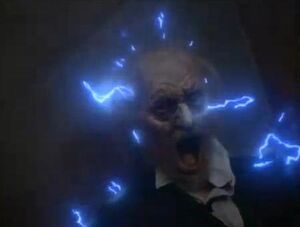