Villains Wiki
Register
Don't have an account?
Sign In
Advertisement
in: The Simpsons Villains, Cosmic Entity, Parody/Homage,
and 11 more

Mr. Dirt is an antagonist in The Simpsons Game.

Mr. Dirt (aka Milhouse, only bigger and he looks almost like King of All Cosmos from Katamari Damacy) is the boss of the level Big Super Happy Fun Fun Game.

Lisa, who was in that weird dimension, once again refuses to be his queen, resulting in him complaining on what more he has to do to win her over, leaving in a huff.

So, Homer and Lisa reach the village, where Blue Sumos (appearing like Comic Book Guy) emerge from the filthy water. Lisa uses the Hand of Buddha to place the three lanterns back in their slots around the well. From it appears Mr. Sparkle, who tells of the disrespectful energy company seeking to take over the land. To restore harmony, Homer and Lisa have to find the three Sparklemon (a parody of Pokémon) in the three corners of the earth. Crossing a field of lava to the Well of Fire, where fire-sumos mock the duo and even make references to Kingdom Hearts by quoting Ansem's iconic line, "Every heart returns to darkness", Homer and Lisa battle Jimbo's Pikachu-like Sparklemon in a Pokémon-style cutscene battle.

After that, Mr. Sparkle converts the Sparklemon into its container. Then, Homer and Lisa go to the Well of Ice, where they defeat Ralph's Squirtle-like Sparklemon. Then, riding an airship into the sky, they enter the Well of Air, defeating Sherri and Terri's unicorn Sparklemon.

After that, they restore the Sparklemon to the village's well, freeing Mr. Sparkle from Mr. Dirt's banishment. As he leaves, Mr. Sparkle cleans the place and turns Mr. Dirt into the ever-pathetic Milhouse, who surrenders his Mr. Dirt key card.

As Homer and Lisa leave, the three Sparklemon beat up Milhouse. 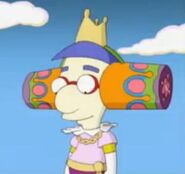