Find the Planispheric Disk and then find the Cursed Treasure of Crystal Cove.

Ricky Owens, better known as Mr. E, is the secondary antagonist of the cartoon series Scooby-Doo! Mystery Incorporated, the eleventh incarnation of the Scooby-Doo franchise. He is the CEO of Destroido Corp. who seeks to obtain the Planisheric Disk in order to find the cursed treasure of Crystal Cove. He is also Shaggy Roger's counterpart of the original Mystery Incorporated.

He was voiced by Lewis Black, who also played Linnux in Rock Dog.

Mr. E is a middle-aged, obese man with long dark brown hair and a dark brown beard. He wears a purple coat with a wax seal contains the letter "E" on it. Inside, Mr. E wears a T-shirt with the colors of yellow and white. He also wears black pants and shoes.

As Ricky when he was still young, he wears similar clothes, but without the coat. Ricky is also notably thin, with little beard on his chin. His pose at the time was similar to that of Shaggy Roger's.

When he was young, Ricky possessed a similar clumsy personality like Shaggy Rogers, and he also views Professor Pericles as a friend similar to how Shaggy views Scooby as a friend.

As Mr. E, he is mysterious, dark, serious, and not to be trusted. Ricky is no longer the boy he used to be, but rather a sinister mastermind who, along with Pericles, commits crimes around Crystal Cove. However, even then, Ricky still shows that he is not truly evil after all, and in his final moments, he tries his best to protect the Mystery Gang, though he failed and got killed in the process.

It is implied that he has a romantic relationship with his fellow member Cassidy Williams.

Mr E. is once Ricky Owens, the equivalent of Shaggy Rogers in the original Mystery Inc.. When he is still a young child, Ricky met Professor Pericles who was injured due to crashing into a tree in his front yard, and nursed Pericles back to health, however the parrot returned and decided to be his permanent friend. Together, they founded the original Mystery Incorporated, along with Cassidy Williams, Brad Chiles and Judy Reeves. During a hunt for secrets in Crystal Cove, Pericles was corrupted by the presence of the Evil Entity and betrayed his gang, along with Mayor Fred Jones, Sr., who forced them to leave the town forever. Ricky disappeared for many years after this.

Now posing as a mysterious man called Mr E., Ricky employs the new Mystery Incorporated on several occasions throughout Season 1. Notably, he called K-Ghoul and said that they shouldn't had brought back the locket that Daphne Blake found in the sewers and that the real mystery had just begun, and scolded Velma for double crossing him and kicking Marcy out of the group, but she hung up on him before he could finish. Mr. E also ordered the new gang to release the imprisoned Professor Pericles and told the Gang to "follow the parrot".

Towards the end of Season 1, Mr. E is revealed to be none other than Ricky Owens, and the true mystery of what happened to the original Mystery Inc. in the past was finally revealed as well.

Eventually Ricky was summoned to a meeting by Professor Pericles, along with the other original Mystery Inc. members. Cassidy, Brad and Judy consequently turned down Pericles, but E rejoined forces with his former best friend, and plotted with him to destroy Cassidy, who began leaving cryptic messages about all of their wrong doings from her radio station. As time went on, Pericles, Brad and Judy had turned against Ricky and, to makes matters worse, Pericles implanted a mutant cobra larvae in his spinal column in his sleep, which put him back under Pericles' control.

Mr E. continued to grow to hate Pericles, as he watched the parrot's methods getting crueler and crueler, so he tried once again to stop the latter, when Pericles told him to make sure the robots killed everyone they had kidnapped for slave labor once they had no more use for them. Despite this, Pericles still managed to force him to continue doing his biddings.

Finally after the Evil Entity was released and possessed Pericles and consumed Brad and Judy, Rick was all that was left. He managed to save Mystery Incorporated from the Entity but was devoured himself. However, in the new timeline created by destroying the Entity and therefore undoing the effects of it's influence, Ricky is seen as being handsome and in good shape, as well as happily married to Cassidy, friends with Pericles again, and the CEO of the Creationex Corp rather than Destroido Corp. 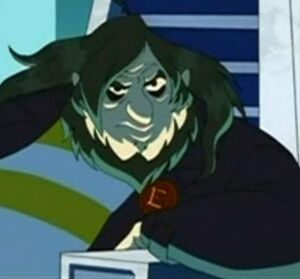 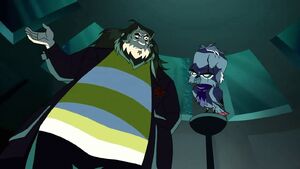 Mr. E and Professor Pericles have a plan. 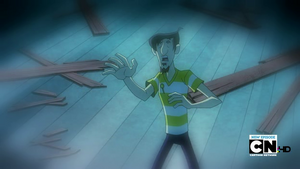 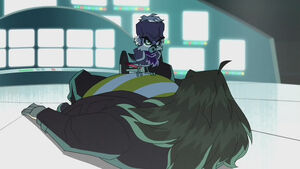 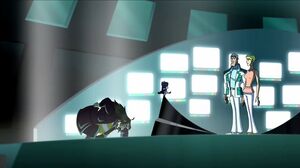 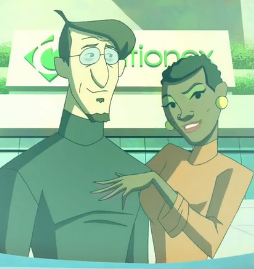 Ricky Owens and Cassidy Williams in the new world.