Second General of the Sons of Garmadon

Mr. E is a silent Nindroid that appears in the TV show LEGO Ninjago: Masters of Spinjitzu. He is Zane's previous rival and almost never talks. His weapons of choice are two red twin katanas. He is one of the three secondary antagonists (alongside Killow and Ultra Violet) of Season 8: Sons of Garmadon, and a minor antagonist in Season 9: Hunted.

He was voiced by Brent Miller.

Before season 8, Mr. E joined the sons of Garmadon. Mr. E was recruited by Killow. Harumi was not aware of Mr. E's past,which still remains a mystery,hence the name.

The Mask of Deception

Eventually, he gathered with 5 other sons of Garmdon members to steal the Oni mask of Vengeance,a mask that allows its user to gain four arms. Two of the members were identified as Luke Cunningham and Chopper Maroon. When they went to steal the mask, they had disguises similar to the Ninja,likely to frame them (Mr.E had a disguise similar to Lloyd,Luke Cunningham had a disguise similar to Zane,and Chopper Maroon had a disguise similar to Kai). When they got to the Borg Tower to steal the mask, Mr. E grabbed his two red twin katanas and cut open a window. Inside the room, were many relics. Mr. E then spotted a photo of Cyrus Borg and removed it,only to show the Oni mask of Vengeance. Luke reached to grab the mask,only to be stopped by Mr. E. He revealed the hidden laser sensors and grabbed his katanas. He placed them both in the small space and grabbed the mask. Just when they were about to leave, Luke pulled out the two twin katanas,triggering an alarm. The building was now on lockdown and metal shutters began to cover the exits. Just as the final exit was about to close, all of the SOG members jumped out of the room. As they were preparing to leave, they heard a voice say "Nice masks". This turned out to be the Green Ninja, Lloyd. The latter then fought the five other members and defeated them. Mr. E then grabbed a zipline and used it to escape. Luke Cunningham followed, only to be chased by Lloyd using the zipline. Seeing as how Lloyd was not too far behind, Mr. E was forced to cut the zipline,leaving Luke behind. Luke was then caught by Lloyd and placed in front of the police. Mr. E then took off his Green Ninja disguise and started to escape on his motorcycle. Lloyd then started to chase the latter using the Ninja Nightcrawler, only for him to turn the other direction. He then started for the Ninja Nightcrawler and slammed the chopping blades of his motorcylce on the ground to escape. He then flew over Lloyd momentarily and opened a parachute. Mr. E had finally made his escape.

Mr. E,Ultra Violet,and other S.O.G. members had arrived at the Royal Palace. Mr. E was confronted by  Kai, Jay, Cole and Nya. The Ninja then pulled out their weapons. Mr. E took out the Oni Mask of Vengeance that he had stolen and put on the mask. The mask then grew two white horns and Mr. E had gained four arms, holding a red katana on each hand. Jay mocked Mr. E by saying "Really? Four arms? Psh. Like that's new". The Ninja were poised to defend themselves against Mr. E as he leaped at them. He knocked over Kai, Jay, and Cole onto the ground momentarily before Nya attacked him. Mr. E blocked Kai,Jay,and Nya's attacked all at once and then kicked Jay onto the ground. Cole then slammed his mallet on the ground causing Kai and Nya to go backwards. Nya and Kai then used their elemental powers (Water and Fire) against Mr. E. They appeared to do no harm to him and Jay had attempted to shock Mr. E. However, this caused Mr. E to create an electrical pulse,causing all the Ninja to fall to the ground. He then shattered a case where the Oni Mask of Deception was kept in. He took the Mask of Deception out and held it up. Kai then threw fire at the mask,causing it to disintegrate, angering Mr. E. This was,however,revealed to be a replica of the original Mask of Deception. Though, not shown on screen,he could have possibly made an escape. 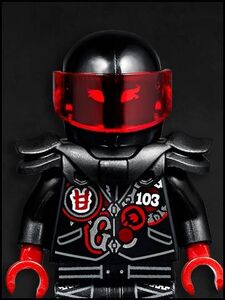 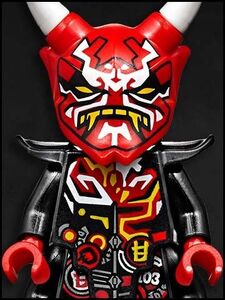 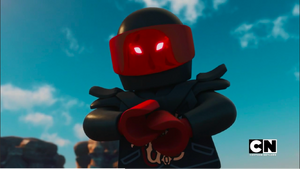 Mr. E is fighting against Zane. 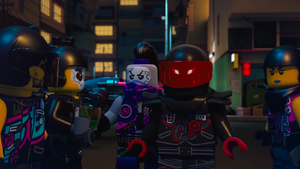 Mr. E and Ultra Violet arrived in the Laughy's.

Mr.E steps forth to Lord Garmadon. 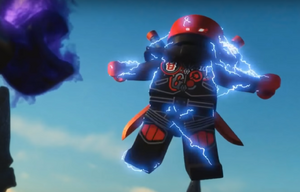