Villains Wiki
Register
Don't have an account?
Sign In
Advertisement
in: Wealthy, Kids Next Door Villains, Cartoon Villains,
and 22 more

Mr. Angelo Fizz is a minor antagonist from Codename: Kids Next Door. He is Numbuh 2's arch-nemesis.

He was voiced by Jeff Bennett, who also provided the voices of Major Man and Professor Dick Hardly in The PowerPuff Girls.

Mr. Fizz is the Hispanic head of the Soda Control Board. He raised the legal soda drinking age to 13 meaning children were banned from consuming it. He enforces this law strongly and dedicates himself to remove the underground soda bars and their suppliers, one of whom being Numbuh 2 of the Kids Next Door. Despite his occupation, Fizz himself is seemingly addicted to soda which possibly provides him an incentive to prevent children from drinking soda. He utilizes many soda based weaponry most notably his combat suit consisting of mostly soda barrels and bottles. He is tall and thin and dons purple shades and white suit with grey suit attire adorned by a red tie and big white shoes. His more notable characteristics are his chin and mustache.

Mr. Fizz debuted in Operation: P.O.P. He catches Numbuh 2 illegally selling soda to an illegal underground soda bar. After his men destroy the bar, he takes Numbuh 2 into questioning. Despite capturing Numbuh 2's fellow operatives, Numbuh 2 refuses to divulge any information. After the children begin ranting angrily, he storms out for a drink. Once getting a drink he looks through the observation window to find the KND escaping. He sends the guards after them but to no avail. Whilst attempting to escape from the Soda Control Board, the heroes discover a factory in which children are getting stuffed into bottles. While they are in shock, Mr. Fizz appears and reveals his plan to keep control over the children. The Kids Next Door rant angrily at Fizz causing him to go beserk. He bellows "soda" and encases himself in his soda based combat suit. He unleashes rivers of soda onto the children. Whilst Fizz battling on the conveyor belt, Numbuh 2 switches the belt on and off, shaking him rapidly. After the belt is stopped Fizz swears vengance however, before he can enact his revenge, the carbonation in his soda bubbles over leading his suit to explode. Afterwards, while the children are enjoying the soda, Fizz, under the watchful eye of Numbuh 2, searches for Numbuh 5 in all the bottles.

Mr. Fizz returns in Operation S.I.X in another attempt to defeat Numbuh 2. He has his spy, Lt. Seltzer, infiltrate an underground soda bar where Numbuh 2 and Numbuh 3 are recieving a mission. Once Fizz is informed by Seltzer of 2's plans, he sends guards to capture the heroes. However they are subdued by Robobradley while 2 and 3 escape. Once they are on the road, Fizz himself pursues them in a Soda Control Board Carbonator. He almost captures them until Robobradley breaks into the carbonator and releases his smell onto Fizz and his minions. However as Mr. Fizz has anosmia (an ability to perceive odours) he is not affected. Fizz catches the skunk but is distracted by an oncoming Carbonater manned by Lt. Seltzer and his men. They crash causing a large soda explosion. This does not stop Fizz as he and his men immediately continue pursuing the heroes in soda related cars. They surround them and Fizz is almost catching up to the truck, however Numbuh 2 initiates the turbo boost created a large distance between them. Whilst Numbuh 2 attempts to deploy the PowerPack emergency brake, Fizz kicks him off the truck and laughs while he hangs on to Robobradley. Numbuh 3 drives the truck into a hippopotamus ranch and Mr. Fizz gloats about he will defeat Numbuh 2 on top of his contraband. Numbuh 3 abandons the wheel to save Robobradley and the truck bounces of a hippopotamus sending Fizz flying. He then finds the heroes at the Yipper Youth Club Playtime Pizza Palace and gloats that he finally caught Numbuh 2 redhanded with millions of barrels of soda. However they discover that the contents of the truck was The Delightful Children From Down The Lane's birthday cake. As they escape, Numbuh 2 realises the roadblock was to stop him from delivering the cake. He optimistically acknowledges that at least they were not caught with any soda, but Numbuh 3 returns with one giving Fizz a devious look on his face.

Fizz also makes other cameo appearances in other episodes.

Mr. Fizz was the main antagonist of the gameboy advance's Operation S.O.D.A. The plot of the game is that the anti-child senate passed the Soda Control Act prohibiting children under the age of 13 from drinking soda. The Kids Next Door are outraged and decide to rebel against the act by providing soda to children secretly (which in real life could never be passed legally as it violates the right for young children to drink soda, which the U.S. constitution forbids laws that violate the rights of others). The game consists of mission where the player goes up against members of the Soda Control Board in order to deliver soda or to disrupt Fizz's plans. Mr. Fizz himself his the final boss of the game. After the battle, the volcano erupts and washes away Fizz's soda. 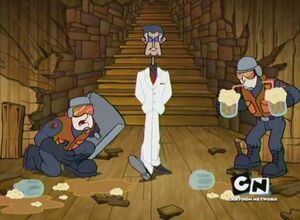 Mr. Fizz walking to bar with his henchmen 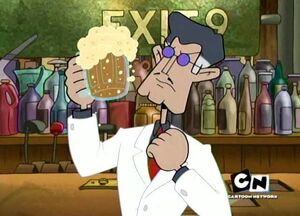 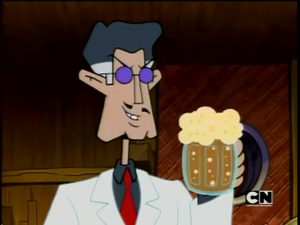 Mr. Fizz seeing kids who were taking away 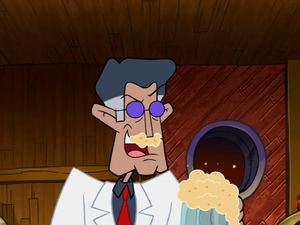 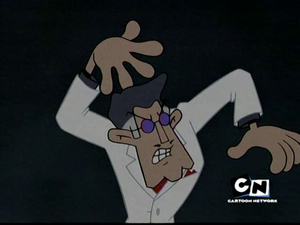 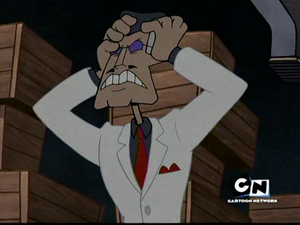 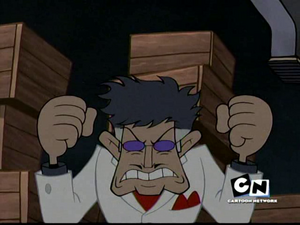 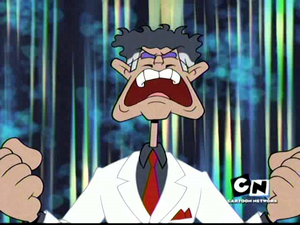 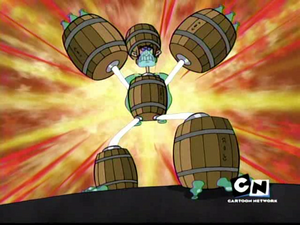 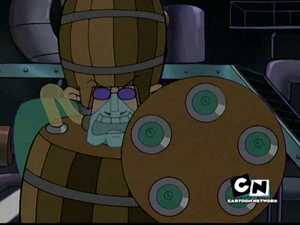 Mr. Fizz was about to shoot Numbuh 3 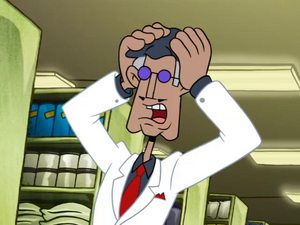 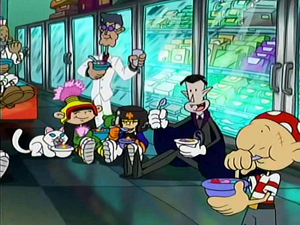 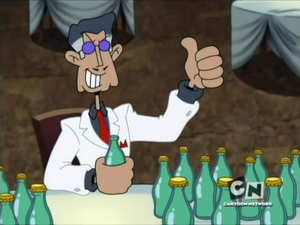 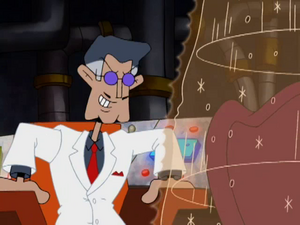 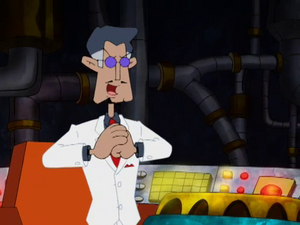 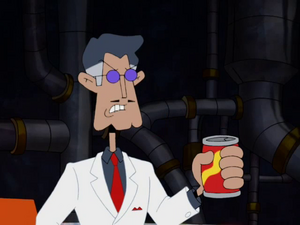 Mr. Fizz holds a can of soda on his hand 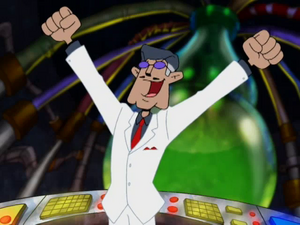 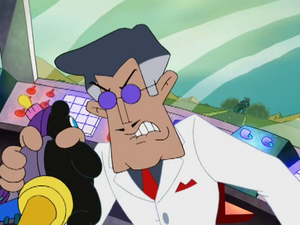 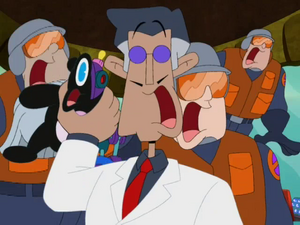 Mr. Fizz was screaming along with his henchmen and Bradley 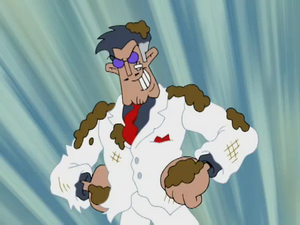 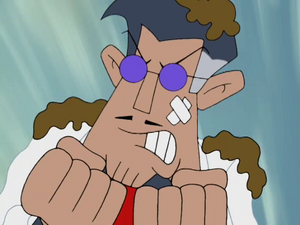 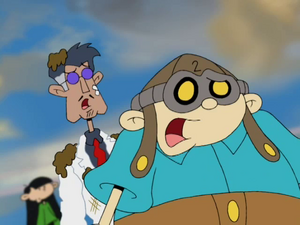