Villains Wiki
Register
Don't have an account?
Sign In
Advertisement
in: Monster Master, Doctors and Scientists, Evil Creator,
and 21 more

Mr. Freeze is a mad scientist who has to stay in cold climates in order to survive. He usually does his experiments in the arctic where he found the Penguin, imprisoned after the first film. With nowhere else to go, Penguin regretfully stayed with Freeze, only to be treated badly by him as a roommate.

This version of the character was voiced by Oded Fehr, who also voiced Equinox in Batman: The Brave and the Bold and Ra's al Ghul in Young Justice, while also portraying Asim Naseri in 24: Legacy, Zankou in Charmed and Jafar in Once Upon a Time.

There in the arctic, an oil platform was being built there, thus invading Freeze's territory. Mr. Freeze, outraged by it, created a device that could turn any living thing into a giant monster. Freeze placed this device on an isopod and it worked. He then sent it over to the oil platform where it caused mass destruction there. But this moment did not last for long. Luckily for the workers, they had a giant laser drill that blasted the device off the isopod, reverting it back to normal. After Penguin witnessed this, he encouraged Victor to test his latest experiment on Gotham's strongest criminals. Freeze reluctantly agreed to this.

Mr. Freeze and Penguin later broke into Arkham Asylum by using a drilling machine. There, they freed Chemo , Clayface, Bane andKiller Croc . They then escape to an underwater lair, where Victor began to experiment on Chemo, Bane, and Clayface. He used their chemical components to create a formula that he tested on Croc and Chemo, which made the both of them gigantic. He then sent the two on a rampage to freeze Gotham.

As the climate became cold enough for him to live in, Mr. Freeze removed his suit and thanked Penguin for his services. But then Freeze betrayed him by pointing his freeze ray at him, knowing that Penguin wanted the city for himself. However, Penguin revealed Bane and Clayface to him, both taking the formula before his eyes. After being double crossed, Victor had no choice but to help the heroes, in order to stop Penguin.

Batman and Green Arrow took on Bane, Chemo, and Killer Croc in giant robot versions of themselves. Meanwhile, the formula that Clayface took had a negative effect on him, which turned his body into lava. Mr. Freeze, trying to redeem himself, helped Nightwing and Robin build a massive freeze ray that turned Clayface into a giant ice statue. After the villains were defeated, they reverted back to their normal size and were sent back to Arkham Asylum. It didn't take long for the Penguin to discover that the ice was melting, thus giving him no choice but to turn himself in.

As for Freeze, he had to put on his suit again. Commissioner Gordon said that he'll be put on trial but will probably still go back to Arkham Asylum. Victor atoned for his crime and admitted that he did this only for solitary.

It was revealed in the movie that Mr. Freeze is mad man. Sometimes, his madness gets the best of him by not noticing Penguin getting more of his formula for Bane and Clayface. But at the end of the movie, it was proven that he wasn't much of a villain, seeing how the Penguin used him. He redeemed himself by helping the heroes defeat the mutated villains. The only wanted thing he wanted was to have solitary, which made him start these series of events.

He is armed with a freeze ray and has a gigantic robotic armor suit that he wears to help him survive in warm climates. 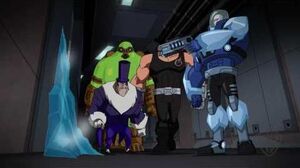 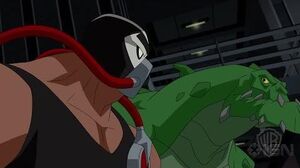