Victor Fries, better known as Mr. Freeze, is a recurring antagonist in the DC Animated Universe, appearing as a minor antagonist in Batman: The Animated Series, The New Batman Adventures and Batman Beyond, and the titular main antagonist of the 1998 film Batman & Mr. Freeze: SubZero.

He is a GothCorp scientist bent on saving his wife Nora who was mutated following an accident caused by his employer Ferris Boyle, making it so he couldn't survive in any warm environment without the use of a special suit. This incarnation of Mr. Freeze is known for completely reinventing the original character from the comics; transforming him from a cookie cutter mad scientist into a deeply tragic villain.

He was voiced by the late Michael Ansara.

Victor Fries was once a stoic scientist who didn't really feel any happiness until he met Nora who later became his wife. Nora is later diagnosed with a terminal illness, so Victor uses equipment from Gothcorp, the company he works for, to put her in cryo-stasis until a cure is found. However, CEO Ferris Boyle shuts the project down because it is costing him too much money, even though stopping the experiment would kill Nora. When Victor tries to save his wife, Boyle kicks him into a table full of unstable coolant chemicals, which causes a major explosion. Boyle flees, leaving Victor for dead.

Victor survives, but as a result of the accident is unable to survive in warm temperatures, and is forced to wear a robotic suit that keeps his body at sub-zero temperature. He becomes obsessed with avenging his wife and killing Boyle. Calling himself Mr. Freeze, he begins stealing Gothcorp equipment, and finally crashes a Gothcorp event to kill Boyle. Batman stops him, and supplies a surveillance tape revealing Boyle's crime; Boyle is then arrested. Mr. Freeze is institutionalized in Arkham Asylum in a sub-zero degree cell, where he tearfully begs Nora's forgiveness.

Months passed, Freeze was kidnapped from his prison cell by billionaire Grant Walker. Walker wanted Freeze to mutate him to become immortal. At first, he was reluctant, but agrees to do so after seeing that his wife Nora is still alive. He later helps Walker freeze the world but turns on him when he realizes that Nora would not love him, but will hate him if he helps Walker with his goal. Freeze turned against Walker and destroyed his utopia society.

Mr. Freeze chose to stay with his wife and secluded himself from the public in a block of ice. The ice eventually drifted into the Arctic Ocean where Freeze found Koonak and adopted him as his own son. Mr. Freeze kept his wife in the containment cell until he could find a cure for her condition.

An exploration crew crashed into Freeze's home, destroying Nora's container which progressed her illness. Mr. Freeze froze the entire crew and traveled back to Gotham City with his wife Nora, Koonak, and his two polar bears to look for his old colleague Gregory Belson who became head cryogenic researcher of Gothcorp. Freeze gave Belson a gold nugget to help him cure Nora with an organ transplant. Since they could not find any deceased donors, they decided to look for living donors.

Belson was reluctant at first but Freeze convinced him to help him by giving Belson a gold vein he found in the Arctic. Among the living donors they've searched, they chose Commissioner Gordon's daughter and Dick Grayson's girlfriend, Barbara Gordon as their donor and kidnapped her. Batman and Robin stopped the transplant and saw that Freeze's lair begins to collapse. Belson refused to continue the operation and tried to escape from the oil rig only to be crushed by the falling debris.

Freeze was still alive but his leg was broken. Batman tries to help him up but Freeze insisted that he, Robin and Barbara rescue Nora and Koonak first. After Koonak and Nora were taken to the Batwing, Batman tries to rescue Freeze, but a pipe hits him, causing him to drop Freeze to a fiery ocean. Mr. Freeze survived the fall and swam with his polar bears to shore. Freeze watched a TV news report about his presumed death and a successful organ transplant funded by Wayne Enterprises that cured Nora of her illness. Freeze walks with his polar bears back home as he was moved to tears of joy, relieved that Nora is finally cured and safe.

Freeze returns his new-found joy quickly evaporated. Nora had recovered, but believing her husband dead, remarried and left Gotham. At the same time, Fries' own condition worsened, and by the time kidnapped doctors were able to stabilize him, Fries was reduced to a head in a jar walking on mechanical spider-like legs, interacting with the outside world with a robotic suit. Faced with no probability of assuming a normal life with Nora, Freeze decides to take out his pain and loss on Gotham by freezing everyone and everything in it. Batman thwarted Fries, who went missing afterward. The next time Fries resurfaces would be decades later in the Batman Beyond episode, "Meltdown".

Fifty years after being thwarted by Batman, Fries' head was in storage at a facility belonging to Wayne-Powers, kept alive by having machines take care of his vital functions and not having aged a minute. Derek Powers, now Blight, is searching for a cure to his mutation. Dr. Stephanie Lake, a young ambitious researcher, recommends growing a new body for Powers, and transferring his consciousness into the new body. Victor Fries was to be the test subject.

Fries was thrilled to be able to feel again after the procedure, and decides to turnover a new leaf. Bruce Wayne is suspicious of his old foe, and instructs Terry McGinnis, the new Batman, to monitor him. Terry was not so convinced on the old man's suspicion. Fries' new found life was short, however, as he inexplicably relapses. At Derek's powers' instructions, Dr. Lake locked Victor in a chamber and increased the heat to weaken him enough to run a biopsy to determine the problem.

Freeze managed to escape, however, and returned to vengeance in his new cryogenic suit, which he had left in cold storage. For Power's and Lake's treachery, Mr. Freeze freezes them, despite Lake pleading for mercy. Lake is presumably killed at this point, encased completely in cold ice and no visible breathing holes. Freeze proceeds to destroy the facility. Batman tried to stop him, but Derek Powers, now in his Blight guise, broke out of his ice encasing and intervened, fighting them both.

Freeze finally managed to dispatch of Blight, blowing him out of the building, but his suit was damaged by Blight's radiation blast. Batman pleaded with Freeze to escape, but Freeze was determined to go down with the building, saying to Batman in a sad, regretful tone "Believe me, you're the only one who cares...", before sealing himself off. Batman escapes as the building collapses and explodes, killing Freeze in the process. Terry later admitted to Bruce that he was wrong about Freeze. Bruce replied that they both were.

Unlike most of Batman's enemies, Mr. Freeze is not actively villainous. He is rather a jaded scientist driven by his determination to save his wife, Nora. However, he is willing to kill anyone in order to save her life, and is more than willing to destroy anyone for getting in his way. Therefore, he is more of an anti-heroic, three-dimensional character, instead of truly evil, due to the fact that, while he is undeniably merciless, Freeze will do anything to save her.

Freeze is somewhat similar Batman, in how they both come off as dark and edgy, yet are of good intentions. However, unlike Batman, Freeze doesn't follow rules or morals, and always takes extreme measures to his actions. Because of this, Batman sympathizes with Freeze, but is unwilling to let him kill for the matter.

Before the incident, Freeze was a reserved scientist who wanted to avoid conflict. However, he is left cold and aloof from the incident that turned him into Mr. Freeze. Nora appears to be the one person Freeze has a soft spot for. However, he does have a sense of honor for other people. He helped Grant Walker freeze the city after helping him save Nora, and when the new Batman (Terry McGinnis) in Batman Beyond saved his life, Freeze managed to return the favor by saving him in return, and tells him to get out of the place before it freezes up with himself in it.

Unlike his earlier incarnations, Freeze is a more serious, no-nonsense character. In the Adam West series, and "Batman & Robin", he happened to be a stereotypical villain who acted silly, and wasn't all that tragic. However, this Mr. Freeze rarely jokes, if ever, despite making some snarky comments during a fight, and is more poetic when using his ice puns, instead of using them as jokes.

Freeze happens to stay calm and collected in every situation, and never appears to lose his temper. He never appears to emote with other people, and tends to answer most comments with a cold, steely glare. However, when he does speak, he chooses his words carefully, and rarely speaks unless it's necessary. Despite his stoic, brooding demeanor, Freeze is more emotional when Nora is the subject. He will without a doubt keep to himself, but clearly loses some of his coldness, when it's about her.

As a result of the accident, Mr. Freeze's normal body temperature left him able to withstand levels of cold that where ordinarily fatal to other humans. The reverse of that was an extreme vulnerability to heat to the point where he could not survive outside of a subzero environment. Another side effect of Freeze's condition was that his body's natural aging process slowed completely. Freeze maintained his body's temperature with a cybernetic environmental suit that also tripled his strength to superhuman levels and was heavily armored.

Freeze's signature weapon was his freeze gun, a ray gun that could create ice from airborne water vapor or any nearby water source. Both the suit and gun were of Freeze's own invention and he developed several other pieces of technology that made him extremely dangerous. 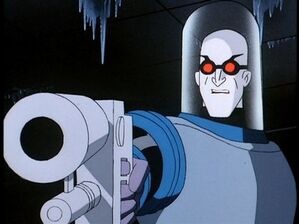 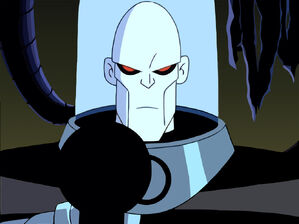 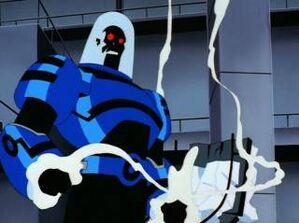 Mr. Freeze in Batman Beyond. 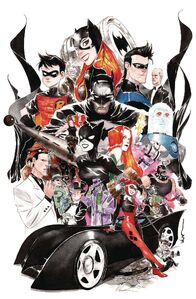 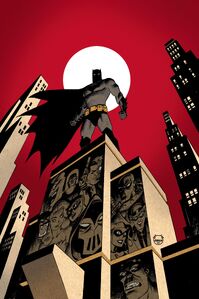 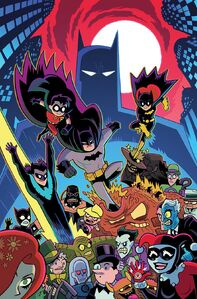 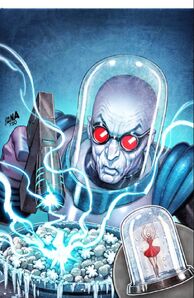 Mr Freeze's Death
Add a photo to this gallery

Retrieved from "https://villains.fandom.com/wiki/Mr._Freeze_(DC_Animated_Universe)?oldid=4169528"
Community content is available under CC-BY-SA unless otherwise noted.