Mr. Freeze is a recurring antagonist in the cartoon series The Batman. In a departure from the character's usual depiction as a tragic villain, this version is a thief and a homicidal maniac.

He was voiced by Clancy Brown, who also played Lex Luthor in Superman: The Animated Series, Mr. Krabs in SpongeBob SquarePants, Byron Hadley in The Shawshank Redemption, Surtur in Thor: Ragnarok, Dr. Neo Cortex in the Crash Bandicoot video game franchise, Savage Opress in Star Wars: The Clone Wars, Gunmar in the Tales of Arcadia franchise, the Evil Entity in the Scooby-Doo franchise, Kurt Caldwell in Dexter: New Blood, and The Kurgan in Highlander.

Before becoming Mr. Freeze, Victor Fries was an average human being with short black hair, blue eyes and a medium build. After his mutation, Freeze's skin was turned white and his eyes are completely red.

Freeze's suit is mostly black with tubes and see-through panels that show parts of both his arms. Freeze's suit gives him a more muscular appearance. The top of his suit also is exposed and covered with ice where his head can be seen.

Unlike the most common portrayal of Mr. Freeze as a tragic villain motivated by love and loss, this version of the character is simply a thief and murderer whose only motivation is greed.

Before becoming Mr. Freeze, Victor Fries was a common bank robber. After pulling off a diamond heist, he found himself pursued by the Batman and ended up being chased into a cryonics laboratory. While attempting to reclaim his diamonds, which he had dropped whilst fending off the Dark Knight, he fell in a cryogenic pod with had a live exposed wire. Fries was electrocuted and his blood was frozen, which mutated him and left him unable to survive outside of a sub-zero environment, while giving him the ability to generate ice and frost.

Fries was later put under observation by a scientist, but he soon escaped and forced the scientist to build him a suit that could contain and grant him better control over his new powers. Fries would then use his newfound abilities to become the supervillain Mr. Freeze.

Mr. Freeze later attacks a ship and other locations around Gotham City to steal the most rarest diamonds getting the attention of Ellin Yin and Ethan Bennit. He encounters Batman once again, but manages to escape and continue with his crime spree. Upon learning Mr. Freeze's identity, Batman questions if he should hang up his cape and cowl, wondering if he creates more criminals than he defeats. He ultimately realizes that Mr. Freeze's condition is his own fault, however, and foils the villain's plan to take over Gotham.

Mr. Freeze later works with Firefly in a plot to plunge Gotham into a never-ending winter. This soon fails when Batman defeats the two to save Gotham. Both villains also end up turning on each other, due to their different attributes and after a fight between Freeze and Firefly, both are left for the police.

Mr. Freeze also rivals Penguin in racing against each other to find and rob valuable treasure hidden under the sea. Mr. Freeze uses Ewan Fripp, Alfred's old friend, to locate the treasure. Mr. Freeze in the end fights Penguin for the treasure, but Batman apprehends both of them.

Mr. Freeze is kidnapped by Rumor, alongside Gotham's other costumed criminals. When Freeze is released, he tries to freeze Batman but accidentally freezes most of the criminals and then Batman opens the cell he is standing on, causing him to fall down. Batman then throws the Kabuki Twins onto Freeze to then lock up the cell, leaving him and the others to get arrested alongside Rumor.

Freeze alongside Penguin, Bane, and Joker later fight The Joining, as well as assisting the police in their battle. Him and Gordan later share a mutual respect for each other after freeze saves Gordan from a robot.

Mr. Freeze is eventually hired by Lex Luthor alongside Bane, Black Mask, and Clayface to kill Superman. Mr. Freeze attempts to stop him from breathing by freezing Superman. However Batman and Robin arrive and defeat him alongside the three villains.

He also tried attacking Gotham after Batman is believed dead (hibernating for one thousand years), but was stopped with the help of holograms of Batman and his neutralizing formula. However, in this instance his appearance was changed into that of a man who had multiple mechanic "arms" from his lower half of his body and with no legs.

He later appears in Arkham Asylum as Batman, Robin, and Green Arrow search for Hugo Strange.

Mr. Freeze, as a result of his accident, generates extreme cold around him. But with the special technology in his cryogenic suit he is able to shoot ice blasts from his hands at will, and project ice-waves around him. He often uses these abilities to create bridges at high areas and paths across the water. He also has created winter-wonderlands and several ice burgs with his powers alone. He also possesses a special heat rod that allows him to heat and shatter any ice he creates. Using this device, he can freeze enemies then shatter them to pieces. 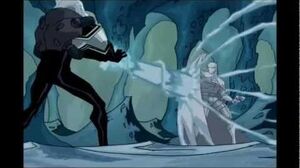