Trying to find a cure for his wife.

Cure his wife, Nora, of her illness by any means necessary (succeeded).

Kill his former boss Ferris Boyle for using Nora as a specimen.

Victor Fries, better known as Mr. Freeze, is a supervillain from DC Comics. He is typically seen as a dangerous enemy of Batman. Although originally a standard villain who used cold themed gimmicks, Mr. Freeze would be reinterpreted into a former cryogenics scientist who became a supervillain upon being involved in an accident that mutated him, making him unable to survive in warm environments without the use of a cryogenic suit. Unlike most Batman villains, Mr. Freeze is typically portrayed as an anti-heroic character, as, in most versions, his plans involve trying to save his dying wife, Nora Fries.

Mr. Freeze's best known origin is that of a man with a dying wife. He froze her in a pod to keep her alive as he attempted to find a cure for her ailment. Then, Gothcorp shut down his project, killing his wife. Soon after, Victor Freeze was caught in an accident that made him unable to go into areas above freezing without his suit. He sought to use his intelligence and ice-based weapons to get revenge on the world.

While in many cases this story has stayed more or less the same, Freeze's New 52 origin casts the sympathetic villain in a different light. Victor Fries worked at Wayne Enterprises where he became obsessed with a cryogenically frozen woman named Nora Fields and came under the delusion that she was his wife (despite the fact she was technically old enough to be Victor's grandmother). Freeze would constantly steal Nora's frozen body in attempts to cure Nora of her life threatening illness. Bruce Wayne knew of Victor's disturbing obsession and eventually tried to stop his research. Freeze became enraged and caused an accident that dosed him in cryogenic chemicals. With his body mutated to only survive in subzero temperatures, Victor becomes Mr. Freeze and continues to pursue Nora.

This origin story was slightly altered during DC Rebirth. While most of the details of Victor Fries' past stayed relatively the same, the major difference is that Nora was once again his wife and not just a delusion.

Mr. Freeze does not appear in the videogame Batman: Arkham Asylum. One of the Riddler's riddles revolves around him.

He does have a entry in the character bios. His profile states:

Victor Fries was a brilliant cryogenicist whose beloved wife Nora was stricken with a fatal degenerative disease. He placed her in suspended animation while obsessively searching for a way to cure her, but the corporation that funded his research – and Nora`s life – pulled the plug, triggering an accident that transformed Fries` body into a cold-blooded form that must always be kept below zero; at normal room temperature he will die. Wielding a number of freezing weapons, he wears protective armor in his quest to somehow bring back his lovely wife and avenge her fate – which he partly holds the Batman responsible for.

In the show, Mr, Freeze, along with the other rogues team up with Sweet Tooth in their plot to destroy the Batman by first kidnapping Robin and holding him hostage, and putting the nuclear Warheads into the city's water supply. 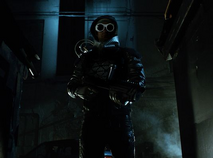 Victor Fries made his debut in the eleventh episode of the second season of Gotham titled "Worse Than A Crime".

He is played by Nathan Darrow. Victor is a cryogenics engineer who is desperate to find a cure for his dying wife Nora. After Nora, unable to witness Victor's desperation and the lengths he is willing to go to save her, tampers with Victor's equipment and dies, Victor tries to commit suicide by use of his freeze formula.

However, he is saved by Professor Hugo Strange who transforms him to Mr. Freeze. Unlike most origin stories he becomes Mr. Freeze before Bruce Wayne becomes Batman.

Mr. Freeze appears as the first hub boss after he somehow broke into the Justice League's watchtower and froze the entrance. He then freezes Joker, Solomon Grundy, Cyborg and Lex Luthor, leaving only Batman and Robin to stop him. If you walk up to Mr. Freeze, he will turn you into a block of ice. The only way to stop him is to use Batman's sensor suit to turn invisible and gain up on him. After Mr. Freeze is defeated, he retreats before Plastic Man turns himself into a sickle to break down the ice wall.

Retrieved from "https://villains.fandom.com/wiki/Mr._Freeze_(comics)?oldid=3467860"
Community content is available under CC-BY-SA unless otherwise noted.