President of the United States of America (currently).

He was the gay Fourth Grade Teacher at South Park Elementary and currently the President of the United States. He is notable for having varied from a jerk to a full-blown antagonist and back again. He is considered to be the most deranged resident of the town of South Park (even more so than Eric Cartman).

Mr. Garrison is horribly racist, homophobic and extremely arrogant, - he was also a somewhat cruel teacher and enjoyed humiliating certain students, he was also a vindictive character and once tried to sue the school for prior mistreatment by using his as-of-then openly gay partner Mr. Slave to perform grotesque acts in front of the students with the aim of being fired - this backfired horribly on him however as he was hailed a hero due to "political correctness".

Despite claiming to be repulsed by Mr Hat's involvement with the KKK, Mr. Garrison engaged in very similar acts himself when he tried to drive away all the "richers" from South Park in one episode - becoming, in many ways, the very thing he professed to hate (this once again highlights Mr. Garrison's often chaotic way of thinking, possibly due to his split personality).

Although not villainous in the sense of harming another being (at least humans), it was implied in an early episode that Mr. Garrison, in addition to being a suppressed gay, also engaged in bestiality—which (if true) would further complicate his already infamous sexuality issues.

When he went back to being a man, he started to become less insane and started to act like a perfectly sane teacher, albeit still being racist, until he was fired by PC Principal and became the 45th President of the United States.

Mr. Garrison is shown to be an abusive, cruel, deficient, manipulative and homophobic (ironic since he is a homosexual or at least bisexual), as well as a vindictive and racist individual. He loves to force his beliefs on others, it is his attitude which led to a post-Apocalyptic future where three warring Atheist sects are emulating his beliefs. During the Christmas Specials, he freely calls Jews, Hindus, and Muslims heathens who don't celebrate Christmas while saving his greatest amount of vitriol for the Japanese.

This is shown explicitly during "Follow that Egg!", where Mr. Garrison tries to 'take back' Mr. Slave and gets enraged that Mr. Slave has moved on is in engaged to Big Gay Al. He believed he was taking Mr. Slave back and thought that his old boyfriend only left due to Mr. Garrison calling him a "faggot", ignoring that Mr. Slave said he doesn't like women and that Mr. Garrison never even consulted him before the surgery. To sabotage their wedding, Mr. Garrison turns the parenting exercise he gave his class into a rigged experiment to prove gay couples cannot take care of children. And to this end, he is willing to murder people as shown in the final part, nearly killing Stan and Kyle when they show off the egg being perfectly fine.

Garrison is a common antagonist in South Park. Most notably, he served as the main antagonist of the episodes The Death Camp of Tolerance, Mr. Garrison's Fancy New Vagina, Follow That Egg and Go God Go!!!. He became a more major antagonist as he began his presidential campaign, serving as the overarching antagonist of Seasons 19 and 20, one of the two main antagonists in Season 21 (alongside Eric Cartman) and a cameo character in Season 22.

In the Season 23 episode Season Finale, he somehow returns to his role as president and receives a phone call from Randy Marsh, asking for his help to be released from prison, while also having ICE (Immigration and Customs Enforcement) centers hold Mexican kids, while their parents get deported back to Mexico.

In the season 24 special episode, The Pandemic Special, Garrison serves as the secondary antagonist and the bigger bad and undoubtedly crosses the Moral Event Horizon. He intentionally hinders any progress to deal with the Coronavirus pandemic because he sees it as a way to kill off Mexicans. He ignores the immoral nature of this as he's committing indirect mass murder and the fact that the pandemic is affecting the entire country and the world itself. Later, when scientists finally re-acquire the animal needed to study and help develop a potential vaccine for Coronavirus, Garrison shows up with a flame thrower and uses it to kill the creature and scientist, dooming the world so he can succeed with his twisted personal agenda. 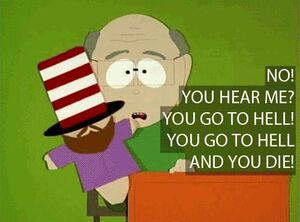 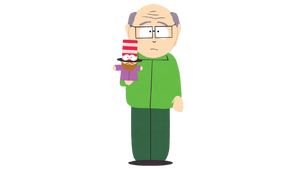 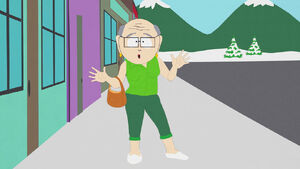 Mrs. Garrison
Add a photo to this gallery 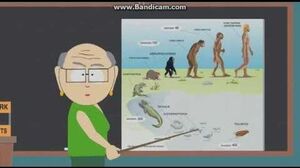 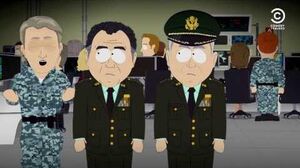