Leader of the Byrum

Infect all life forms on Earth with the Byrum (failed).

Mr. Gray is the main antagonist of Stephen King's 2001 novel Dreamcatcher, and its 2003 live-action film adaptation of the same name. He is the alien commander of the Byrus species and he plans to infect the entire world.

Whilst possessing Jonesy, he was portrayed by Damian Lewis.

Mr. Gray's origins are shrouded with mystery. One of the few confirmed facts about him is that he is the last of his kind, after his home planet and the rest of his species were destroyed by humans. Eventually, Mr. Gray stowed away on one of the human ships, and rode back down to Earth and waited quietly for the right time to exact his revenge.

When a stranger enters Jonesy's cabin from the blizzard outside and dies when an alien parasite eats its way outside and kills Beaver, Mr. Gray reveals himself to Jonesy before his head explodes into a red mist that Jonesy inhales, allowing Mr. Gray to take over his mind.

As Mr. Gray (while possessing Jonesy) continues his plan of world domination, Jonesy's consciousness is trapped in his mind and notices how Mr. Gray is "enjoying" human senses and emotions and temps the alien to accept it. Mr. Gray refuses, as he does not want to go against his race's hive-mind. Though he does start to grow a sentient personality once he realizes he enjoys killing people.

From Jonesy's telepathic ability, Henry learns that Mr. Gray plans to contaminate the water and recruits Duddits to help him stop the alien. They corner him near the Quabbin Reservoir in Massachusetts where Mr. Gray is attempting to send his Byrum worm companion into the lake and kill it. Using his powers, Duddits uses his powers to force Henry and Jonesy into a place in which Mr. Gray can become vulnerable. Mr. Gray laments how he should have accepted Jonesy's offers in the first place before the latter kills the alien by smothering him with a pillow.

An alien ship crash lands in Derry, Maine, carrying gray aliens and the Byrum. The ship is destroyed by Colonel Curtis and his men, killing all of the gray aliens except for Mr. Gray, who sets his invasion plan into action by spreading the Byrum to infect numerous people and animals from around the area.

One of the survivors named Gary "Jonesy" Jones is able to restrain the Byrum from attacking him due to his psychic powers given to him by Duddits, and his brain being "half-dead" due to a car crash months prior. Mr. Gray notices this and possesses Jonesy, locking his consciousness within his mind.

When Pete returns after killing a Ripley that eats one of Rick's hunting companions, Mr. Gray as Jonesy questions him for Duddits' whereabouts and offers cooperation. When Pete refuses, Mr. Gray briefly leaves Jonesy's body to bite Pete in half while Jonesy's consciousness watches in horror. Realizing that the alien possessed him for information on Duddits, Jonesy hides his memories of Duddits from Mr. Gray and telepathy warns Henry to protect Duddits.

From Duddits, who is dying of leukemia, Henry learns that Mr. Gray plans to contaminate the Quabbin Reservoir with the Ripley. Meanwhile, Mr. Gray kills a truck driver to steal his truck and poisons his dog to make it stop barking. A cop pulls him over for speeding, but Mr. Gray kills him too, taking his police car the rest of the way to the Reservoir.

Henry and Duddits track Mr. Gray to outside the Reservoir in a water supply shed and Henry shoots the Ripley before Mr. Gray could slip it down the drain. Recognizing Duddits as the one who gave Henry and Jonsey their psychic powers, Mr. Gray leaves Jonesy's body to impale Duddits with his tail, but realizes too late that Duddits was also an alien all along. He covers Mr. Gray in a cocoon that explodes in a red mist resembling a dreamcatcher, killing both of them. Back to normal, Jonesy steps on the final Ripley larva before it can escape.

Mr. Gray is an entity who comes across as somewhat affable when he is in control, talking using psychic powers. But when he loses control, he throws away the charade to reveal he only cares for himself. Mr. Gray merely sees all humanity as an inferior species that he will stop at nothing to wipe out. In the novel, his hatred was due to humanity wiping out most of his species and wants to take revenge. In the film on the other hand, this excuse is never mentioned nor referenced, instead portraying him as nothing more than a sadist who wants to replace humanity with his own species so he may rule over the Earth. 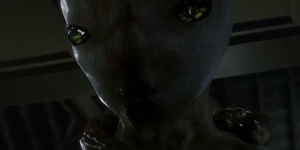 Mr. Gray about to possess Jonesy. 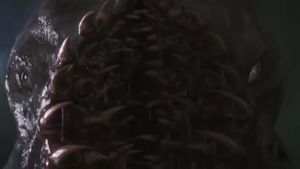 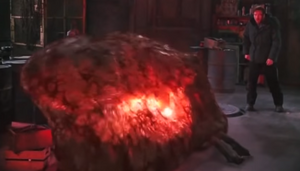 Mr. Gray about to explode in Duddits' cocoon.
Add a photo to this gallery

Retrieved from "https://villains.fandom.com/wiki/Mr._Gray?oldid=4136828"
Community content is available under CC-BY-SA unless otherwise noted.