Norm of the North

Incorporate houses in the Arctic.

Dispose of Norm and his grandfather (all failed).

Mr. Greene is the main antagonist of the critically panned 2016 Indian-American animated film Norm of the North. He is the owner of Greene Homes who seeks to turn the Arctic into a real estate location.

He was voiced by Ken Jeong who also plays as Leslie Chow from The Hangover, King Argotron in Role Models, Ben Chang in Community, Neil Lyman in Furry Vengeance, and Sprout Cloverleaf in My Little Pony: A New Generation.

Mr. Greene portrays as a hippie wearing a dark blue sweater and a pair of brown shaded green pants, he has glasses and a gold necklace. He has brown eyes, bold on top with long black on the back which the end forms into a ponytail, and a beard.

Mr. Greene is a shallow, greedy, and melodramatic businessman.

Mr. Greene is the CEO of Greene Homes. He plans to build luxury houses in the Arctic. When Norm's grandfather knew something was wrong, he was captured, leading others to believe he disappeared.

A portrait of Mr. Greene was shown in one of the model homes in the Arctic when Norm, his three lemmings friends, and Socrates went to investigate in the place of Norm's grandfather.

When Vera Brightly, chief marketing officer (CMO) of Greene Homes, arrives to the Arctic, a video chat between her and her daughter, Olympia, the latter mentions him when she questions her mom about the changes they will do. Vera reassures her that if the campaign works and the houses sell, greats things will happen to them.

Mr. Greene physically appeared on a video chat with Vera, saying something went wrong but Mr. Greene assured himself that "there are no problems just messages from the universe" and has Vera joined in meditating until she broke the news that the director quit. Shocked, he fumbled off the chair, scolds her, knowing she shouldn't have hired that "overpaid, presumptuous" director, demanding how she'll fix this. Vera showed him a recording of Norm chasing after her, thinking its cute until he saw it, showing that polar bear is a star, he would use an actor to get approval from the Polar Council, exciting that he's going to be rich, orders the commercial and the model house back, using a polar bear actor to sell the Arctic.

When Norm the polar bear traveled to New York to stop the luxury condos from shipping to the Arctic, he found out that Mr. Greene is responsible.

During the trip, Mr. Greene promised Vera to get her daughter in the Magister Mundi Academy.

He first made his debut when one of his employees, Vera Brightly, making advertising deals to make the arctic more luxury.

When first met, Mr. Greene thought Norm was just an actor in a polar bear costume, when Norm roared at him, he freaked out. He didn't like it saying he's too authentic until he saw Norm dance, he tells Vera to take him out to lunch. However, when Mr. Greene recognizing his scent, he knows there is a similarity with the one he caught, Norm's grandfather. Believing Norm to be an "assassin", he gets a tranquilizer gun and goes to the fish restaurant.

Trying to take him out, Norm turns the tables and throws the tranquilizer gun to Chef Kozawa to shoots him. Upon reawaken, seeing the views on YouTube about his "outburst" and Norm's actions, Mr. Greene decided to use for advertisement on his luxury houses. Also, he lets him sleep and his lemmings in the model home while the same time keep a close eye on him.

During the time, Norm and lemmings were eavesdropping on him, discussing the condos with Councilwoman Klubeck, who admits she and Polar Council let extra tourists in the Arctic for him. Mr. Greene also sends plans for condos in the Bahamas with shower heads that will "wash the guilt" but Klubeck doesn't have any of it and just wants to this to push through. Ending the video chat, Mr. Greene congratulates himself. Hiding the flash drive in the desk, Mr. Greene left, unknowingly, the lemmings disabled his camera and stole the flash drive.

At Tamecia, Mr. Greene saw Norm's popularity is growing, making his approval ratings increase as well. Reaching the approval rate, Councilwoman Klubeck states it can't work until Norm publicly announced "I support Green Homes in the Arctic". Mr. Greene then gets an idea.

At 71 Greene Homes Square, after Norm and lemmings finished their dance, as Norm was about disapprove, Mr. Greene edited a voice recording of him saying he approves. Crushed on his plan was foiled, Norm storms into Mr. Greene's office who thanks him for his "support". Mr. Greene made four homes and sold them, however, Vera pointed out he can't do that without the Polar Council's approval, adding its illegal. Mr. Greene didn't care, knowing someone approved, and he's above the law.

When Norm chased and went into limo the investors were in, he explained everything. One of the them, Pablo, concludes the Polar Council are aware but Norm gives him the flash drive, seeing Mr. Greene and Councilwoman Klubeck's corruption on his laptop. Speaking him through video chat, he scolds for being corrupt, taking their money under false pretense, also saying he's fake as his ponytail clip up. Seeing his flash drive gone, Mr. Greene stated it doesn't matter, since the homes are sent and once they land the investors contractually obliged to fund the rest.

After hearing Norm freed his grandfather, his employees stun them with tranquilizer darts. However, they escape and send the condos plummeting into the bottom of the ocean, at home, Vera sees Olympia's books and a picture of Mr. Greene on it, seeing her daughter what she feels and remember her words Vera wrote an e-mail letter saying she's quit.

At the end, Mr. Greene was getting angry glares from the public. Getting a call saying they never got there, he demanded it was joke until a shock came upon him when he "two polar bears" sank them. Looking up at a large television screen, showing that Mr. Greene and Councilwoman Klubeck are under investigation for bribery charges. Seeing the citizens angry, Mr. Greene commented that the condos were never meant for them but the "1%". Seeing them ganging up, Mr. Greene hangs on as he falls into a manhole. There, he was greeted and mocked by his receptionist. Pleading for help, Janet closes the lid on him, with his ponytail sticking out of the edge. Screaming and insulting them for help, question them do they know who he is until he was screaming, stating they were rats.

It is unknown what happened to Mr. Greene afterwards as he does not appear in any sequels during the rest of the franchise, but it's likely that he was been killed by the rats. 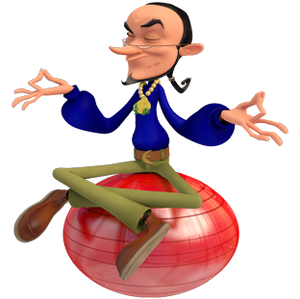 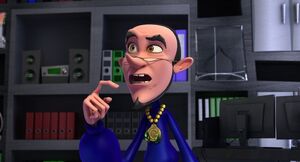 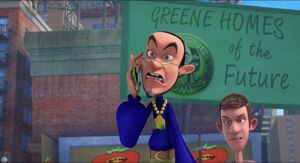