Feeding on souls.
Being with his father.

Mr. Grimm is a skeletal being that feeds on souls and a villain from the Twisted Metal games.

Mr. Grimm was a collector of souls that had a deal with Calypso, but he eventually sought to claim Calypso's soul.

In his ending, Calypso welcomed him to his lair and said he could have any prize he chose, but Grimm stated that he wanted Calypso's soul. Calypso protested that it wasn't time and that they had a deal, but Grimm said there was no deal this time and chained him to the back of his motorcycle before riding off with him.

Mr. Grimm was a strange skeleton creature that fed on souls with ravenous hunger. Driven to make more souls available for him to devour, he joined the

The Twisted Metal competition so as to bring death and destruction in the world to a new level and cause the Apocalypse.

In his ending, Grimm explained to Calypso that he’d become somewhat addicted to feeding on souls and he couldn’t cause enough death on his own. Grimm said he wanted humans to start dying faster and told Calypso to do whatever it took to do that. Calypso used his powers to turn the world into a bloody battleground with humans killing each other like crazy. The souls came flooding in and Grimm was ecstatic at first, but eventually, humankind wiped itself out, leaving him without any souls to feed on.

Mr. Grimm returned to compete in Twisted Metal, now having had his fill of mortal souls. Thus he wanted to feed on the blackest and most powerful soul available, that of Calypso so that he could become all-powerful.

In his ending, Grimm demanded that Calypso give him his prize being Calypso's soul, only to be struck down. The bitter irony is that Calypso struck him down with the sole of his shoe.

Mr. Grimm, now the pirate, Captain Grimm, joined the Twisted Metal Tournament, apparently seeking vengeance on Sweet Tooth (and for some reason, letting his parrot talk for him).

In his ending, Grimm demanded a sword fight with Sweet Tooth and the soul of the first one struck dead. However, in the fight, Sweet Tooth cheated him by killing his parrot.

Unlike all the others before this version of Mr. Grimm is a former soldier who after being pushed beyond his breaking point snaps. After losing his best friend to war, Mr. Grimm is forced to eat his friend's corpse to survive and is eventually put into an insane asylum. After thirty years he is offered a chance to get his revenge on the man responsible for all his misfortune.

A disturbed boy obsessed with Halloween, Mr. Grimm entered Billy Calypso’s tournament seeking the portal to Halloweenland, a mystical land where it was Halloween every day of the year.

In his ending, Calypso showed Grimm the portal, but warned him he might not want to go in. However, he ignored the warning and ran inside, only to be confronted by a pack of horrible monsters.

Mr. Grimm became the Grim Reaper after he died and performed the job for centuries. But at one point, he devoured a soul instead of bringing it to the afterlife and was instantly hooked. Grimm soon found himself feeding on more and more souls until finally, he was devouring more than he was moving on. Pushed to the brink of madness and unable to take doing his job anymore, Grimm entered the Twisted Metal tournament, hoping to get Calypso to give the position of Grim Reaper to someone else.

In his ending, Calypso appeared to congratulate Grimm on his victory, but the reaper ignored him, devouring a soul to sate himself. Calypso asked if he felt better, but Grimm said he didn’t and that he couldn’t deal with his addiction anymore, it has grown beyond his control. He begged Calypso to help him and Calypso said he could help Grimm any number of ways, but he needed to specify what he wanted. He asked Calypso to make someone else the Grim Reaper so that he could become mortal. Calypso did just that, turning a nearby little girl into the Grim Reaper, while transforming Grimm into a human. He became ecstatic, thanking Calypso, and ran about, declaring that he was free, only to be hit by a truck and killed.

In the 2012 game, Daniel Grimm was a normal human and the son of a motorcycle stuntman. He was extremely close to his father, but one day, he was killed in one of his jumps. Mr. Grimm’s life began a slow downward spiral after that night, until he became a major criminal and murderer, leading his own gang, the Skulls. However, Grimm learned of the Twisted Metal Tournament and how Calypso offered the winner any request they wanted. Determined to go back in time to prevent his father from making the jump that ended his life, Mr. Grimm entered Twisted Metal.

In Sweet Tooth’s story, Mr. Grimm and his gang engaged Needles Kane in a pair of heavily modified monster trucks, dubbed the Brothers Grimm. They had been promised that if they killed Sweet Tooth, they would win a spot in next year’s Twisted Metal tournament. The clown managed to destroy one of the trucks, prompting Grimm to activate a powerful suit of armor on his truck. However, Sweet Tooth drove under the truck, allowing his gunner to climb on the bottom and plant some C4. The clown detonated it, destroying the armor and finally took down the other truck. In his story, Mr. Grimm’s first match was in Diesel City, where Calypso welcomed him, noting that it had seen better days and it reminded him of Grimm. He then explained how things worked and told him his journey to change the past began here. Grimm managed to win the match and continued to advance through the tournament until he headed to

Devil's Canyon for his final event. There, Grimm was confronted by Dollface piloting a giant robot called the Iron Maiden and her gang, the Dolls. Using a missile launcher left by Calypso, Grimm succeeded in damaging the Iron Maiden enough to lower its force field, before shooting it down, leaving it clinging to a bridge. He managed to knock the Iron Maiden into the pit below, but Dollface detached the robot's head, which flew up to try and kill him one last time. Grimm managed to take Dollface down for the final time and went to Calypso to collect his prize, crashing into his office through the window on his motorcycle. Grimm demanded to be sent back to save his father and Calypso sent him back in time,

putting him in the backseat of his father’s truck with Grimm’s younger self and his father. Thinking Grimm was trying to attack them, his father started grappling with him, causing the car to crash and killing him anyway. Grimm awoke to find his younger self with his father’s gun trained on him and before being shot, he thought to himself that he would’ve done the same thing.

Mr. Grimm’s primary vehicle is a motorcycle that shares his name (though it is called Reaper in the 2012 entry.), which is fast and maneuverable and has a mounted gun, though it can’t take much damage. It can also fire hellish skulls, though, in the first game, it could unleash the souls of the dead and in Black, it could fire an exploding scythe. In Twisted Metal (2012), the rider can throw chainsaws, which they can drag on the ground to set ablaze, and use an RPG. 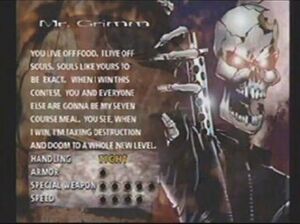